A rienne Rich is one of the most inflencial feminist writers of the twentith and twenty-first centuries. Her collections of poems and essays won numerous awards over her lifetime and since her death.

‘Diving into the Wreck’ is the title poem of the collection for which Rich won the National Book Award for Poetry. The poem opens with the speaker preparing for a deep-sea dive. It follows her into the water and into an extended metaphor that compares the dive to the struggle for equal rights for women. The poem is filled with powerful symbols and an expression of that struggle.

‘Aunt Jennifer’s Tigers’ is a clever and multilayered poem that describes a woman’s needlepoint project. The imagery depicts tigers moving through a green landscape. The speaker describes how fearless these creatures are in the face of the men who watch them and contrasts that fearless attitude and confidence against Jennifer’s oppression and struggle.

‘Living in Sin’ is filled with poignant images that depict a woman’s romantic relationship and the disappointment of reality. The poet brings together a series of images from her female main character’s life. These coalesce into a larger depiction of the mundanity of her world, one which was supposed to be filled with romance and happiness.

‘Dreamwood’ describes the nature of poetry. The speaker describes the seemingly basic details of her typing desk. It is an extremely functional item but it also contains all the markings of a landscape-like map. The map transforms into something that describes her life. It shows the ups and downs and progress towards one particular way of being. In conclusion, the speaker relates the material structure of the table to the dream-like qualities of thought and poetry.

‘Amends’ is a beautiful poem that describes the movement of moonlight as it traces and soaks into the surface of the earth. On the particular night that this poem describes, the moon’s light is especially meaningful. It is forced to travel through gash-like “quarries” and across the vast piles of waste humankind has discarded. The light finally rests on the eyelids of all the sleepers, hoping to “amend” the actions of humanity.

Adrienne Rich was born in Baltimore, Maryland in May of 1929. She was one of two girls born to parents, Arnold and Helen. Her father was a pathologist and chair at The Johns Hopkins Medical School, and her mother was a pianist and composer who gave up her career to raise her children. Rich’s love of literature was first encouraged by her father who promoted both reading and writing poetry. From within her father’s library, she gained access to the works of John Keats, Christina Rossetti, and Henrik Ibsen.

Rich went into the public school system in the fourth grade and would later describe her childhood as being filled with high expectations for success. Rich later attended Roland Park Country School which was where she first learned to look up to women as professional and intellectual roll-models.

In 1951, after focusing on poetry and writing, Rich graduated from Radcliffe College. Her first collection of poetry, A Change of World, was published the same year. It had been selected by W.H. Auden for the Yale Series of Younger Poets Award.

Two years later, in 1953, Rich married Alfred Conrad, who was a Harvard economist. The couple moved to Cambridge, Massachusetts and Rich gave birth to three sons over the next five years. In amongst all her roles in her household, Rich still managed to work and published her second collection, The Diamond Cutters, in 1955.

The 1960s were a busy decade for the writer as she won numerous awards including a second Guggenheim Fellowship. Her third collection was released in 1963, titled, Snapshots of a Daughter-in-Law. It was in 1966 that Rich first became involved with the civil rights movement and began moving within anti-war and feminist activist groups. The same year she published, Necessities of Life. It was followed by another volume, Leaflets, in 1969.

The late sixties saw the poet lecturing at Swarthmore College and teaching at City College of New York and Columbia University School of the Arts, where she was an adjunct professor in the Writing Division of the school. Although her career was going well and she, continued to receive commendations for her work, her marriage was not. Rich and her husband separated in 1970 and Conrad would go on to kill himself only a short time later.

In the 1970s, Rich won the Shelley Memorial Award from the Poetry Society of America and spent time teaching at Brandeis University. Notably, Rich shared alongside Allen Ginsberg, the 1974 National Book Award for Poetry. Rich did not wish to accept the award only for herself, and instead invited Alice Walker and Audre Lorde to accept it with her on the behalf of all women.

In 1976, Rich entered into a partnership with writer Michelle Cliff, a relationship that would last until Rich’s death in 2012. The following year she published the collection, Twenty-One Love Poems, which spoke directly about lesbian sexuality and love. This period is seen as one of great change in Rich’s writing as she embraced a part of herself that had thus far been ignored.

It was also during this time period that Rich wrote some of her best-known essays, such as, “Compulsory Heterosexuality and Lesbian Existence.” She was one of the first writers to address the themes of women’s love and easily became a leader in the movement of sexual equality.

In the 1980s, Rich and her partner, Michelle Cliff, moved to Santa Cruz where Rich taught at a number of different universities and published the volumes, Your Native Land, Your Life, Blood, Bread, and Poetry, and Time’s Power: Poems. In 1984, she was invited to speak to the International Conference of Women, Feminist Identity, and Society in the Netherlands. Her speech is still read today as a major landmark in the discussion of locational politics and its relationship to feminism.

Throughout the 1990s, Rich received numerous awards and published more collections of her work. In 1991, she won the Los Angeles Times Book Award and published An Atlas of the Difficult World. She also began working with the Boston Woman’s Fund and other like-minded organizations that sought to improve the lives of women all over the world. In 1997, in protest against the vote to end the National Endowment for the Arts, Rich declined the National Medal of Arts.

Adrienne Rich was notably influenced by writers such as John Keats, Dante Gabriel Rossetti, Alfred Lord Tennyson, and many more.

Explore poetry by Adrienne Rich below, analyzed by the team at Poem Analysis. 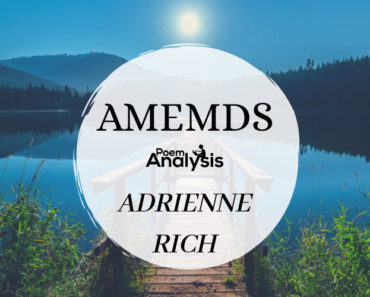 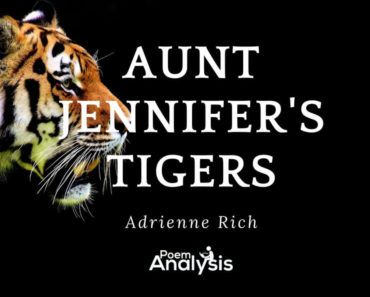 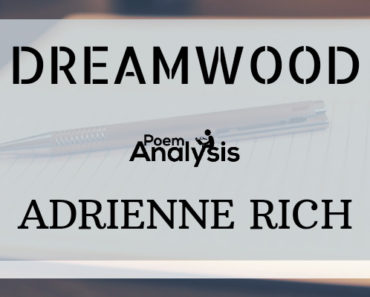 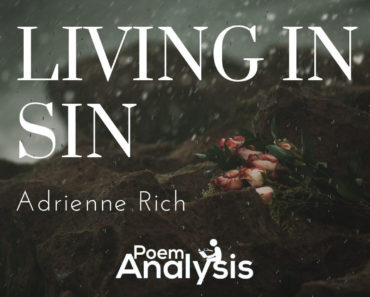