‘Aunt Jennifer’s Tigers’ by Adrienne Rich is a memorable poem. The speaker critiques marriage and how it has systematically oppressed women for centuries.

‘Aunt Jennifer’s Tigers’ was written in 1951 and included in her first book of poetry, A Change in the World. She explores themes that include gender, power, or lack thereof, and marriage. These are all seen through the time and dedication that Jennifer gives to her needlepoint.

Through the short lines of the poem, the speaker embodies the struggle this woman is going through and juxtaposes it against the tigers that she’s creating. Their power is contrasted against her own lack of power. 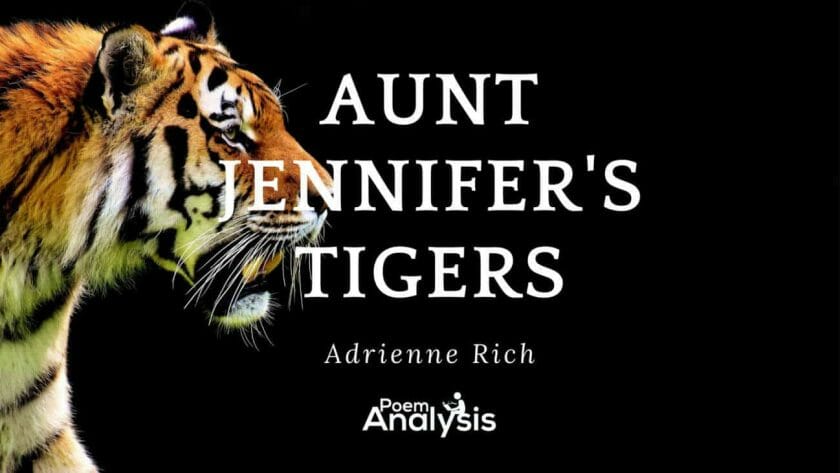 ‘Aunt Jennifer’s Tigers’ by Adrienne Rich is a multilayered poem that uses the images of sewn tigers to talk about the institution of marriage.

In the first lines of this poem the speaker, who is unnamed, describes Aunt Jennifer’s work. She’s creating a needlepoint image of tigers. They’re beautiful, described as brightly shining gemstones living in green canvas. There is also the addition of men in the image. They’re watching the tigers who move without fear. The speaker spends time describing how fast Jennifer’s fingers move and the weight of the wedding ring on her finger. The speaker looks to the future at the end of the poem. One day Jennifer is going to die and her frightened hands will stop moving. But, the tigers will not.

‘Aunt Jennifer’s Tigers’ by Adrienne Rich is a three-stanza poem that is separated into stanzas of four lines, known as quatrains. These quatrains follow a simple rhyme scheme of AABB, with the couplets changing end sounds from stanza to stanza. While there is evidence of metrical patterns in ‘Aunt Jennifer’s Tigers,’ it is not completely consistent. There are sections of the poem in which Rich uses nearly perfect iambic pentameter and moments where she moves away from it and uses trochees instead.

Rich makes use of several literary devices in ‘Aunt Jennifer’s Tigers’. These include but are not limited to anaphora, alliteration, and imagery. The latter is quite important in this poem. It can be seen through the description of the tigers, their landscape, and Aunt Jennifer’s hands.

Anaphora is a simple and useful technique. There is a good example in the first stanza with the repetition of “They” at the start lines three and four. Alliteration is also useful, it helps to create a feeling of rhythm and rhyme even if one does not exist. For example, “finger fluttering” in stanza two and “prancing, proud” in stanza three.

They do not fear the men beneath the tree;

They pace in sleek chivalric certainty.

In the first stanza of ‘Aunt Jennifer’s Tigers,’ the speaker begins by describing the movement of the tigers across the fabric canvas. They are prancing “across a screen” in a “world of green”. The perfect rhymes give this poem a sing-song-like sound that is juxtaposed against the darker subject matter. It creates a haunting atmosphere that allows for easy contemplation of the problems of marriage. The speaker describes very clearly how the tigers do not “fear the men beneath the tree”. They move without fear or trepidation. It should be noted that this is a state that the artist, Aunt Jennifer, does not know. She is not without fear as they are.

The animals are personified. Rich uses words like “chivalric” (an older term that connects to a certain, respectful yet patronizing treatment of women) to describe them. They are masculine, without worry, and “certain” in their actions. This makes it seem even less likely that Jennifer will find this same strength.

Find even the ivory needle hard to pull.

The speaker describes in the next stanza how quickly Jennifer’s fingers move. They “flutter” through the movements but are without real strength. The word “flutter” evokes the image of birds’ wings and gentle movements. Her hands find the “needle hard to pull”. There is something weighing them down, a “wedding band”. The ring that ties her to her husband keeps her from moving beyond who she is at that moment. It “Sits heavily” on her hand, her mind, and her soul.

When Aunt is dead, her terrified hands will lie

Will go on prancing, proud and unafraid.

The third stanza begins with a striking move into the future. The speaker looks towards the time in which Jennifer is going to die. These lines are enjambed, encouraging a reader to move smoothly and quickly through the stanza. She will stop eventually as will the movement of her hands. But, the ring will still be there. Even in death she will in some ways be tied to her “ordeals”.

As she struggles, suffers, and dies, the tigers will continue to prance proudly on her page. They, unlike her, are “unafraid”.