I Have a Rendezvous with Death by Alan Seeger

Seeger wrote ‘I Have a Rendezvous with Death’ as a young man while he as serving in the First World War. He was a soldier in the French military. The poem was not published until 1917, after his death. A reader will likely feel inclined to assume that the experiences of the soldier in the poem are those of Seeger himself. This is interesting to contemplate, although there is no one to know for sure this is the case. The soldier in question spends the poem contemplating the “rendezvous” he has with death. He sees it as being unavoidable. He’s going to die soon and there’s nothing he can do about it. This doesn’t mean that he wants to die though, quite the opposite. He’d rather live.

Historically, it is also important to note that the poet died soon after writing this poem in the Battle of the Somme. 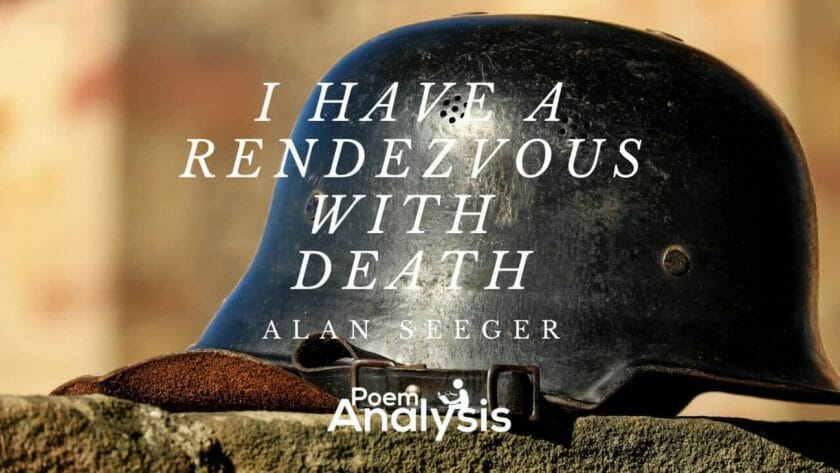 Explore I Have a Rendezvous with Death

‘I Have a Rendezvous with Death’ by Alan Seeger is a moving, wartime poem that describes the speaker’s coming, unavoidable death.

The three stanzas of the poem do different things. The first sets out the premise, describing the speaker’s coming meeting with death. The second describes the speaker’s interest and curiosity about what death is going to be like. In the final stanza, the speaker declares that it will be spring when he dies and he’ll meet death as it is his duty to do so.

‘I Have a Rendezvous with Death’ by Alan Seeger is a three-stanza poem that is separated into one stanza of six lines, one of eight and a final stanza of ten lines. The poem is written in what is known as iambic tetrameter. This means that each line contains four sets of two beats or syllables. The first of these is unstressed and the second is stressed. While the meter remains mostly consistent throughout the poem, the rhyme scheme is not. There are some end rhymes, such as “air” and “fair” in stanza one, but not all the lines rhyme.

Seeger makes use of several literary devices in ‘I Have a Rendezvous with Death’. These include but are not limited to alliteration, enjambment, and personification. The latter is seen right away as the speaker refers to death as a being that he’s able to meet. The force will take him by the hand and lead him into the dark lands of the afterlife.

Alliteration is an important technique that is used to increase the rhythm and rhyme of a poem. For example, “brings back blue” in stanza one and “better” and “be” in the first line of stanza three.

Enjambment can be seen in the transition between lines. For example, that occurs between lines one and two of the first stanza and lines two and three of the second stanza.

At some disputed barricade,

When Spring comes back with rustling shade

And apple-blossoms fill the air—

When Spring brings back blue days and fair.

In the first stanza of ‘I Have a Rendezvous with Death,’ the speaker makes use of the line that came to be used as the title. He capitalizes “Death” a common way of personifying the force and giving it more power and influence. It feels like a read being that the speaker, or perhaps the poet himself, is going to meet. He doesn’t know exactly when he’s going to die, but it is going to be soon. The speaker expects he’ll meet his fate sometime in the when “Spring comes back” with its side and the scent of “apple-blossoms fill the air”. This is lovely imagery. It is juxtaposed against the main subject of the poem, death itself.

In the last line of the first stanza, there is a great example of alliteration. Seeger uses the phrase “brings back blue” to describe the days that will return when its time for him to meet his death. He is not as much referring to a “blue” or solemn mood as he is to the color of the sky. It is “fair”.

It may be he shall take my hand

And lead me into his dark land

And close my eyes and quench my breath—

It may be I shall pass him still.

On some scarred slope of battered hill,

When Spring comes round again this year

And the first meadow-flowers appear.

The speaker expresses two different ways that things might go for him. First, death might come and “take” his hand. As a personified figure, death would lead him into the “dark land” of the afterlife. This is what’s at the forefront of his mind. But, he thinks there’s another possibility too. There’s a chance that he might pass death by, at least for now. He has a “rendezvous” but maybe not right away.

The last lines of this stanza are quite lyrical. With the perfect rhymes and the repetition of the refrain “I have a rendezvous with Death,” they take on a lyrical quality. This is only increased by the use of alliteration with “scared slope” and “first” and “flowers” in these lines.

Pillowed in silk and scented down,

Where Love throbs out in blissful sleep,

Pulse nigh to pulse, and breath to breath,

Where hushed awakenings are dear …

But I’ve a rendezvous with Death

At midnight in some flaming town,

And I to my pledged word am true,

I shall not fail that rendezvous.

Stanza three is the longest of the three stanzas of ‘I Have a Rendezvous with Death’. The lines begin with the speaker saying that he’d rather find himself “deep / Pillowed in silk and scented down” than waiting for the hand of death to take him away. This proves that death is not something that he’s seeking out. It is going to happen soon, but he’d rather it didn’t. He turns his mind to thinking about sleeping next to someone he loves, a fantasy that is far preferable to his reality. Their heartbeats would come together, “breath to breath” they would breathe all night.

These happy and warm images disappear and the speaker goes back to talking about what he feels is his duty. The meeting with death will happen, this time, at midnight in a “burning town” (an image likely related to those of war and destruction Seeger saw in France). It will be spring, and he will not fail to meet death at the appointed time. He makes it sound as though this is his duty. He will do his duty until its his time to die.

Home » Alan Seeger » I Have a Rendezvous with Death

Baldwin, Emma. "I Have a Rendezvous with Death by Alan Seeger". Poem Analysis, https://poemanalysis.com/alan-seeger/i-have-a-rendezvous-with-death/. Accessed 13 November 2022.