Tennyson wrote ‘Break, Break, Break’ in 1835 and published in 1842. It is often considered to be an elegiac lament for his deceased friend, Arther Hallam (for whom ‘In Memoriam A.H.H.’ was written).  In ‘Break, Break, Break’, Tennyson delves into themes of death, the power of nature, and change. 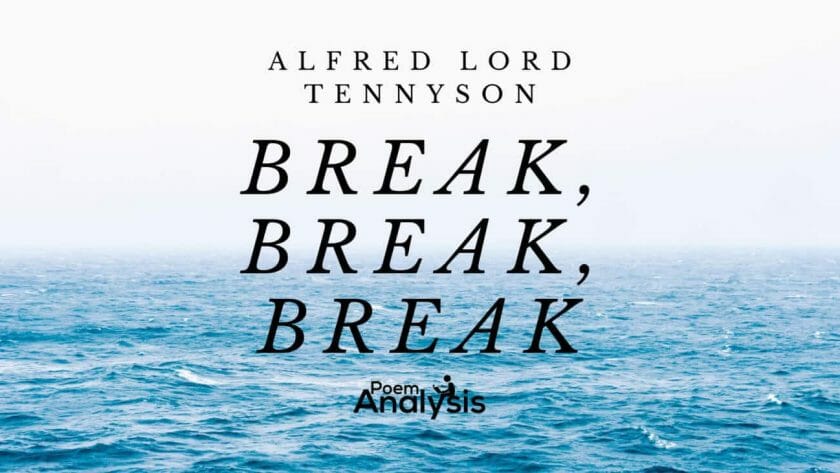 ‘Break, Break, Break’ by Alfred Lord Tennyson is a short poem that depicts personal, unnameable sorrow against the backdrop of a powerful ocean scene.

In the first lines of the poem the speaker addresses the waves, a technique known as anaphora, he tells them to continue crashing against the shore while also meditating on his deeper thoughts. He wishes that he could express how he’s feeling. While he looks over the water he sees a fisherman’s son yelling and a young sailor singing—life is going on all around him.

The speaker also notices some larger boats sailing and considers, imaginatively, that they are headed to a better world. Unfortunately, all of these sights can’t distract him from the pain he’s feeling. The poem concludes with a repetition of the first lines and an expression that he’s never going to feel past happiness again.

‘Break, Break, Break’ by Alfred Lord Tennyson is a four stanza poem that is separated into sets of four lines, known as quatrains. These quatrains do not follow a strict rhyme scheme but there are some good examples of perfect rhymes, such as “Sea” and “me” in stanza one. In regards to the meter, there are various patterns that change throughout the poem. There are many instances of trimeter, although the stresses change locations, there are other lines with more or fewer syllables.

Tennyson makes use of several literary devices in ‘Break, Break, Break’. These include but are not limited to repetition, juxtaposition, and enjambment. The first of these, repetition, is clearly sen through the use of the refrain “Break, break, break” in line one of the first stanza and fourth stanza. It helps create a strong rhythm to the lines, one that mimics the movement of the waves.

Juxtaposition is seen through the contrast of different experiences. For example, the speaker is in a deep and un-abating depression which is quite different from the sailing who is singing “on the bay” or the ships that he images are going to a better land.

Enjambment is a commonly used technique that can be seen in this poem in the transition between lines three and four of the first stanza as well as lines one and two of the third stanza.

And I would that my tongue could utter

The thoughts that arise in me.

In the first stanza of ‘Break, Break, Break’ the speaker begins by talking directly to the waves. This is a technique known as anaphora. He speaks to them although they are unable to respond. The speaker directs them to continue breaking powerfully against the “cold gray stones” of the shore. They hold a gloomy power that speaks to his emotional state at that time. He wishes, in lines three and four, that he could get his tongue to “utter / The thoughts” that are haunting him. He has thus far been unable to express his emotional state. It is too complex, or perhaps too dark, for him to find the words.

O, well for the fisherman’s boy,

That he shouts with his sister at play!

O, well for the sailor lad,

That he sings in his boat on the bay!

In the second stanza, there is a good example of anaphora with the repetition of “O, well for the” at the start of linesmen and three. This phrase introduces the two different experiences that he sees around him. The “fisherman’s boy,” his “sister” and the “sailor lad” are all experiencing the sea differently than he is. These are good examples of juxtaposition, especially the young man who is singing “on the bay”. He’s finding joy in his life and the ability to express his emotions.

And the stately ships go on

To their haven under the hill;

But O for the touch of a vanish’d hand,

And the sound of a voice that is still!

In the third stanza of ‘Break, Break, Break,’ the speaker takes note of “stately ships” that are sailing off into the distance. They too are living differently than he is. He hopes that they are going to a new land, somewhere sorrow can’t touch. But, the lovely sight of the ships doesn’t keep the speaker’s mind occupied for long. He is quickly brought back to the experiencing of touching a “vanish’d hand”. Tennyson might have been thinking of the hand of Arthur Hallam, his deceased friend. The voice that is now lost also comes to his mind. It appears that no matter what the speaker does, he can’t escape the memories of the person he lost.

At the foot of thy crags, O Sea!

But the tender grace of a day that is dead

Will never come back to me.

The fourths stanza begins with the repetition of the line “Break, break, break” which began the poem. He tells the waves again to break against the shore at the “foot of thy crags”. Tennyson used an exclamation point at the end of line two in order to emphasize his, or his speaker’s, passion.

Despite the power of the waves, the damage they do, or the sights that he sees around him, he can’t get back to the “grace of a day” that happened before his close friend died. Things are different now and that time “Will never come back to [him]”.