Amanda Gorman recently came into the public spotlight as the youngest inaugural poet in U.S. history, reading her poem ‘The Hill We Climb’ at President Joe Biden’s inauguration in January of 2021.

Amanda Gorman is an American poet who was born in 1998 in Los Angeles, California. She was raised by a single mother, Dr. Joan Wicks, a middle school English teacher, along with her two siblings, one of whom is her twin, Gabrielle. Gorman was later inspired by her childhood and her mother’s dedication to her and her siblings when writing.

When speaking about her own childhood, Gorman describes herself as a “weird child” who grew up with very little access to television. She was encouraged by her mother to spend her time reading and writing. Gorman also describes a speech impediment she had as a child, an auditory processing disorder, and her hypersensitivity to sound. She engaged in speech therapy as a child but does not feel like it has impeded her in life. In fact, she reportedly sees it as a “gift and a strength.” 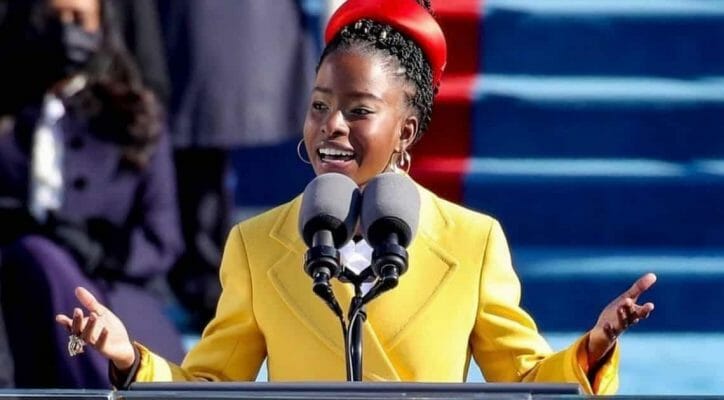 Gorman’s poetry focuses on issues of feminism, race, marginalization, oppression, and the African diaspora. She was chosen as the youth poet laureate of Los Angeles in 2014 and published her first book of poetry The One for Whom Food Is Not Enough, in 2015. A year later she founded One Pen One Page, a nonprofit organization that focuses on writing and leadership, providing free creative writing programs for underserved youth. In 2017, she was the first author to be featured on XQ Institute’s Book of the Month. It was this same year that she became the first youth poet to open the literary season at the Library of Congress. For that opening, she wrote ‘In This Place: An American Lyric.’ This performance also inaugurated Tracy K. Smith as Poet Laureate of the United States. The poem was put on display in 2018 near to works by Elizabeth Bishop.

While she was at Harvard College, Gorman was the first person to be named National Youth Poet Laureate of April 2017. She was one of five finalists and won a grant from a media company.

The Hill We Climb and President Joe Biden’s Inauguration

Gorman came into the public spotlight in 2021 when she read her poem, ‘The Hill We Climb’ at President Joe Biden’s inauguration. She wrote the poem for the occasion and is the youngest poet to ever read at a presidential inauguration in history. Reportedly, Joe Biden recommended her for the occasion. In part, the poem was inspired by events of less than two weeks prior, the storming of the United States Capital by supporters of then-President Trump. After completing her reading, and receiving rave reviews from the public, her two books, The Hill We Climb and Change Sings: A Children’s Anthem, made it to the top of Amazon’s bestseller list.