To the Poor by Anna Lætitia Barbauld

‘To the Poor’ is a moving and multilayered poem in which Barbauld considers the plight of the poorest members of society. She uses various literary techniques and powerful images to depict their circumstance and understand them as well as she can. While some of her suggestions to the poor, that they accept their circumstances, might seem thoughtless, (or perhaps sarcastic) in the end she asserts her belief that they have better lives waiting for them after death. 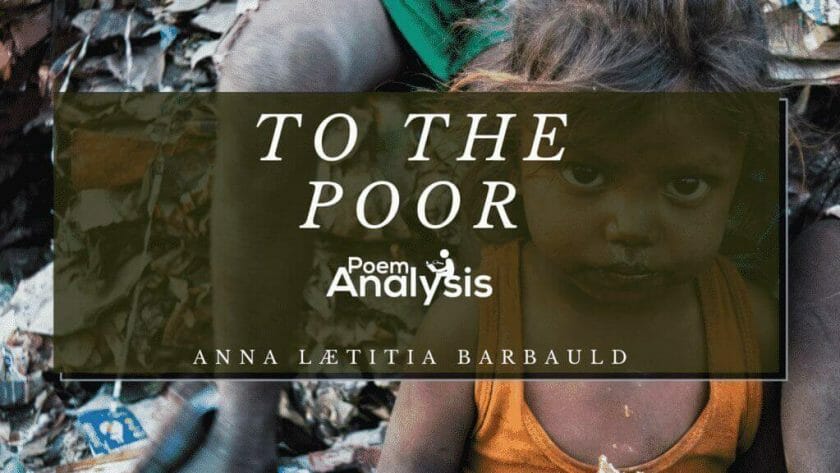 Explore To the Poor

Summary of To the Poor

‘To the Poor’ by Anna Lætitia Barbauld addresses the improvised children of the world, acknowledges their suffering, and encourages them to persevere.

In the first lines of this poem, the speaker goes through all the ways that the poor suffer. They are ignored and looked down on by the rich who through circumstances alone are made more important and privileged. She concludes the poem by suggesting that things are going to be bettering the future when the poor leave this world and enter into the afterlife with God, an infinitely fairer overlord.

Themes in To the Poor

Barbauld explores several important themes in ‘To the Poor’. These include poverty, fairness/justice, and the afterlife. The speaker addresses a generalized impoverished “child” of the world throughout the poem. She tells this person that their life is hard now, and they’re going to have to bear more hardship, but that things are going to change in the future. The afterlife is going to be different. She introduces religion at the end of the poem as the salvation that everyone has waiting for them after death. The forces that control the physical world do not have any influence on the afterlife.

Structure and Form of To the Poor

‘To the Poor’ by Anna Lætitia Barbauld is a twenty-two line poem that is contained within one stanza of text. The lines follow a simple rhyme scheme of AABBCC, and so on, changing end sounds from couplet to couplet. These rhymes are perfect/full throughout creating a very even, consistent pattern. The meter is not as regular as the rhyme scheme but the majority of the lines are close in length and syllable numbers.

Literary Devices in To the Poor

Barbauld makes use of several literary devices in ‘To the Poor’ these include but are not limited to examples of anaphora, imagery, and caesura. The first of these, anaphora, is seen through the repetition of words or phrases at the beginning of multiple lines of text. For example, “Who” and “Whose” in lines seven through ten.

Caesura is another formal device that can be seen when lines are interrupted with a pause, caused by punctuation. For example, line four reads: “Flow in full cups of joy—and not for thee”. Another good example is line eleven. It reads: “Bear, bear thy wrongs—fulfill thy destined hour”.

Imagery is one of the most important literary devices in poetry. It is seen through a poet’s ability to create images that trigger multiple senses. Readers should be able to do more than just see a described scene but also feel it, and imagine its smells, sounds, and tastes. For instance, lines nine and ten which read: “Who dragg’st the load of faint and feeble years, / Whose bread is anguish, and whose water tears”.

Analysis of To the Poor

Child of distress, who meet’st the bitter scorn

Of fellow-men to happier prospects born,

Flow in full cups of joy—and not for thee;

Who seest the rich, to heaven and fate resigned,

Bear thy afflictions with a patient mind;

In the first lines of ‘To the Poor’ the speaker begins by addressing a ‘Child of distress”. This metaphorical child is a representative of all the poor and ignored children of the world. They meet the “bitter scorn” of the happy men who were born into “happier prospects”. Through this first line Barbauld is setting up one of the main points of the poem, that poor people are ignored for their poverty by the rich who have everything they could ever ask for. It is also important to note that Barbauld states that the rich were “born” into their lives. They didn’t have to work for the wealth they have.

Unfortunately, for the child of distress, the happiest parts of the world do not flow in their lives. The “cups of joy” are not “for thee”. The speaker continues to address this poor child of the world, asking that they have “patience” with their situation and “Bear” their afflictions calmly.

Who dragg’st the load of faint and feeble years,

Whose bread is anguish, and whose water tears;

Bend thy meek neck beneath the foot of Power;

In the following lines, which exhibit a very clear example of anaphora, the speaker addresses the impoverished with different titles. They are the ones whose “bursting heart disdains unjust control” and feels “oppression’s iron in thy soul”. They are the people who drag loads, mental and emotional, through their feeble years. These people suffer day in and day out and are likely to suffer more before salvation comes.

The speaker knows that better times are coming for the poorest citizens of the world. What exactly those better times entail is described in the coming lines.

But when thou feel’st the great deliverer nigh,

And thy freed spirit mounting seeks the sky,

Think not their threats can work thy future woe,

The speaker tells the “Child of distress” in these lines that when they feel that nothing is ever going to get better to ignore that feeling as things surely are. They shouldn’t let “whispered terrors” about the next line being the same as this one, “shaky they quiet breast”. The “threats” of the rich, the lords and aristocrats that control their lives, have no meaning.

Safe in the bosom of that love repose

By whom the sun gives light, the ocean flows;

Prepare to meet a Father undismayed,

Nor fear the God whom priests and kings have made.

The speaker tells the listener/s that there is a place of safety they’ll eventually end up, heaven. There, they will be able to meet “Father undismayed” and not “fear” anything from the physical world. The true God is a fair and benevolent father, not one who would subjugate the poor further in the afterlife.

Readers who are interested in reading more interpretations of poverty, from various perspectives, won’t be at a loss for options. Poems like ‘kitchenette building’ by Gwendolyn Brooks, ‘Holy Thursday’ by William Blake, and ‘Your Riches — taught me — Poverty‘ by Emily Dickinson are all good options. The first of these is especially moving. In it, Brooks uses her own experiences to describe the practices of dividing small apartments into even smaller kitchenette apartments. These would house multiple families who lived in poverty in Chicago. Another interesting choice is ‘Poverty’ by Marinela Reka.