Anne Bethel Spencer was born in February of 1882 to African American parents, Joel and Sarah. Both of her parents worked on a plantation and Joel, who was born a 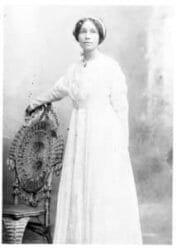 slave, was determined to find a way to make a better life for his child. Her parents had irreconcilable differences when it came to childrearing, a fact that led to their separation, and Anne’s move to live permanently with her mother in West Virginia.

Anne and her mother lived in a small town called Bramwell where her mother, Sarah, worked as a cook. Anne did not attend public school, as her mother did not believe it was good enough for her. Instead, Anne spent her childhood carefree and able to develop a natural interest in poetry. She was a deeply solitary child and spent most of her time wandering outside.

While her parents may have been separated, her father still had contact with Sarah and Anne. When he discovered that Anne was not in school he told Sarah that she must enroll Anne or he would take her to live with him. This made up Sarah’s mind and Anne was sent to school at the Virginia Seminary. She was an excellent student and graduated valedictorian.

It was at school that her interest in poetry was truly sparked. She wrote her first poem, which is now lost, while enrolled there. Her work touched on topics of race, and the realities of living as a black woman in the United States.

After graduation, Anne returned to Bramwell where she taught grade school for approximately three years. Her career as a teacher ended when she married Charles Edward Spencer, a man she had met and come to know at school. They were married in 1901 and moved to Lynchburg, Virginia in 1903. They had three children together, two girls and a boy. While working as a mother to her three children, Anne became a librarian at Paul Laurence Dunbar High School where she worked for more than 20 years.

In 1920, when she was forty years old, Anne’s first published poem, “Before the Feast at Shushan” appeared in The Crisis. The following decade saw the appearance of the majority of Spencer’s work. She would publish over 30 poems in her lifetime and would become the second African American to be included as part of the Norton Anthology.

Anne Spencer died in July of 1975 at the age of 93. She and her husband are both buried at the Forest Hills Cemetery in Lynchburg, Virginia. The majority of her work was published after her death in, Time’s Unfading Garden: Anne Spencer’s Life and Poetry. You can read Anne Spencer’s poems here.