Archibald MacLeish was born in Glencoe, Illinois, on May 7, 1892. His parents were Andrew MacLeish, a merchant, and department store founder, and Martha MacLeish, who was a college professor. 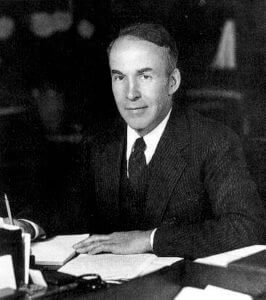 MacLeish grew up in a home along Lake Michigan and in his youth attended Hotchkiss School for four years. He went on to Yale University where he majored in English. MacLeish followed these educational experiences with the start of a degree from Harvard Law School. His studies were cut short by the start of World War I. The future poet would serve as both an ambulance driver and an artillery officer during the war. MacLeish’s brother was killed during this time period.

After the war was over MacLeish returned to Harvard Law School and then went on to teach in the government department of the university. He also worked as the editor of The New Republic. His first collection of poetry was published in 1915 and was titled, Class Poem.

In 1916, MacLeish married Ada Hitchcock and the two moved to Paris together in 1923. While there he met with a number of other writers such as Ernest Hemingway and Ezra Pound. His next book of poetry, The Happy Marriage and Other Poems, was published in 1924. It was followed by The Pot of Earth in 1925. Three years later he returned to America where he began working on his epic poem Conquistador. This involved traveling throughout Mexico.

It was also during this time period that he worked as the editor of Fortune magazine and wrote radio dramas that warned against fascism. In 1932, he won the Pulitzer Prize for poetry for Conquistador.  In 1939, the poet accepted an appointment as Librarian of Congress. He remained in that position for five years, after which he served as the director of the War Department’s Office of Facts and Figures. He was later named Assistant Secretary of State for cultural affairs.

Once the war came to an end, MacLeish retired from politics and took on the role of Harvard’s Boylston Professor of Rhetoric and Oratory, then later the position of Simpson Lecturer at Amherst College in 1963. Then in 1952, he won a second Pulitzer Prize, as well as the National Book Award, for Collected Poems, 1917-1952.

The poet also spent time working on screenplays. One of which, The Eleanor Roosevelt Story, won him an Academy Award in 1965. Archibald MacLeish died in April 1982 in Boston, Massachusetts.