A Season in Hell: Introduction by Arthur Rimbaud

Arthur Rimbaud wrote ‘A Season in Hell’ in the 1870s after splitting from fellow poet Paul Verlaine. The two had been pursuing a romantic relationship until the latter, in a rage/stupor, shot Rimbaud in the arm. He wrote this piece while living in the barn loft of his parent’s farm. The poem was self-published in 1873 but the copies weren’t distributed until ten years after his death.

This piece is a perfect example of Rimbaud’s imaginative and sometimes surrealist style. He is remembered as one of the leading members of the Decadent movement as well as French Symbolism. This analysis focuses on the first of nine sections of this long poem. 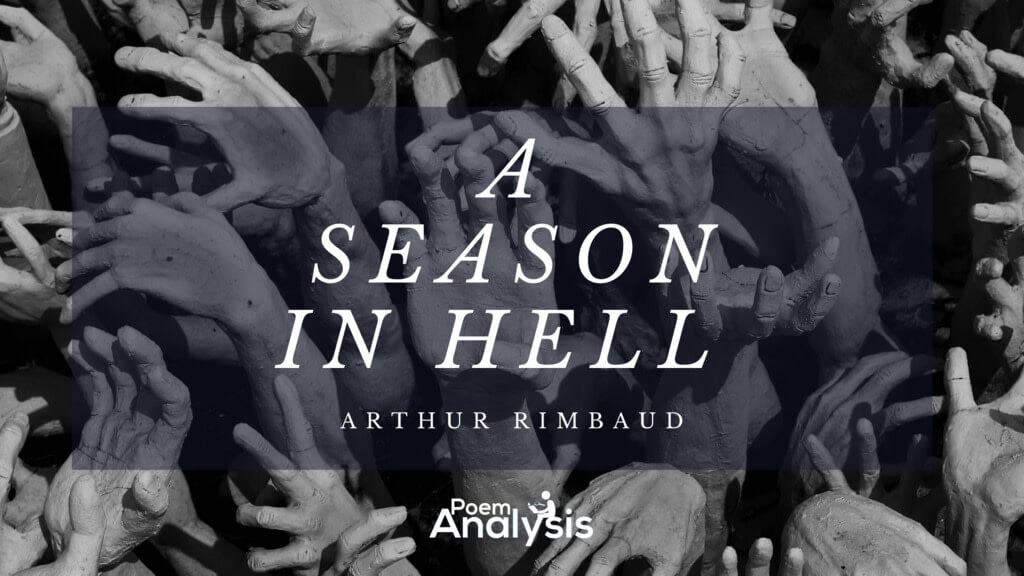 Explore A Season in Hell

‘A Season in Hell: Introduction’ by Arthur Rimbaud is the striking opening to Rimbaud’s long, complex, and infinitely memorable masterpiece.

In these lines of ‘A Season in Hell,’ the speaker introduces his dark and dreary circumstances. He’s incredibly sad and destroys any possibility, it seems, of him returning to a happy state. The speaker turns to darkness, crime, and cultivates sin within his own heart. But, at the end of this section, he starts to consider the possibility that this doesn’t need to be the case. Perhaps, he can regain his “appetite” for life.

Rimbaud engages with some of the major themes of ‘A Season in Hell’ within this first section. These include isolation, depression/darkness, and religion. This first section asserts that the speaker is “damned” for a reason that is not elucidated. He expresses his sorrow at his life but even more than that, his anger. He’s ready and willing to destroy everything in his life. The speaker is repulsed by Beauty and frustrated by all the men and women he could possibly meet. By the end, he’s conversing with the Devil.

‘A Season in Hell: Introduction’ by Arthur Rimbaud this long poem is separated out into nine, complex, and sometimes baffling sections. The first of these is the Introduction. It is followed by “Bad Blood,” “Night of Hell,” “Delirium 1” and “2” as well as “The Impossible,” “Lightning,” “Morning,” and then finally “Farewell”. The poem was written in French and has since been translated into English. This means that every translation is going to be slightly different and some of the formal choices that Rimbaud made are going to be lost.

This poem is written in free verse, something that Rimbaud is quite well known for. But, there are a few moments in ‘A Season in Hell’ in which Rimbaud uses a specific structure. Although none of them are in this particular part of the poem.

Despite the fact that this poem was originally written in French and then translated into English, there are several literary devices that are important to take note of. These include but are not limited to anaphora, metaphor, and imagery. The first of these, anaphora, is seen through the use and reuse of words at the beginning of multiple lines. For example, “I” at the start of several lines in the Introduction.

The first lines of this poem also contain an example of a metaphor This is seen through the use of the “feast” to represent a good life in which one has an “appetite” for the next day. It is undeniable that Rimbaud was a master of imagery. Almost every line of this poem has an example that could imprint itself on a reader’s mind take for example: “I made the wild beast’s silent leap to strangle every joy”.

Once, if I remember rightly, my life was a feast where all hearts opened, and all wines flowed.
One evening I sat Beauty on my knees – And I found her bitter – And I reviled her.
I armed myself against Justice.
I fled. O sorceresses, O misery, O hatred, it was to you my treasure was entrusted!
I managed to erase all human hope from my mind. I made the wild beast’s silent leap to strangle every joy.
I summoned executioners to bite their gun-butts as I died. I summoned plagues, to stifle myself with sand and blood. Misfortune was my god. I stretched out in the mud. I dried myself in the breezes of crime. And I played some fine tricks on madness.
And spring brought me the dreadful laugh of the idiot.

In the first lines of the introduction to ‘A Season in Hell,’ the speaker explains that there was one point in his life when he was truly happy. He uses the metaphor of a “feast” in which “all hearts opened” to describe how he felt. In the next line, the poet uses personification to describe “Beauty” sitting on his lamp, but it was not so simple. He “found her bitter” and he “reviled her”. He “fled” from his life, calling out all the elements o this life that he thinks are to blame.

Rimbaud uses several examples of apostrophes in the next lines as he addresses “sorceresses,” “misery,” and “hatred”. None of these forces/things can respond, but he’s talking to them anyway. He informs whoever may be listening, that he trusted than with his “treasure”. The speaker turned over some part of himself to “Beauty” and he was in some way betrayed. There are not yet enough details to clearly explain what happened to this person.

The poet uses anaphora, beginning several lines with the pronoun “I”. He explains how he disappeared from his life and banished “human hope from” his mind. Metaphorically, he describes himself as an animal who is tearing up everything he used to value. All joy in his life is destroyed.

He goes on, bringing in line after line that shows how truly miserable and transformed he is. The speaker hates the world and himself so much that he summons “plagues” and stifles himself “with sand and blood”. He’s encouraging his own suffering and that of others. “Misfortune,” something that most people try to avoid at all costs, is this speaker’s “god”.

It’s very clear that this narrator is in a very bad way, depression, sorrow, and hatred are all on his mind. He alludes to the fact that he may have committed crimes in order to give himself something to as well as further the darkness that he’s manifesting around himself.

In the last line, he describes spring and how it brought to him “the dreadful laugh of the idiot”. He seems to be going mad, losing touch with the things that could be positive in his life, and laughing at the coming of spring. It’s likely that with its transformations he realizes, more than anyone else, that the seasons change nothing. He’s still miserable.

Now, just lately, finding myself on the point of uttering the last croak, I thought of seeking the key to the old feast, where I might perhaps find my appetite again!
Charity is the key – This inspiration proves I have been dreaming!
‘You’re a hyena still…’ the demon cries who crowned me with such delightful poppies. ‘Win death with all your appetites; your egoism, all the deadly sins.’
Ah, I’ve practised too many! – But, dear Satan, I beg you, an eye a little less inflamed! And while awaiting my few cowardly little deeds, for you who prize in a writer the lack of descriptive or instructive skill, for you, I tear off these few hideous pages from my notebook of a damned soul.

The next lines ‘A Season in Hell’ continues in the same way as the previous. The poet uses onomatopoeia to allude to frogs and his last “croak,” meaning, he’s near death. His sadness is the cause. The image of the “feast” comes backing the poem in the next lines. He remembers its happiness and hopes that maybe he’ll be able to “find” his appetite again. The metaphor of the feast is continued here, with “appetite” standing in for a desire to live.

As he considers making a change in his life, he realizes that “Charity is the key”. It is with kindness to others that he’s going to be able to return to his previous state. He’ll get to be part of the feast of life again.

Unfortunately for this speaker, the devil, a demon inside him, is trying to keep him from going back to his good life. The “demon” tells him that he’s still a “hyena” and that he should stay how he is and continue to sin. The speaker tells “Satan” that he’ll have to wait a little longer for him to descend to Hell and in the meantime, he’s going to “tear off these few hideous pages from [his] notebook of a damned soul”. The speaker knows he’s going to Hell, but he has a few more things he wants to do first.

Other masterful depictions of sorrow, religion, and Hell, and even damnation, can be found in Dante’s ‘Divine Comedy’ as well as Milton’s ‘Paradise Lost’. Rimbaud’s ‘Season in Hell’ is not as long as these other “epic” poems are, but it is of a similar nature. Readers might also be interested in ‘Acquainted with the Night’ by Robert Frost, ‘Darkness’ by Lord Byron, and ‘The Darkling Thrush’ by Thomas Hardy.