Arthur Rimbaud was born in Charleville, France in October of 1854. He was the second child of Frédéric Rimbaud and Marie Catherine Vitalie Cuif. Rimbaud’s father was an infantry captain who spent the majority of his career abroad with the army. After marrying Marie, Frédéric spent very little time at home over their seven-year marriage. 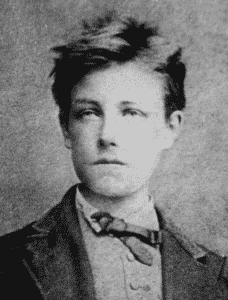 Rimbaud and his siblings were moved by their mother to the Cours d’Orléans in 1862. It was a neighborhood better able, as Marie assumed, to provide her children with more suitable friends and influences. Rimbaud and his brother were sent to the Pension Rossat where they received an initial five years of education. Their mother was demanding about the time they put into their studies and often punished them with Latin verse as well as refusing them meals.

Rimbaud did not enjoy school until he arrived at the Collège de Charleville. Here, he was first exposed to fairy tales and stories of adventure. He was a very successful student and led his class in almost every subject. When Rimbaud was around fifteen years old, his skill as a poet began to show itself with his poetry. One of his first poems, ‘Ophélie’ was written around this period. It would later be included in anthologies and considered one of his best.

By the later part of 1870, Rimbaud had begun to actively rebel against a life he saw as boring. He ran away to Paris at one point, getting arrested and locked up in Mazas Prison. Rimbaud was also spending a great deal of time drinking and stealing. His first work Les Étrennes des orphelins, was published in 1870. It was followed that same year by Comédie en trois baisers.

Later the next year, after briefly corresponding with contemporary Paul Verlaine, Rimbaud traveled to Paris. He stayed in the Verlaine home for a short period of time. The two writers carried on a short affair but intense. There was a noted amount of alcohol and drugs involved. The two traveled to London in 1872, with Verlaine willingly leaving his wife and infant. They made a living teaching and spent their days reading. The relationship soured though and Verlaine returned to his wife.

Soon after, they attempted a reconciliation that ended with Rimbaud getting shot in the left wrist. After a short period of time passed and Verlaine’s behavior became more erratic he was arrested and charged with attempted murder. The charges were reduced but Verlaine still served two years in prison.

Finally, Rimbaud returned to Charleville where he completed his prose work One Saison en Enfer or A Season in Hell. This piece is considered a prime example of Symbolist writing. In the mid-1870s Verlaine and Rimbaud met for the last time. By this point, Rimbaud has stopped writing in favor of taking on working life. It was his goal to travel as often as possible. He moved throughout Europe mostly on foot.

In 1876 he enlisted in the Dutch Colonial Army so that he could get free passage to Java. Once there, he deserted and escaped to the jungle. He eventually returned to France undercover, knowing that if he was caught he would face a firing squad. He later traveled to Cyprus where he worked as a stone quarry foreman. Rimbaud contracted typhoid while there and had to return to France.

By 1880 he had settled in Aden, Yemen where he worked for the Bardey agency. As had become his custom, he soon left his job. He started his own account as a merchant in Harar, Ethiopia where he sold coffee and firearms. After this business venture failed and with pain in his right knee, he moved back to France. He initially thought he was suffering from arthritis and failed to get treatment. The knee became so painful he finally went to see a doctor who misdiagnosed him with tubercular synovitis and informed the writer he should have his right leg amputated. The procedure was performed in Marseille in May of 1891. After the procedure, it was discovered he was actually suffering from bone cancer.

Although his health was still tenuous he traveled back to Africa in August. The pain only increased and he ended up confined to his sister’s home. There, he was administered his last rites before dying in November of 1891. He was only thirty-seven. Rimbaud’s remains were sent back to France where he was buried in Charleville-Mézières. The majority of Rimbaud’s works were published after his death. These include Les Déserts de l’amour, Proses “évangeliques,” and a great deal of his correspondence.