‘Hanging Fire’ by Audre Lorde is an incredibly relevant poem. The poet explores a young girl’s perception of her body and life.

In ‘Hanging Fire,’ Lorde uses a young girl, a fourteen-year-old, as the speaker. She takes on this persona to speak about adolescence. The girl worries about how she looks, what others think of her, her relationship with her mother, and the feelings she has for an immature boy. Throughout this poem Lorde explores themes of youth, growing up/coming of age, and death. 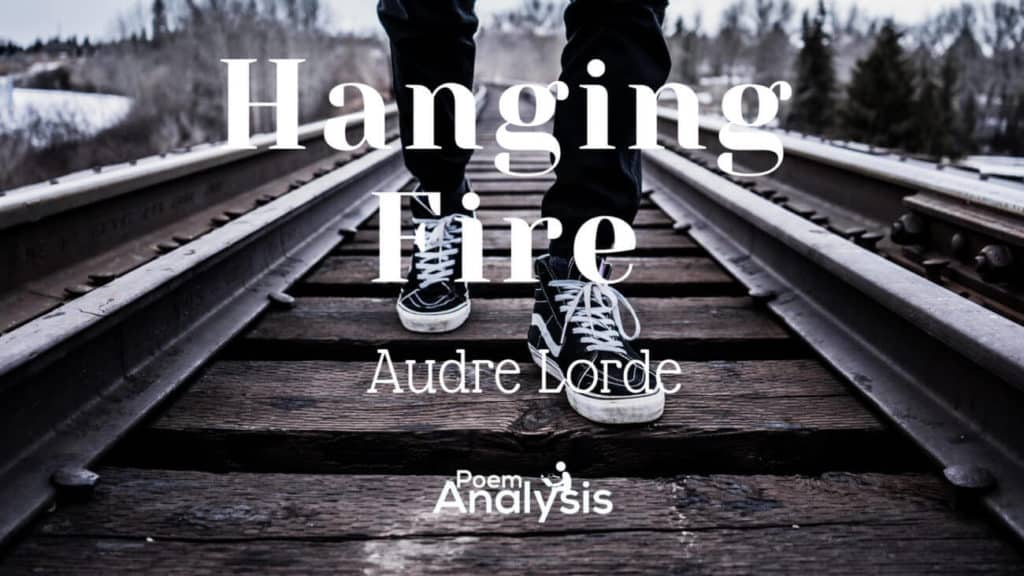 ‘Hanging Fire’ by Audre Lorde is told from the perspective of a young girl who is filled with worries, some of which are mundane and others existential.

The poem takes the reader into the mind of a fourteen-year-old girl who is beseeched by doubts and concerns. She lists out all her worries while at the same time alluding to the fact that her mother is not there for her. The girl is concerned about her ashy knees, a boy she’s infatuated with, and what to wear to school. But at the same time, she also thinks about dying before she grows up. Each stanza ends with the repetition of the phrase “and momma’s in the bedroom / with the door closed” suggesting that things would be improved for her if she could only talk to her mother.

‘Hanging Fire’ by Audre Lorde is a three-stanza poem that is separated into one set of eleven lines and two sets of twelve lines. These lines do not follow a specific rhyme scheme or metrical pattern, a technique known as free verse. The lines range in length from two syllables up to seven. Despite the lack of patterns, there are several literary devices that a careful reader can spot in Lorde’s ‘Hanging Fire’.

Lorde makes use of several literary devices in ‘Hanging Fire’. These include but are not limited to enjambment, repetition, and alliteration. The first, enjambment, is sen throughout this poem. It is emphasized through the use of a stream of consciousness narrative style in which the speaker moves from one worry to the next without pause. Almost all the lines of the poem are enjambed.

Repetition is one of the most important techniques in ‘Hanging Fire’. The speaker returns to similar themes while also making use of a refrain and the repeated references to her own death. Lastly, alliteration is a helpful device used to create a feeling of rhyme and rhythm in ‘Hanging Fire’. A good example is “still sucks” and “secret” in lines four and five of the first stanza.

and my skin has betrayed me

the boy I cannot live without

and momma’s in the bedroom

with the door closed.

The first lines of ‘Hanging Fire’ introduce the reader to the speaker, a fourteen-year-old girl. She is filled with worries, many of which she shares. The first of these is not the most important, but its the first that comes to mind. She declares that her “skin has betrayed” her. This is a very relatable and obvious reference to acne. It’s bad enough to where it feels as though her skin is actively working against her, a wonderful example of personification.

The next thing she worries about is the boy she “cannot live without” (an example of a hyperbole) but who still “sucks his thumb in secret”. This is a slightly more complicated worry. She is stressed about her feelings but also worried about the boy she loves. In addition to this, she adds that her knees are ashy, or dry, something she’s also self-conscious about.

These fairly low stakes worries are then juxtaposed against a much larger one, that she might “die / before morning”. This is a shining transition that alludes to the fact that this young girl has more trouble on her mind than it seemed at first. The stanza concludes with the refrain. It is one of her most important worries that are connected to all the other problems she has, that her mother is in the “bedroom / with the door closed”. Perhaps, a reader might conclude, many of these worries would be resolved if she was able to connect with her mother.

I have to learn how to dance

in time for the next party

my room is too small for me

suppose I die before graduation

The second stanza is structured similarly to the first although there is one more line, taking the total to twelve lines in this stanza. It is filled with more worries. These come one after another in a stream of consciousness style. Whenever one pops into her mind she mentions it. Her “room is too small” and she has a party coming up. What if, she suggests, she dies “before graduation”.

Her worries are becoming more complex as she considers her own death and the path she’s on in life. She feels like there’s so much that has to be done but nothing she wants to do. This is all made harder to deal with by the fact that she has no one to talk to about it.

I have nothing to wear tomorrow

will I live long enough

and momma’s in the bedroom

with the door closed.

In the third and final stanza of ‘Hanging Fire,’ the young speaker begins by saying that no one ver “stoeps to think / about my side of it”. This simple phrase carries a lot of weight. She feels as though the world looks past her or through her. No one, whether asking her is a real possibility or not, thinks to do so. She is not in control of her life and doesn’t want to be with one with “nothing to wear” and with “braces”.

The poem concludes with the repetition of the remaining for the last time and another example of this young person worrying about death. She doesn’t know if she’s going to live long enough to “grow up” and leave all these things (braces, ashy knees) behind her. She doesn’t want where she is now to be as far as she goes in life. But, she also doesn’t know what’s next or how to get there. That’s where her mother should come in but doesn’t.