Ben Jonson was born in June of 1572 in London, England. His father, who worked as a minister, died before his birth and his mother remarried. As a young boy, he was educated at Westminster School by the scholar and historian William Camden. Jonson’s stepfather, who was trained as a bricklayer, employed Jonson alongside him. This arrangement did not suit the writer and he ended up joining the army and serving England in Flanders. 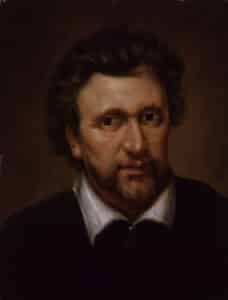 After Jonson finished his time in the Netherlands he returned to England and worked as an actor and playwright. He joined the company belonging to Philip Henslowe and in 1597 he was imprisoned in Fleet prison for sedition. Jonson had been involved in a satire entitled, The Isle of Dogs. Over the following years, he killed a fellow actor and was tried at the Old Bailey for murder. He was able to escape execution by turning himself over to the church. He briefly converted to Roman Catholicism during this time period and lost all of his possessions.

Jonson is best-known today as a playwright and it was in 1598 that one of his most popular plays, Every Man in His Humour, was performed by the Lord Chamberlain’s Men at the Globe. William Shakespeare himself was a member of the cast. This was his first great success and was followed by Every Man Out of His Humour, which was not nearly as popular. The next years of his life were filled with controversy as he spoke out against fellow poets and boasted about his own abilities.

Jonson was soon to fall in with the authorities once more over his classical tragedy, Sejanus, His Fall, in 1603. The Privy Council once more charged him with treason and he was imprisoned. These incidents cast a veil of suspension over the writer in 1605 after the Gunpowder Plot. He had attended a dinner in which the conspirators were all present, but after Jonson revealed all he knew to the police and he was cleared.

Over the following years, Jonson wrote a number of different masques for King James’ court. Some of these included, The Satyr and The Masque of Blackness. Jonson’s most popular works were written and performed between 1605 and 1614. One, in particular, The Fox, is considered his masterpiece. In 1616 Jonson was given a pension from the crown. This unofficial positioning of the poet led some to consider him England’s first poet laureate.

The poet and playwright continued to work throughout the ’20s and ’30s. He died in August of 1637 and was buried in Westminster Abbey in an upright position (due to his reduced financial circumstances).

You can read about Ben Jonson’s poems here.