Billy Collins has been referred to by many as one of (if not the), most popular 21st-century poets in America. It was in 1991 with the publication of Questions about Angels that Collins star began to rise. His works are considered at once relatable and thought-provoking. He is known to use wit to speak on deeper, more profound topics. He has served two terms as the US poet laureate. Some of his books of verse include The Trouble with Poetry, Aimless Love, and the Rain in Portugal.

In recent years Billy Collins has done readings of his poetry at The White House, hosted a radio program for NPR, toured alongside singer Aimee Mann, and presented two TED talks in 2012 and 2014. He is currently on the board at ‘The Alaska Quarterly Review,’ and was recently elected into The American Academy of Arts and Letters in 2016. 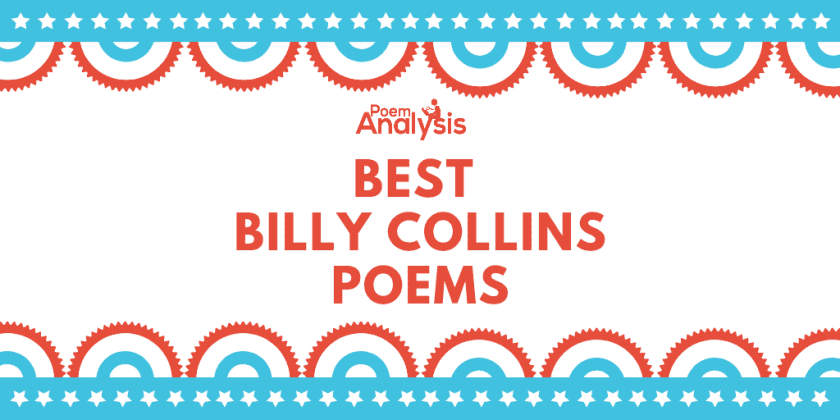 This piece was first published in Poetry magazine and then later included in Billy Collins’ collection Questions about Angels, in 1991. As the title suggests, this piece is about the afterlife. Specifically, everyone’s individual conceptions of what the afterlife is. Using humor, Collins confronts the topic of death by lightheartedly describing the various ways religions depict death. Such as “squeezing into the bodies of animals” and being inspected by a female god in her “forties with short wiry hair”.

‘Aristotle’ is separated into three distinct sections. Billy Collins chose to use this form to reference the philosopher Aristotle and his contributions to the poetic structure. Each section is filled with imagery related to either the beginning, middle, or end. For example, in the “beginning” there are “climbers studying a map” and “you” who have “not yet learned to crawl”. In the middle there are “Cities…sprouted up along the rivers” and “the thick of things”. Last, there is the end, which is filled with images like “Sylvia Plath in the kitchen” and “the empty wheelchair”.

Within this poem, the speaker discusses animal/human relationships and humanity’s perceived dominance. Specifically, the speaker discusses, with humor, the revelations he experiences when his dog comes back from the grave. The animal returns to surprise the speaker by telling him that he never liked him in the first place. By the end of the poem the speaker, who is perhaps Billy Collins himself, concludes that animals have an inherent worth that is all their own, making the act of buying and owning living creatures all the more absurd.

The Birds of America

The title of this poem comes from the title of John James Audubon’s seminal work, Birds of America. Today it is considered a masterpiece of the natural world, printed between 1827 and 1838. The references to Audubon continue in the second half of the poem as the speaker relays the imagined words of the naturalist. He notes the duck pictured in the book and relates it to how “strange” or separate, humankind is from the earth today.

As the title implies, this is a poem about poetry. The speaker, who is more than likely the poet, discusses the ways that his past and present students understand poetry. He also expresses the frustrations and joys of his everyday job and wishes that everyone could read poetry without obsessively trying to find one specific meaning behind the text. This piece is especially interesting when one considers that Billy Collins himself is a professor and therefore would have firsthand, and very up-to-date experiences, with a spectrum of students.

‘Afternoon with Irish Cows’ describes one speaker’s presumptions about the interior lives of cows and what it means to exist in the world. The poem begins with the speaker describing how he can see a cow field from his house. By watching it, he knows that the cows remain there, day in and day out. There are usually a few dozen there at all times and some of them greet him on occasion. He also takes note of the fact that they disappear every once in a while. But, then they return to sit around and wait.

This brief mystery doesn’t seem to bother the speaker too much as he turns his attention to how boring it must be to be a cow. Their patience in particular is something he can’t understand. As the poem concludes something happens that makes the speaker reconsider cows and their essence. He suddenly sees them as more than just the simple, mindless creatures he regarded them as at the beginning of the poem.

Billy Collins was born in Manhattan, New York in March of 1941. His parents, William and Katherine, raised their son in Queens and White Plains, New York.
Read Billy Collin's Biography

The Art of Drowning

‘The Art of Drowning’ is about the brief moments before death in which one person’s life is said to flash before their eyes. The speaker admits his doubts about this superstition and wonders how it all “got started”. As is common within his work, Billy Collins uses humor to address the subject, suggesting that one’s life would be better remembered through “an essay” or “a slide presentation”.

This piece begins with the speaker telling the reader that he has smoked a lot of cigarettes, but some were more special than others. The ones that were the best came as the poet was in the midst of writing. He describes the ritual of writing, smoking, and listening to music and then ends with the poignant image of the “headlamp of [his] face / pointed down at all the words in parallel lines”.

The beauty of this moment is tinged with emotion related to the first lines in which the speaker described how he stopped smoking. Although physically obviously a very good choice, it does mean that this particular experience will never be repeated.

This is another one of Billy Collins’ satirical poems that takes a look at how poetry is used. Along with that, this poem shows how it appears in the most mundane of places. In this case, he is taking a look at “the picture postcard”. It is “a poem on vacation”. The speaker examines the act of writing a postcard.  The writer puts down words on “the back of a waterfall or lake, / adding to the view a caption…” In the end, the postcard is a “compression of what we feel,” and that is poetry itself.

In the poem, ‘The Breather’ Collins uses the contemporary metaphor of horror movies. Specifically,  the famous line from When A Stranger Calls in which the main character realizes that the “call is coming from inside the house”. This revelation changes the entire nature of the movie. Then, Billy Collin uses it to describe a revelation about love. It is only “inside me,” his speaker states. Besides, he realizes, quite painfully that “All that sweetness, the love and desire— / it’s just been me dialing myself”. Therefore, the two telephones belong to him, and he is the only one on the other line.