Christina Rossetti was born in London, England in December of 1830. As a young girl  she was educated at home by her parents and learned to love reading while studying classics, novels and fairy tales. She was known to have found great inspiration from the works of John Keats, Matthew Lewis, Ann Radcliffe and others. Rossetti suffered from unstable health all her life, at the same time she was facing an important crisis of conscious which inspired experimentation with various verse forms. She maintained the span of her writing skills throughout her life and wrote many ballads, sonnets and hymns.

In 1862 Christina Rossetti‘s most famous collection was published, Goblin Market and Other Poems. Her career was firmly established at this point and she was receiving encouragement from the greatest poets of the day.  Throughout the following two decades Rossetti published a number of other volumes including, A Pageant and Other Poems, in 1880, and Called to Be Saints: The Minor Festivals Devotionally Studied, in 1881. In 1892 Rossetti was diagnosed with breast cancer. She died in December 1894. 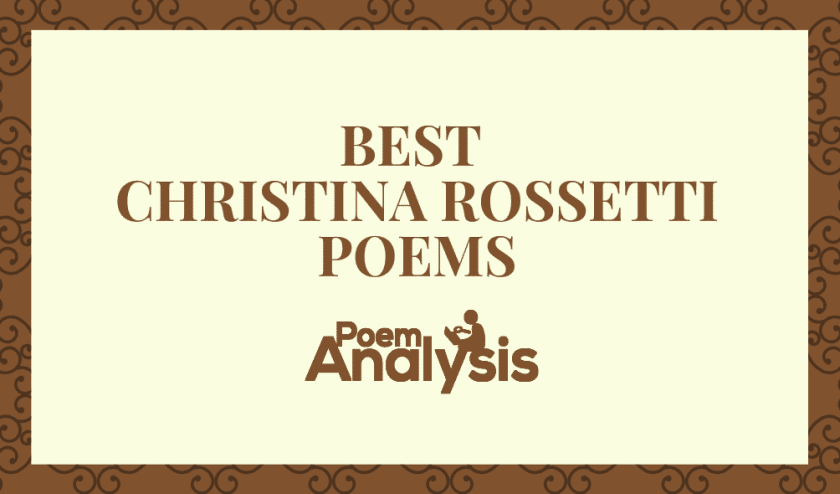 Pride is at the heart of this poem. It is one of the most important themes of this piece, and a character trait around which the events revolve. The trait can be seen in both Jessie Cameron and the neighbour’s son whom she refuses to marry. She is a brave young woman who is continually having to rebuke the advances of a young man, her neighbour’s son. He intends to marry her, but she wants nothing to do with him. The two are alone at the seaside, when tragedy strike and neither is seen again. Some of the neighbours think that he killed her, others, that they were both dragged out into the ocean.

When I am dead, my dearest

Within this piece the speaker, who is addressing her lover, tells them to “Sing no sad songs for” her. She doesn’t want him to fret over her because she is going to be dead, and won’t know the difference. Rather, he should go about his life, remembering or forgetting her. She’s fine with whatever he ends up doing in the world of the living, as she may or may not remember him once she’s dead.

In an Artist’s Studio

‘In an Artist’s Studio’ by Christina Rossetti is an Italian or Petrarchan sonnet that is separated into two parts, divided by a turn. The first part of the poem is a visual depiction of the artist’s obsession over a woman, while the second set shows how he has been consumed mentally by her image and by a happier time in his life.

In the artist’s studio there are innumerable canvases, each one has on it the painted image of a female model. It is the same woman over and over again. She is variously depicted as a queen, a peasant girl, and many others. Her face serves as sustenance for the artist’s soul and he stares endlessly at her image. Her painted portraits stare right back at him, as if she too is obsessing over him. In the end the images take on a false quality as they represent a time that no longer exists.

As froth on the face of the deep

‘As froth on the face of the deep’  is filled with a number of awe-inspiring images, especially in the first few lines. Rossetti speaks about the “froth” in the sea and then a harvest “no man shall reap.” This development, from the more ephemeral to the everyday, slowly brings the reader closer to their own life. The development also works to emphasize God’s ability to touch every part of the world. He is just as much involved with dreams as harvests. In the end, Christina Rossetti wanted to get across the fact that God is at the centre of all things and that nothing can function without his presence.

This piece is a seven stanza poem that Christina Rossetti wrote 1857 and later published in Goblin Market and Other Poems in 1862. It is a solemn poem that tells of the plight of a woman who had a relationship before marriage, effectively ending her chance at a good life. The story is relayed through an extended metaphor comparing the picking of pink flowers to the loss of one’s virginity. The main character chose to pick her flowers from the apple tree, rather than wait for the trees to bear fruit. When she realizes what has happened, she falls into a deep depression, knowing that this one choice likely ruined the rest of her life.

This beautiful poem describes a woman’s escape from the pain and physicality of the real world and her journey into a deeply mediative state of peace. The speaker is looking down on a sleeping woman at the beginning of the poem. She is deep within her own mind, and the speaker declares how important it is that she not be woken up. By going so deeply into a dream world the woman has left behind important parts of her life. It has been a sacrifice but the new world she’s in is heaven-like. By the end of the poem, the sleeping woman does find peace, away from her previous life and obligations.

Without a doubt this is Christina Rossetti’s most popular poem. The poem is packed full with intriguing images and symbols, leading to a wide variety of interpretations. It is long, reaching twenty-eight stanzas, all of different lengths. The constant rhyme scheme of the poem makes it feel light-hearted, but there are some very dark moments. The poem follows the story of two sisters, Laura and Lizzie. They former decides to follow the sounds of a goblin market, and Lizzie trails along behind.

Unfortunately, things don’t go too well. After eating some of the fruit Laura starts wasting away and is only saved after kissing the fruit juice off her sister’s cheeks. In the end, the story turns into a life lesson, relayed by the sisters, to their children.

This poem depicts the tempting, beautiful hours of daytime with an eroticism that is comparable to what faced Adam and Eve in the Garden of Eden. The speaker describes the “day” to the listener. “She” is a beautiful, soft thing that woos her. But, the night is very different. There are many “Loathsome and foul” things to be feared in the dark. Snakes glide through the scenes before her and it is not until day dawns again that she feels safe.

This poem is filled with contrasts, and when the day returns, so do“sweet flowers” and “Ripe fruits”. Day is bountiful, and night, to the speaker, is completely empty of joy and prayer. But at the end there is a turn, or change in the narrative. After thinking about the world she’s living in, she realizes that the night, in all its terror, is the real world, and day is putting on a false face, trying to tempt her.

‘A Bird Song’ describes, through the interactions of swallows, the need a speaker has for a consistent companion. The speaker of this piece begins by stating that a year has almost passed since he saw the person they love. This person recalls how happy the two were together and the way their love penetrated the world. When they were together, the sky was “bluer” and the grass was “greener”. Unfortunately, this time as passed and the present summer is only an echo of what once was.

By the end of the poem the speaker has come around to a larger metaphor, depicting the kind of love they’re really looking for. It is mimicked in the actions of mated swallows who are always together.

In the bleak midwinter

‘In the bleak midwinter’ one of Christina Rossetti’s most well known poems. It was written at the behest of the editor of Scribner’s Monthly for the January edition of the publication in 1872. The poem became one of the best loved English Christmas carols. It describes the birth of the Christ child on a “bleak midwinter” day and the worship of those who came to see him. The speaker details the setting of what a reader knows is an important day. It becomes clear that this is the day of Christ’s birth and the speaker frets over what she, a poor person, could bring to the child. In the end, the discovers that the only thing she needs to give is her own heart and its devotion.