We continue our ongoing series by looking at the best Christmas poems out there. The eagle-eyed among you might notice that there is a Christmas carol chucked in for good measure. While it is true it is now a popular carol it did begin life as a pure poem, but more on that later. 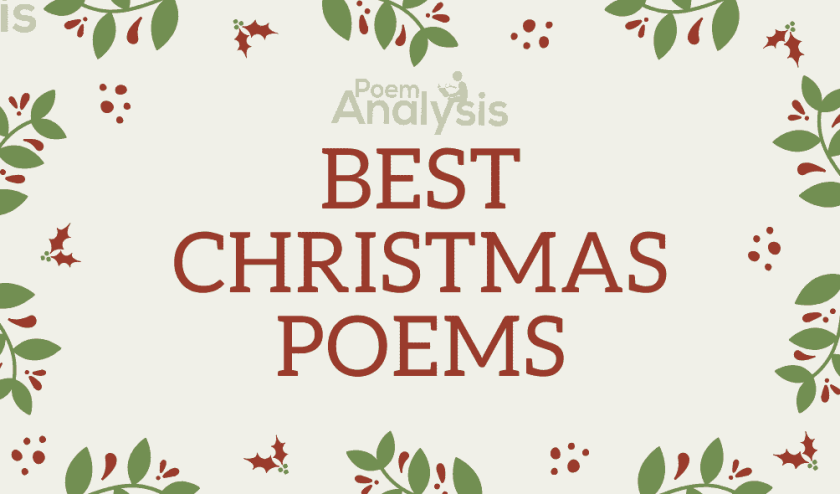 How the Grinch Stole Christmas by Dr Seuss

This is not just a heart-warming Christmas movie. It started life as a poem! A lengthy poem that formed a book. The book consists of simple and pleasing rhymes and is typical of Dr Seuss’s unique style. It tells the tale of a character called the Grinch who is miserly and detests Christmas. As a protest against the day he steals everybody’s presents. But then when everybody celebrates, even without their presents the Grinch is so touched by their togetherness that he relents and embraces Christmas. Naww.

A Visit from St. Nicholas By Clement Clarke Moore

This well-loved Christmas poem details an encounter with St Nick. It has one of poetry’s most iconic lines, the infamous “t’was the night before Christmas…” The poem itself takes advantage of rhyming couplets (many Christmas poems use rhyme liberally to help encapsulate the magic of the time of year.) The poem beautifully captures the wide-eyed excitement of Christmas Eve.

Betjeman’s classic eight stanza poem takes a slightly different slant to some of the others on the list. It makes a statement about how the true meaning of Christmas seems to be lost in the modern world. This is done by slightly disparaging many things that have become Christmas traditions. By the end of the poem, the narrator acknowledges the importance of these traditions but highlights that we never lose sight of the fact that Christmas is supposed to be a time to celebrate Jesus Christ.

The hymn started life as a collection of lyrics written by the Austrian, Reverend Joseph Mohr. He penned the words and the tune was later added by close friend Franz Gruber (No he wasn’t related to Hans Gruber, the most iconic villain from the world’s greatest Christmas movie, Die Hard – although it is an amusing coincidence.) The hymn was well received and has gone on to be translated into many languages. It is now one of the most enduring and well-beloved Christmas carols, sung worldwide by Christians.

A poetic luminary, Longfellow has a wealth of poems, including a lovely little Christmas one in his collection. If you are a fan of John Lennon and Yoko Ono’s “Happy X-mas (war is over)” then this may well be just up your street. The poem begins with a vision of hope. The refrain “Of peace on earth, good-will to men!” is used throughout and with a slightly different slant as the poem talks of how there can’t be true peace until there is no war. It is a poignant reminder that while we are all enjoying our Christmas there are some less fortunate than ourselves who probably aren’t.

Peterson is one of the most contemporary offerings on this list. She is a young, American poet whose work examines faith. This particular poem is especially lovely for reading to your children. It details the story of a young Christmas tree that is saddened. Personifying the young tree makes for a touching story. The tree is comforted and by the end of the poem the young tree has brightened up. It really is a lilting and beautiful poem, perfect for a goodnight story.

In Memoriam, [Ring out, wild bells] by Alfred Lord Tennyson

Tennyson is another poetic heavyweight who turned his prestigious talent to the holiday season. His poem is one of the bleaker on this list. However, the message is a positive one. The suggestion is that at Christmas time we should use the bells as a tool in order to help rid the world of its considerable ills. It’s a sentiment that still rings true today (excuse the pun) we don’t live in a perfect world, but at Christmas time there always seems to be an increase in people helping the poor etc. It truly is a time for hope.

From “For the Time Being” by W.H. Auden

This section from Auden’s, For the Time Being, is a wonderful representation of the feelings following the end of the Yuletide. It is an almost sarcastic reflection on the end of the Christmas, seeming to poke fun at the idea of peace and goodwill to all men by suggesting that the period is once again a failure. Auden’s control of subtle sarcasm is lightyears ahead of his time and makes for a compelling read, even to a fan of more contemporary poetry.

Love Came Down at Christmas by Christina Rossetti

The shortest poem on this list, which may seem a surprise considering Rossetti’s propensity for much longer poems, most famously her classic, Goblin Market. Nearly all the lines of this poem begin with the word love. Her simplistic refrain makes for a striking poem as she aims to cement love as the true meaning of Christmas.

On the Morning of Christ’s Nativity by John Milton

While the majority of the poems on the list pay at least some sort of homage to Jesus (Christmas is supposed to be his birthday after all!) This is the poem with the biggest nods to religion. Even the language used gives it a more ecclesiastical feel. The poem doesn’t just cover Christ’s birth but how his very presence helped eradicate paganism (somewhat ironic given the fact that many scholars credit Christianity with deliberately usurping many pagan holidays.) It also touches on the crucifixion. Milton produced this poem around Christmas time when he was just eighteen years old. Given his tender years, this poem is absolutely stunning, maintaining consistent and masterful use of rhythm, demonstrating why Milton is renowned of one of the greatest poets of all time.

Lee-James, a.k.a. LJ, has been a Poem Analysis team member ever since Novemer 2015, providing critical analysis of poems from the past and present. Nowadays, he helps manage the team and the website.
Subscribe
0 Comments
Inline Feedbacks
View all comments