10 of the Best Cowboy Poems

Cowboy poems come in many shapes and forms but all have a few unifying features. This includes storytelling, a feeling of nostalgia, and an appreciation of the natural world. 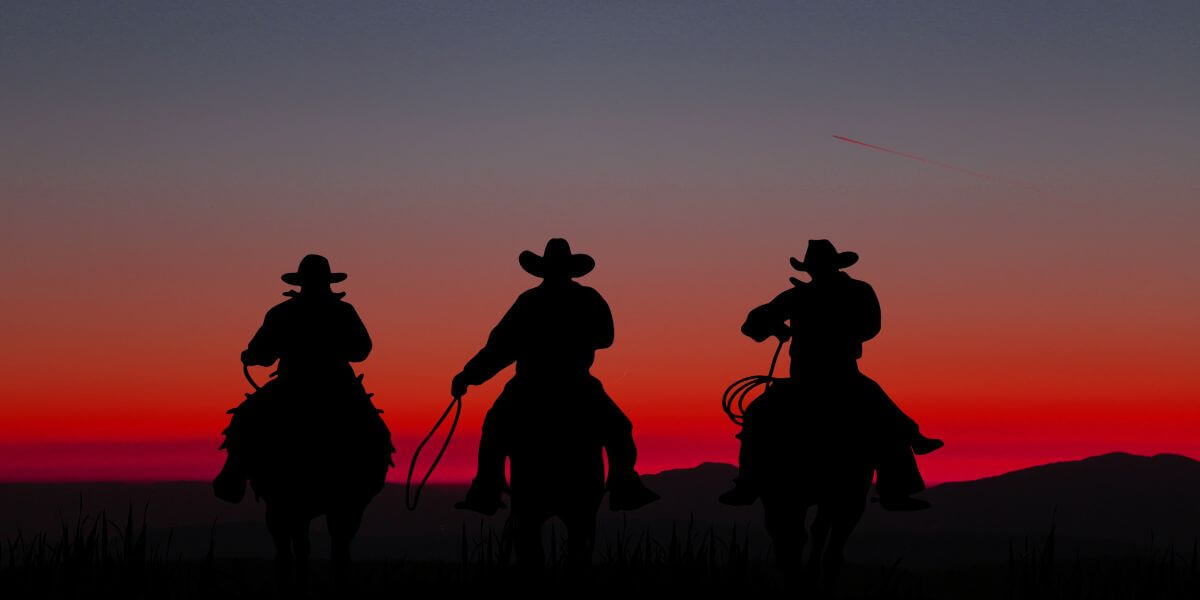 Contrary to popular belief, cowboy poems are not always written by cowboys. But the vast majority are. Those that aren’t are usually written by insiders, people who know cowboy culture well and have experienced it to some degree. The poems on this list represent some of the best cowboy poems ever written.

Tying Knots in the Devil’s Tail by Gail I. Gardner

Away up high in the Sierry Petes where the yeller Jack Pine grows tall
Ol’ Sandy Bob and Buster Jig had a rodeer camp last fall.

Oh, They’d taken their hosses and their runnin’ irons an’ maybe a dog or two
And ‘lowed they’d brand any long eared calves that come within their view

A Prairie Song by Anonymous

‘A Prairie Song’ is one of the shorter poems on this list at only six stanzas in length. The poet uses one-line stanzas and stanzas that are four lines long. It has song-like qualities that are also seen in other cowboy poems. This is created through the use of repetition, such as anaphora, and a rhyme scheme. For example, “smile” and “beguile” are in stanza one. Here are a few lines from the poem:

Out on the plains;

Where mile after mile drops behind with a smile,

And to-morrow seems always to tempt and beguile,

The Strawberry Roan by Curley Fletcher

‘The Strawberry Roan’ is a cowboy poem that’s written in four-line stanzas, known as quatrains. These quatrains use a perfect rhyme scheme and convey the classic storytelling elements about horseback riding that cowboy poems are known for. Here are a few lines:

I was laying round town just spending my time

Out of a job and not makin’ a dime

When up steps a feller and he says, “I suppose

That you’re a bronc rider by the looks of your clothes?”

‘The Old Frying Pan’ by James W. Whilt is an ode to the usefulness of a frying pan. It speaks about the many different groups of people who have used it and the wide variety of items that have been cooked with it. Here are a few lines of the poem:

You may talk of your broilers, both single and double,

Your roasters and toasters, they’re all lots of trouble;

But when out in the hills, just find if you can,

Any kind of a dish like the old frying pan.

The Camp-fire Has Gone Out by Anonymous

‘The Camp-fire Has Gone Out’ is a poem by an unknown author that mourns the loss of cowboy culture in the united state. The speaker says that because of the progression of the railroads, the cowboys have gone away, and the campfire has gone out. Here are two lines:

Through progress of the railroads our occupation’s gone;

So we will put ideas into words, our words into a song.

This unique poem conveys a speaker’s love for the natural world and how while enjoying it, he can feel God’s presence. He asks God to guide him when he turns from his path and forgive him when he does wrong. Here are four lines:

I love creation better as it stood

That day You finished it so long ago

And looked upon Your work and called it good.

The Railroad Corral by Anonymous

‘The Railroad Corral’ is another anonymous poem that conveys the storytelling form that cowboy poems are so well-known for. It tells the story of a group who is traveling across the countryside. It also includes a call to action for the audience, bringing readers into the poem and helping them imagine what it would be like to be present.

The poem begins with:

Oh, we’re up in the morning ere breaking of the day,

The chuck-wagon’s busy, the flapjacks in play;

The herd is astir o’er hillside and vale,

With the night riders rounding them into the trail.

Period: 20th century
Topic: A journey home and memories of the past

‘When They’ve Finished Shipping Cattle in the Fall’ is a fairly long poem that starts with an appeal to the reader’s emotions. The speaker talks about heading home, feeling down with the weather, making camp at night, and memories of the past. The poem conveys the very specific atmosphere of the speaker’s travels. Here are the first five lines:

Though you’re not exactly blue,

In the winter, or the long hot summer days.

For your feelin’s and the weather

Seem to sort of go together,

The Cowboy’s Life by Anonymous

In this anonymous poem, the speaker emphasizes how cowboys are soothed by the sounds of nature, like the “bawl of a steer” or the sounds of coyotes. It romanticizes the cowboy life and ends with a description of the “work” or a cowboy as “play.” Here are the first three lines:

The bawl of a steer

To a cowboy’s ear

Is music of sweetest strain;

Passing of the Range by James W. Whilt

‘Passing of the Range’ is written in the first person, something that’s uncommon among the cowboy poems on this list. The speaker looks back on his life and “When [he] was one of the cowboys” who spent all his time on “the range.” It’s another poem that mourns the end of cowboy culture or the cowboy way of life.

Here are the first lines:

Today as I gaze o’er the prairie

That stretches away into space,

I look back only a few short years

At the change that’s taken place.

What are cowboy poems about?

Cowboy poems are about all sorts of things. They can describe someone’s loneliness on a cold night, the landscape during the day, memories of the past, or hopes for the future. Meditations in the wilderness, especially in the American west, are very common.

How do you write a cowboy poem?

Cowboy poems are composed by bringing together some key elements. One of these is storytelling. Another is a clear and meaningful depiction of one’s surroundings. This includes what you hear, smell, taste, and feel.

On what did the original cowboy poets base their poetry style?

The original cowboy poets were primarily inspired by their experiences in the west on trail drives. These could last months and were usually incredibly isolated.

What form are cowboy poems?

There is no single form that cowboy poems have to be written in. They usually rhyme in order to convey a feeling of unity and promote the poem’s musical qualities, though. Some are quite short, and others are very long and nearly epic in nature.

Home » Explore the Greatest Poetry » 10 of the Best Cowboy Poems