10 of the Best Poems About Darkness

On this list readers will find some of the most thoughtful, spine-chilling, and moving poems written about darkness. Some of the featured poets were interested in mental darkness others in a more physical, storm-like darkness, and others still in how the two come together to represent emotional struggle. 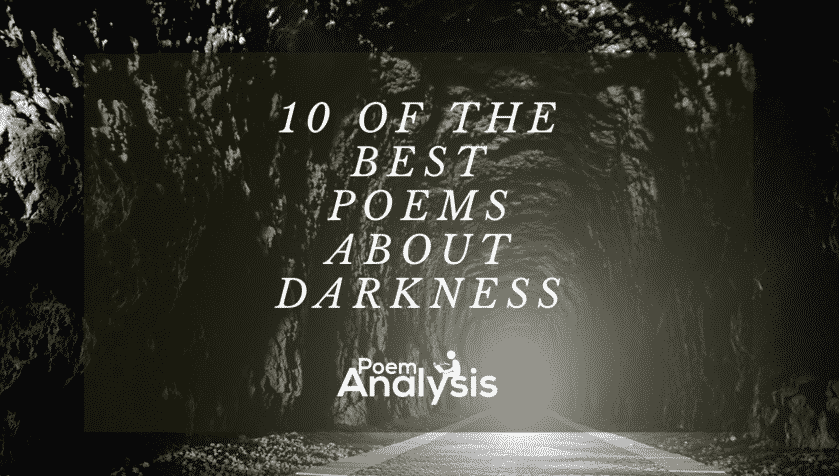 ‘Darkness’ is one of the most beautiful poems on this list. In it, Byron’s speaker warns against the growing inequality that he recognized in his time and makes predictions about what’s going to happen if nothing changes. Byron’s speaker looks into the future and what he sees is not at all pleasant. The sun, stars, and moon are all extinguished and the people of earth are left stumble around without direction. They are doomed, due to their previous actions, to live in darkness.

Written near a Port on a Dark Evening by Charlotte Smith

This poem is one of Smith’s best sonnets, and is also known by its first line “Huge vapours brood above the clifted shore”. In the poem, she depicts an oncoming storm and the darkness that spread out from it. This storm is used as a metaphor for the dark and distressing experiences one might come across in life while the light she adds into the scene is there to show a path of positivity and success through it.

We grow accustomed to the Dark by Emily Dickinson

This is not one of Dickinson’s best-known poems but it is important nonetheless. In it, readers will encounter the uncertainty of darkness, in one’s environment and in one’s mind. Some people are brave and are able to navigate through eh world, only running into trees once in a while. They eventually learn to see. Either way, darkness is something one must learn to navigate or there is no way to move through life.

The Dark by Carol Ann Duffy

This is certainly the shortest poem on this list. It is only six lines long. In it, the speaker tells the reader that there is nothing to be afraid of in the night, in the “black park” of the sky and the “bounced ball” of the moon. The poem takes a surprising turn at the end when the speaker suggests that well, actually, you might have aliens to fear.

The Dark Forest by Edward Thomas

In ‘The Dark Forest,’ Edward Thomas depicts a beautiful, although foreboding forest scene in which stars are “like seeds of light” in the sky. Although this poem is one of the shorter ones on this list, it makes an impact. The lines are jammed full of entrancing images of night and everything that dwells inside the forest.

In ‘Going’ Larkin depicts death as a presence in one’s life and its inevitable consumption of all living things. In the first parts of the poem, Larkin spends time taking note of the dark evening coming on in the distance. The “Silken” blackness of the evening envelopes the speaker. Larkin makes sure at the end of the poem to emphasize the fact that there is no way to escape death. It is only darkness at the end.

In ‘Desert Places’ Frost uses a snowstorm and the fall of the night as a metaphor for inner loneliness depression and feelings of desolation. He speaks beautifully about the snow and night sky which are growing in intensity around him. The snow is covering everything, all the life and light is being extinguished. These moments remind him of his own solitude and loneliness. Although he is in a slightly perilous situation outside in the middle of the night, he is not afraid of what could be out there. His desert places inside his own mind are far scarier.

In this free verse poem, Clarke describes a road trip as well as the border journey of life into the future. That future, unfortunately, isn’t full of light and hope. Instead, there is only suffocating darkness where the future and its surety should be. It is her intent to remind the reader that only when one accepts that they can’t see into the future, or penetrate the darkness, that they are going to be able to navigate their path.

Dark house, by which once more I stand by Alfred Tennyson

This poem is part of Tennyson’s masterpiece, ‘In Memoriam AHH,’ dedicated to a close friend who died when he was very young. This specific section is filled with descriptions of the speaker stating outside his friend’s home, meditating on the loss, and filling himself with the darkness around him. He is looking, somehow, for the old joys of friendship but they have all fled.

A World of Light by Elizabeth Jennings

In ‘A World of Light,’ Jennings flips the stereotypical associations connected to light and dark on their head. Rather than equating lightness to goodness and darkness to something evil, she reverses it. She begins the poem with her speaker stating that she is “suffering” light and is not relieved when her darkness starts to recede. Day dawdles in the second stanza, and the poet continues the negative associations with light. On the other hand, the dark hands are decided as soft and protective. In the end, she creates a landscape of contrasts and ambiguity in which one finds comfort in that which is otherwise, usually, to be avoided.