Death is something that is often thought-provoking, whilst being a powerful message that poets use in their poetry. Here are some of the best poems that incorporate the theme of death.

This list is comprised of some of the best poetic works that tackle the theme of death. Some are uplifting, like Dylan Thomas’s ‘Do not Go Gentle into that Good Night’, and others, like Egar Allan Poe’s ‘The Raven’, celebrate their own solemnity. 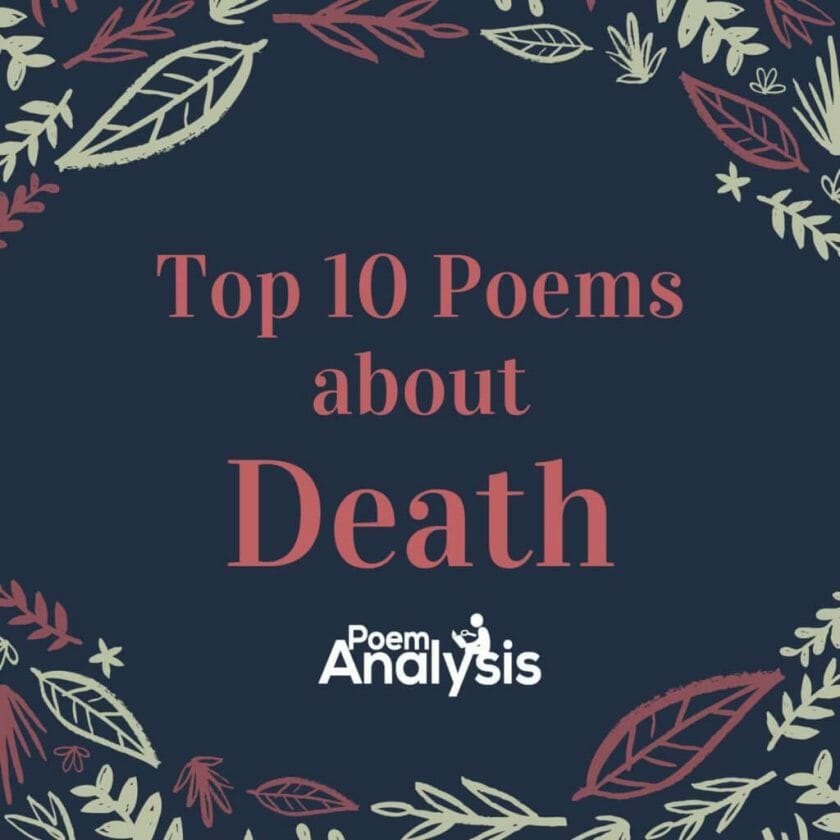 Do Not Go Gentle into that Good Night  by Dylan Thomas

Undoubtedly Thomas’ best-known work, ‘Do not Go Gentle Into That Good Night’  was first published in 1951. Thomas wrote the poem after his father’s death and used it as an opportunity to address the universality of death and encourage the reader to remain strong until the end. The poem opens with its famous lines, “Do not go gentle into that good night, / Old age should burn and rave at close of day.” Through powerful and skillfully composed language, Thomas encourages his father, and the larger population, to realize the importance of their own lives, by fighting back against the dark.

Because I could not stop for death by Emily Dickinson

Death Be Not Proud by John Donne

This poem is one of nineteen sonnets included in Holy Sonnets or Divine Meditations, published after the poet’s death in 1633. This piece is number 10. The sonnet is devoted to the personified form of death. Throughout, the speaker uses a metaphor to describe how death is impermanent and, it is not something to fear. It is actually a powerless being that frees human souls rather than destroys them. Scholars believe that Donne’s brush with death, perhaps typhoid fever, inspired this piece as well as other that meditate on similar themes.

The Raven by Edgar Allan Poe

Considered to be Poe’s best-known work, ‘The Raven’ is a fairly long, supernatural, dream-like poem that makes use of Poe’s most frequently visited themes. There is loss, death, fear and, and above all else, the haunting presence of the talking raven. The creature cries throughout the text, a single word: “Nevermore.” If you are looking for the perfect poem to set the scene for Halloween, to start off a dark night in delving into the scariest examples of writing in the English language, this is a great place to start.

On the Death of Anne Brontë by Charlotte Brontë

Anne Brontë, sister to fellow writers Emily and Charlotte Brontë, died in May of 1849 of tuberculosis. Emily died the year previously, also of tuberculosis, and Charlotte would only live for six more years, dying in March of 1855 of pneumonia. In this moving poem Charlotte Brontë describes her grief over her beloved sister’s death as well as her relief that Anne’s suffering has ended. The poem goes through the stages of death and grief, depicting Anne’s final days as ones filled with pain. At the end, Charlotte turns to God and rather than curse him, thanks him for bringing her sister peace.

This piece is perhaps Whitman’s most popular and well analyzed. It is an elegy devoted to a deceased “Captain.” He was a great leader, and someone the speaker knows the world will miss. At the beginning of the poem, the captain-less ship sails home to port and are greeted by a celebrating crowd. The speaker wishes the captain were there to see and feel the excited people onshore, and wills his body to rise up from under the deck. It is well known that this piece was written soon after Abraham Lincoln’s death and that he is intended to be the dead captain.

‘First Death in Nova Scotia’ was published in Questions of Travel in 1965. It is told from the perspective of a young child who is experiencing death for the first time. Her mother brought her to see the body of her recently deceased cousin. The speaker describes the setting, as well as how the body appears. The cousin was “all white, like a doll” and “Jack Frost had started to paint him”. At the conclusion of the poem the speaker expresses concern over how the cousin, Arthur, will make it to court with the royals that hang in paintings on his walls, with his “eyes shut up so tight”.

In this poem, Shelley utilizes his knowledge of Greek mythology, and love for its stories, to mourn the death of the mystical figure Adonais. The poem was written with Shelley’s friend, and fellow poet, John Keats in mind. Keats had recently died of tuberculosis at the age of twenty-six. As a representative of Keats’ youth and beauty, Adonais also died young. His untimely death was caused by a boar. But, Shelley takes the principle and tragedy of youthful death and applies it to his friend. He attributes the cause of Keats’ death to the literary elite who did not react well to Keats’ masterpiece, ‘Endymion’.

The poem was is known as ‘Lenore’ today but it was originally titled as, ‘A Pæan’. Those who have read Poe’s most popular poems still recognize the name “Lenore” from ‘The Raven’. The death of this character, who has been related to any number of female deaths in Poe’s life, was clearly incredibly important to the poet. The speaker alternates between two speakers, one of which is Lenore’s ex-lover. They argue over her death and the reaction of the public.

‘Lady Lazarus’ is one of a few poems Plath wrote that speaks about death. The title makes this very clear as it refers to the Biblical character, Lazarus, raised from the dead by Christ. The speaker begins by comparing herself to a Holocaust victim. Then, telling the reader that she has been through a lot. She has died a number of times, but like a cat, she keeps coming back. The speaker has died so many times that it has become an art and those who watch her, spectators.