These unforgettable poems about depression are all concerned with saddening experiences. They come from a wide range of poets with unique experiences.

Some, such as Edgar Allan Poe and Elizabeth Bishop knew personal loss and grief that informed the way they constructed ‘A Dream Within A Dream’ and ‘One Art’. Others such as Sylvia Plath within ‘Mirror’, speak on losses of a different kind, those of one’s youth and dreams. 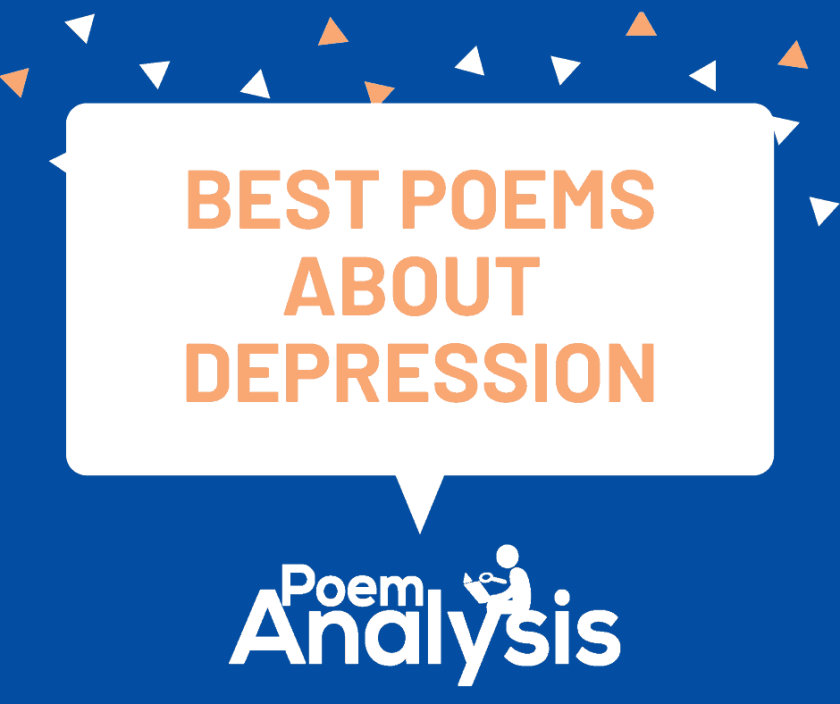 A Dream Within A Dream by Edgar Allan Poe

Lovers of poetry, and even those who only enjoy it occasionally, will immediately recognize the line, “All that we see or seem/ Is but a dream within a dream.” This rounds out the general themes of the poem. The speaker is questioning the reasons for his very existence. He knows that life is purposeless, there is no love for a reason to keep going. It has all turned into a dream state that he floats, and at the same time struggles through depression.

‘Mirror’ is a short poem written in 1961 while Plath was living in England alongside her husband, Ted Hughes (read his poetry here). The poem is told from the perspective of a mirror and is rich in imagery, as well as Plath’s trademark darkness and depression. The mirror-speaker describes itself as having “no preconceptions” and “truthful”. By the time a reader gets to the second stanza, the mirror has transformed. Now, it is a reflective lake. A female character stares at her own reflection in the lake and is depressed with what she sees. She is unable to alter her own reflection and she is brought to tears by the image of her own future rising from the lake to greet her.

Out, Out— by Robert Frost

This poem on depression was first published by Frost in July of 1916 in McClure’s. It was later included in his collection, Mountain Interval, published that same year. ‘Out, Out—‘ was inspired by the true story of a young boy, Raymon Tracy Fitzgerald, who died in an accident at a young age. He was a friend of Frost’s, and within the poem, the main character accidentally cuts off his own hand with a saw. He then succumbs to his injury after being taken to the hospital. It is generally thought that the title is an allusion to the famous line in Shakespeare’s Macbeth, “Out, out, brief candle!/ Life’s but a walking shadow, a poor player”.

An Irish Airman Foresees His Death by William Butler Yeats

This is one of Yeats’ best-loved poems and one that deals with topics close to his heart. It was written in 1918 and then published a year later in The Wild Swans at Coole. The narrator of the text describes his own death while serving as a pilot in the First World War. There are multiple narratives at play in this depression poem as it was written during a period in which Ireland was striving to gain independence from the United Kingdom. Additionally, the main character of ‘An Irish Airman Foresees His Death’ was known to Yeats. His name was Major Robert Gregory, the son of one of Yeats’ close friends, Lady Augusta Gregory. Gregory’s story comes up again in Yeats’ ‘The Municipal Gallery Revisited’.

One Art by Elizabeth Bishop

‘One Art’, one of the depression poems, is a villanelle in which the poet considers what it means to lose, and how one can master it, as an artist. Through the text, she catalogs small lost items, such as a watch, and then moves on to larger ones, such as a loved one. Scholars believe that the losses outlined in ‘One Art’ were experienced by Bishop herself. Throughout her life, she experienced deep personal grief after the death of her mother and partner.

I felt a Funeral, in my Brain by Emily Dickinson

Dickinson wrote prolifically on her own struggles with mental health and none of her poems is better known than this one in that wider discussion of her work. Within the text she uses various metaphors, concerned with life and death, to discuss endings, beginnings, and the deep, unshakable fear of losing one’s mind. The speaker depicts the slipping away of her sanity through the image of mourners wandering around in her head. They are in a cycle of sorts, unable to break out or change their pattern.

On Another’s Sorrow by William Blake

‘On Another’s Sorrow’ was published in Songs of Innocence and is one of the longer poems on this list, reaching nine stanzas. God’s enduring love is the main theme of the poem, and the conclusion of nine stanzas of build-up as the speaker moves through natural imagery. He discusses the worth of the smallest of creatures, such as the wren, and how everything and everyone suffers.

The second half of the poem is directly dedicated to God and how he interacts with the world. He can become all those who suffer and sit by those who are in the depths of despair, no matter who they are. If one cares for the world’s smallest and (seemingly) insignificant creatures, they are acting as God would.

Explore the poetry of William Blake.

So We’ll Go No More a Roving by Lord Byron

‘So we’ll go no more a roving’ was first recorded in a letter to Thomas Moore in 1817. This best-known depression poem was published almost 15 years later in Moore’s Letters and Journals of Lord Byron. The poem speaks of the fatigue associated with aging. As well as how the days of one’s life eat away at one’s youthful emotions and intentions. Byron’s speaker, who many assume to be the poet himself, describes how even though his “heart be still as loving” he has decided that “we’ll go no more a-roving”. His heart, he states, is no longer as strong as it was. He must “pause to breath/ And love itself have rest”.

Ode on Melancholy by John Keats

‘Ode to Melancholy’ is one of five famous odes Keats composed in 1819, the others include ‘Ode to a Grecian Urn,’ ‘Ode to a Nightingale’ and ‘Ode to Psyche’. The poem is a discussion of different kinds of people who deal with loss and resulting depression. Keats’ speaker warns against turning to vices to block out one’s pain. Instead, he encourages listeners to remember that without loss, there couldn’t be love or beauty.

Shut Out by Christina Rossetti

‘Shut Out’ was published in 1862 in Rossetti’s collection “Goblin Market and Other Poems.” At the beginning of the poem, the speaker is on one side of a gate. She’s looking into a beautiful, varied garden. She speaks with a shadowed figure guarding the gate, asking that she be let in to take some flowers. These would, she thinks, improve her mood considerably. Rather than let her in, the guard ignores her and then begins building a wall around the garden. She grieves over this new impenetrable barrier. The poem ends with the speaker gaining entry into a different, smaller—yet still beautiful, garden. But, she remains downtrodden and depressed.

Explore the poems of Christina Rossetti.