10 of the Best Poems about Dogs

From desperately sad, to joyously loving, the poems on this list will evoke a variety of emotions in those who have dogs and those who do not. The poets featured speak on the best qualities of the animals they’ve owned, what it was like to live with them every day and then, unfortunately, what it was like to lose them in the end. 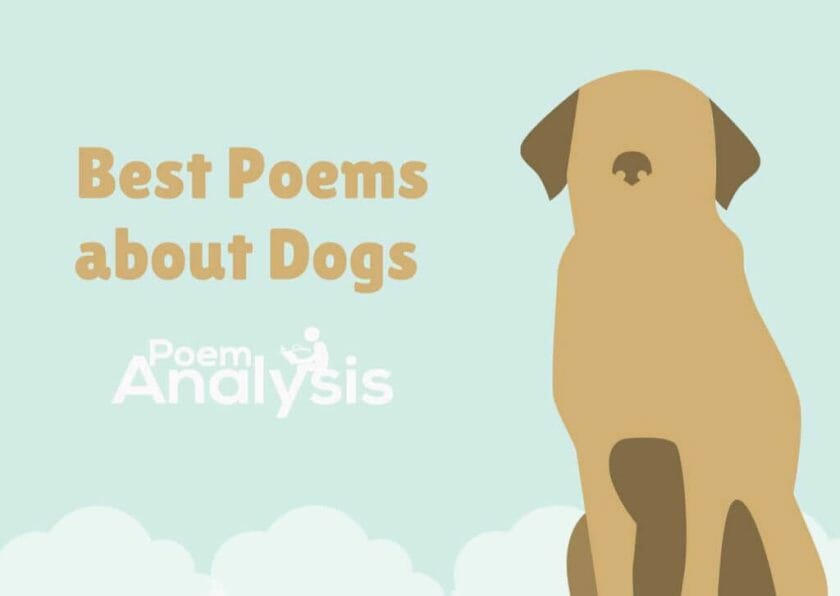 A Dog Has Died by Pablo Neruda

Neruda composed this piece in response to his own dog’s death. In the first lines, he states, very clearly, as was his style, that his dog died and was buried, and one day he too will join him in the ground. These lines are conveyed without emotion, as though death was a simple fact of life. The centre stands of the text Neruda does feel something for this animal, and for all dogs.

Then, the conclusion comes back around to a simple statement of fact “he’s gone…and that’s all there is to it”. With the theme of death running throughout, Neruda also addresses life and the afterlife. He states that the doesn’t believe in “any promised heaven in the sky / for any human being”. But, he does believe in one “for all dogdom”.

In ‘Lost Dog’ Bass tells the story of an owner’s search for their lost dog. She took familiar actions, called the dog’s name and listened carefully for the sound of his “tag against collar” but there was nothing. Very suddenly it turns out that all is fine. The dog made its way home and is none of the things the speaker feared the most.

The poem concludes with a few lines describing how content the speaker feels every time she sets her eyes on her dog.

Epitaph to a Dog by Lord Byron

‘Epitaph to a Dog,’ also known as ‘Inscription on the Monument to a Newfoundland Dog’ was written in 1808 after his dog Boatswain had died of rabies. Byron’s love for the dog is well documented and demonstrated by the size of his tomb at Newstead Abbey. The first part of the text is an introduction written by Byron’s friend John Hobhouse.

The poem compares the demeanour, levels of courage, and fates of men and dogs. Byron mourns the fact that dogs are “Unhonour’d” and “unnotic’d” even though they have so much worth. They are even “Deny’d in heaven”. The poem concludes with Byron referring to his lost dog as the only friend he ever knew.

In ‘My Dog Practices Geometry’ Essinger addresses her fellow poets and pushes back against a dislike of personification. The most poignant parts of the poem depict the speaker’s dog using “geometry” to track squirrels or rabbits in the yard. The poem is upbeat, humorous, and exciting as the last lines depict the dog chasing down a squirrel, and then getting waylaid by their own opinion of their owner’s powers.

In ‘Dharma’ Collins addresses the movements and upbeat personality of a dog who “provides a finer example / of a life without encumbrance”. The dog is more impressive than Thoreau at Walden and Gandhi with “his staff and holy diapers”.

Th dog does not need possessions, she has only what she carries on her body. Her “blue collar” and her “west nose,” followed “by the plume of her tail”.

The last lines are amusing as they bring in a few things the speaker wishes they could change about the dog. The poem then ends movingly.

A little Dog that wags his tail by Emily Dickinson

Emily Dickinson begins this poem by speaking on the joy that one can take from seeing a dog wag its tail. It is a simple pleasure, stirred by unadulterated joy. This image reminds her of a boy who gambols without “an earthly cause”. He does so because “he is a little Boy” and that’s all. Both the dog and the boy act in accordance with their own instincts.

In the last lines, she speaks on a cat and its war with a mouse then turns to address a class of adults she dislikes. These are people who look down on children acting like children and the play they engage in.

in ‘Dog’ Ferlinghetti describes a dog’s perspective. What he sees when he “trots freely thru the street”. There are things that are smaller than himself and larger. He smells things like himself, and unlike himself. The dog does not have use for things like cops nor does he worry about the buildings and factories. He goes on, alluding to politics, freedom, and the proper way to live one’s life.

Also know as ‘Ill Never Forget a Dog Named Beau,’ this poem was written by stage and film actor James Stewart as a tribute to his deceased dog. The poem was recited on stage at The Tonight Show Starring Johnny Carson in 1981 and then published in a collection. Beau was a golden retriever who slept in Stewart’s bed, never came when he was called, had no discipline, and even once set the house on fire. The poem concludes solemnly with Beau’s death and the speaker’s phantom image of his dog dissolving.

The Power of the Dog by Rudyard Kipling

Kipling depicts the undying love that dogs have for their owners in ‘The Power of the Dog’. In the guise of a warning, the speaker addresses those who might five their money to buy a dog. They should know that they’re buying “Love unflinching that cannot lie”. There is the undeniable truth that one day, around fourteen years of life, the dog is going to die. It is at this point you will know for sure how much you cared about the dog and your heart will “tear”.

To Flush, My Dog by Elizabeth Barrett Browning

‘To Flush, My Dog’ is one of the longer poems on this list and, as the title suggests, is dedicated to the poet’s own dog. Flush was Browning’s cocker spaniel. The dog has been a loving friend to the speaker and she spends time complimenting Flush’s coat and attitude. Bishop also speaks on how he stayed with her throughout everything. His loyalty was unquestionable.