10 of the Best (and Easiest) Poems to Analyze

A great deal of classical and contemporary writing is a pleasure to indulge in. A few of the best examples are included in the list below.

A great deal of the poetry produced since we started putting our thoughts on paper drowns itself out in complex metaphors, indecipherable decades after they were written. Or, contains language that has fallen out of common use or is a better example of a poet’s desire to sound educated, through the twisting and manipulating of syntax, than it is an expression of any theme worth delving into.

These poems were selected for their ease of understanding, their clear representation of various poetic techniques, and their interesting historical backgrounds. If you’re looking for a powerful, but easy, poem to analyze, this article is for you. 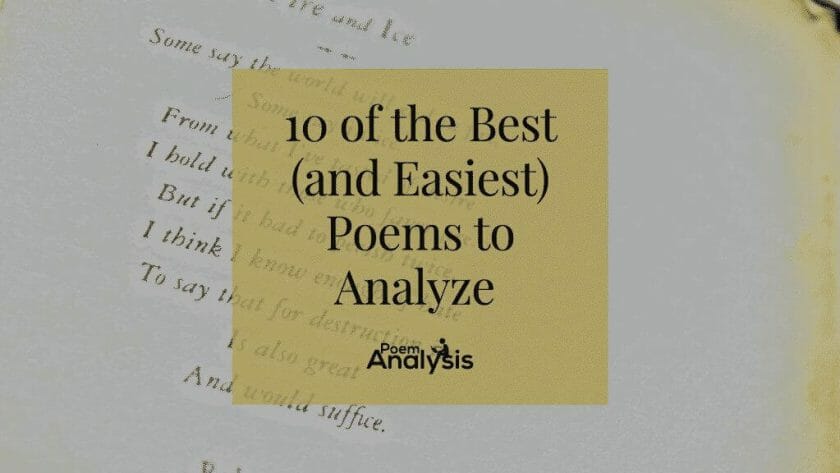 Not Robert Frost’s best-known work, but wonderful all the same, ‘Fire and Ice’ is the perfect choice for someone who is interested in analyzing a poem that speaks on themes of life, death, and opposites. The text is short, only nine lines, and repetition, juxtaposition and rhyme play important roles. Frost’s diction is clear and the syntax is straightforward.

Read an analysis of ‘Fire and Ice’ here.

Mother to Son by Langston Hughes

This poem was first published in December of 1922 in the magazine, Crisis. It was also included in Langston Hughes’ collection, The Weary Blues, published four years later. Within the text, Hughes uses the metaphor of a staircase to depict the difficulties and dangers one will face in life. The major themes are determination and wisdom. Told from the perspective of a mother, directing her words to her son, this piece is universally relatable. It clearly depicts themes and issues that are just as relevant today as they were when 100 years ago.

Read an analysis of ‘Mother to Son’ here.

A Dream Within a Dream by Edgar Allan Poe

Lovers of poetry, and even those who only enjoy it occasionally, will immediately recognize the line, “All that we see or seem / is but a dream within a dream.” Many examples of Edgar Allan Poe’s poetry are complex, filled with seemingly indecipherable images and mental landscapes, this piece is much simpler. The speaker knows that life is purposeless, there is no love nor is there reason to keep going. It has all turned into a dream state that he floats, and at the same time struggles, through.

Read an analysis of ‘A Dream Within a Dream’ here.

At its most basic level, ‘Still I Rise’ is a poem about confidence and empowerment. The speaker stands up to prejudice and preconceived notions of who she should be. Through the refrain, “I rise,” the reader should sense power building in the text. Repetition is used skillfully and effectively. This is likely Maya Angelou’s’ most anthologized work, making it a perfect option for those interested in analyzing a piece of her poetry.

Read an analysis of ‘Still I Rise’ here.

Do Not Go Gentle Into That Good Night by Dylan Thomas

Dylan Thomas’ best-known work, ‘Do Not Go Gentle Into That Good Night’ is a universally relatable poem that has appeared multiple times popular media since its publication. ‘Do not Go Gentle Into That Good Night’  was first published in 1951. Through powerful and skillfully composed language, Thomas encourages his father to realize the importance of his life by fighting back against the dark. Additionally, this piece had an important personal meaning to the poet, adding another layer of information you might choose to write about.

Read an analysis of ‘Do Not Go Gentle Into That Good Night’ here.

The New Colossus by Emma Lazarus

With an important historical context, Emma Lazarus’ ‘The New Colossus’ is another example of how poetry does not need to be complex and filled with complicated images to convey deep meaning. In ‘The New Colossus’ Lazarus speaks about the Statue of Liberty and the fundamental beliefs the statue is supposed to represent. Plus, with all the historical details connected to this piece, there is a great deal for a prospective analyzer to write about.

Read an analysis of ‘The New Colossus’ here.

If You Forget Me by Pablo Neruda

This is a love poem for those who aren’t interested in analyzing traditional stories of loss and heartbreak. Within ‘If You Forget Me’ Pablo Neruda speaks from a first-person perceptive and addresses his lover. He uses metaphors to compare their love to natural imagery and challenges them to forget him. If they do, he’ll have already “forgotten them”. Neruda uses accessible images and diction that makes this poem an interesting read and a great piece to take a deep dive into and analyze.

Read an analysis of ‘If You Forget Me’ here.

Usually read alongside ‘The Lamb,’ this piece is William Blake’s famous description of the darker, more dangerous side of God’s creation. Within the text, he juxtaposes the tiger with the kinder elements of the world, such as the lamb. Blake’s speaker asks the tiger where its eyes were made. As well as how any divine being could’ve made the decision to craft it in such a way. Although admitting his own fear of this creature, he also acknowledges its beauty and the skill it would’ve taken to create it. This piece is likely Blake’s most commonly anthologized. This means there is a great deal of information available about its composition and publication.

Read an analysis of ‘The Tyger’ here.

Also known as ‘I Wandered Lonely As A Cloud,’ this piece is one of William Wordsworth’s most popular. It describes one speaker’s progression through fields and hills on which he observes a “host, of golden daffodils”. The natural imagery is quite strong and depicted clearly. Using metaphors and similes Wordsworth also speaks on his own state of being while in natural environments. Then, how he takes that experience back into his less invigorating moments. The consistent rhyme scheme imbues ‘Daffodils’ with an even rhythm, taking the reader calmly and smoothly through the lines. As with most of the poems on this list, there is information readily available about this poem making analyzing it all the simpler.

With its straightforward syntax and clear diction, ‘Trees’ is the perfect poem to analyze if you’re interested in themes of nature, poetic writing, and creation. The poem was written in February of 1913 and was first published in Poetry: A Magazine of Verse. It was then included in Trees and Other Poems, one of Joyce Kilmer’s most popular volumes. Within this piece, Kilmer depicts a single tree standing in as a representative for all trees. It is, he states, lovelier than any poem he, or anyone else, could ever write. Throughout the text, he praises God’s creation and speaks on man’s inability to create anything close to as majestic.

Read an analysis of ‘Trees’ here.