Elizabeth Barrett Browning was born in Coxhoe Hall, Durham, England in March of 1806. Browning was educated at home and began writing poetry at the age of four. During these early years her family compiled her poems into a work titled, Poems by Elizabeth B. Barrett. It was also around this time that she began to deal with an unknown illness. She had intense headaches and spinal pain that degraded her mobility.  She was plagued by these symptoms for the rest of her life.

During the early 1840s Browning wrote a great deal. She published the poem ‘The Cry of the Children’ in Blackwoods, condemning child labour.  In 1844, she published two volumes of her work as well as two essays in The Athenaeum. She was a candidate for poet laureate alongside Tennyson in 1850 and is considered one of Britains best-loved and prolific poets.

Elizabeth Barrett Browning married Robert Browning in September of 1846. The two lived in Italy for the rest of Elizabeth’s life. Browning’s health began to decline in the early 1860s. She had developed what might have been tuberculous ulceration of the lungs and died in June of 1861. 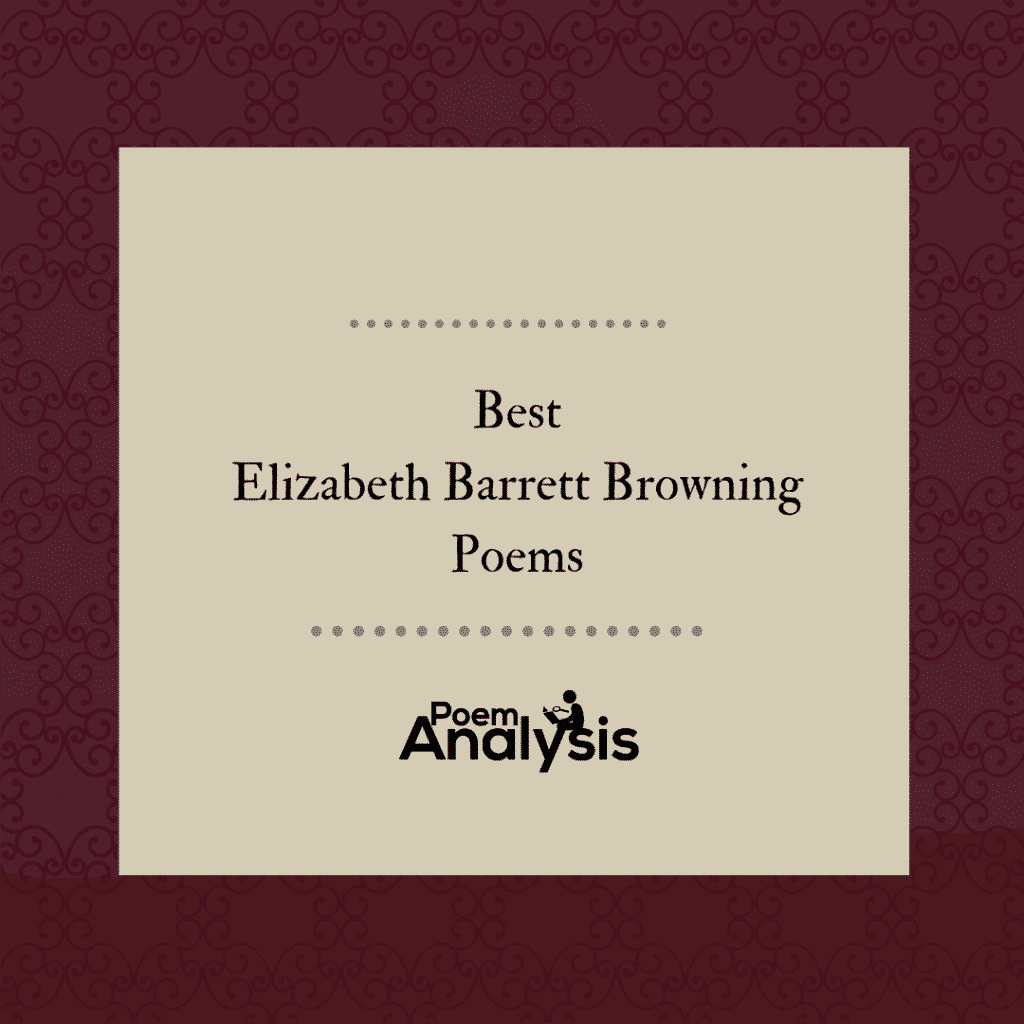 ‘Grief’ by Elizabeth Barrett Browning tells of the necessary conditions for feeling true grief and the way it transforms one’s body and soul. Grief is the most important theme of this work and through the text Elizabeth Barrett Browning describes the different forms it can take. Having experienced a great deal of it herself over the previous years this poem seems to be an outpouring of what she learned. The basic outline of her assertion is that grief does not make itself known through spectate-like sobbing. Instead it turns one into a desert. The sufferer becomes “like a statue / set in everlasting watch and moveless woe.”

The speaker describes how in grief one’s soul becomes like a desert and their body a statue. There is nothing to remove them from this state. In fact, it gets worse every day as the sun (their troubles) beats down on them. In conclusion, she tells the reader that only when one can “weep” will their grief be relieved.

‘Died…’ speaks on the impact of one person’s death while also exploring the immorality of passing judgements, good or bad. The poem consists of a conversation between a husband and wife, and then between the wife and a larger group. They had all been discussing a man who had recently turned up dead. Now that the man is dead though, the speaker decides, there is no point to declaring him to be one thing or another.

She makes the point that anything one says against a dead person is wasted. They’re in the ground, surrounded by dust and flies and they have no use for criticism. Through the next lines the reader is reminded that this man is not going to be the last to die, everyone is mortal and will eventually reach the same end. The speaker is very adamant about the fact that everyone is going to end up as a “was” in awe of God’s “am”. In conclusion, Elizabeth Barrett Browning’s speaker encourages everyone, those listening and those reading, to try to be better. Everyone’s time, she states, is better spent helping others than tearing people down through idle words.

“If thou must love me…” follows the pattern of a traditional Petrarchan sonnet and declares the speaker’s intentions for how she is to be loved. The speaker declares that she does not wish to be loved for any reason other than for love’s own sake. She doesn’t want her lover to love her for her smile or the way in which their thoughts are similar, as these things are liable to change over time. She would rather not be loved, then have love lost to her.

The speaker hopes that her lover will love her simply because he does, as this love will not be “unwrought” by time. No matter how hard one works for love, if it is based on trite principles of 17th century relationships, such as mannerisms and looks, it will not last forever. She desires a love that will last through “eternity”.

This poem describes the experiences of a person trapped on board a ship at sea. Throughout the text, the speaker is stuck on a “solemn ship” that is sailing into the deep blackness of the sea. She has no way off the craft and is despairing over the coming of the sabbath.

Rather than mourn the fact that she isn’t with her “sweet friends” and the “stolèd minister” she glorifies the world around her. The speaker tries to find something beautiful in the turning sea and emotionless sky. She turns to optimism, and her faith, rather than to the despair that very well might overcome her.

“George Sand: A Desire” is poem dedicated to the French writer Amantine-Lucile-Aurore Dupin who wrote under the name, “George Sand”. The poem begins with Elizabeth Barrett Browning praising the writer for her brains and her heart. She takes on the qualities of both man and woman in her writing, a technique that the speaker admires. Browning calls out Dupin for her choice to be known as George Sand, and then continues on to celebrate the strength it took for Dupin to write as she did, and about what she did. She answered the world “roar for roar”.

‘Let the world’s sharpness’  Sonnets from the Portuguese 24

‘Let the world’s sharpness’ is a Petrarchan sonnet that proposes a resolution to the world’s strife. The poem begins with the speaker comparing the end of the world’s problems with the action of closing a “clasping knife”. The blade, or the terrors of the world, is now out of reach and can’t harm anyone. The hand that closed this knife belongs to Love. Or as is later made clear, the hand of God’s love. Browning concludes with the speaker promoting the love that God fosters and the strength he has to control life and death. No man will be able to change the world in the way that God’s love is able to.

This poem describes the decimation of a riverbed and the crafting of the god Pan’s famous flute. There is an interesting mythological background to this text. In the first line the speaker references the “great god Pan…Down in the reeds”. This character is the main subject of Browning’s poem. He is the god of the wild, flocks and rustic music. He often carries a flute, as he does in this text.

In the mythological record, it is said that Pan fell in love with and pursued a wood-nymph Syrinx. She attempted to escape his advances and in order to save her from him, her sisters turned her into a reed. Pan was troubled by this as he could not figure out which reed, of which there were many, she had become. Rather than searching, he cut out seven pieces and fashioned them into the flute that now carries his name.

The Best Thing in the World

Elizabeth Barrett Browning uses the reader’s senses to create individual vibrant images within ‘The Best Thing in the World’. The forces of truth, pleasure, or beauty will have different connotations within the reader’s mind. This means that Browning’s poem creates a variety of images for each person, depending on their own life experience. Browning’s speaker lists out features, experiences and forces of the world she loves the most. All of these, from natural beauty to the south wind and harmless truth, are united by their intangibility. The last lines summarize the fact that the best parts of the world are things that humanity cannot physically grasp on to.

‘Patience Taught by Nature’ was published in 1845 in Browning’s collection of poems, A Drama of Exile: and other poems. She wrote the poem as a reminder to readers that there is a whole world beyond one’s own that is uninfluenced by the dreary, everyday problems of human life. She speaks on the desire to live up to God and the pain through which one struggles to find meaning in life. As this struggle is going on the ocean still encircles land, grasses still blow on the savannah, hills still sit and watch, and stars still shine. The leaves will fall from the trees as they always have and through this break in the foliage the speaker can gaze upon the eternal stars.

Another of Browning’s most memorable sonnets, ‘Say over again,’ depicts the need a speaker has for her lover to continually tell her how important she is and how much she means to him. He must tell her over and over again that he loves her. this will prove that her doubts have no place in her mind and allow spring to bloom. The darkness of her mind will recede, just like winter, and endless stars and flowers will appear. But, she adds at the end, he should also care for her in the silence of his soul.