10 of the Best Emily Dickinson Poems

On this list, readers will find ten of the best Emily Dickinson poems. They are moving, complex, and characteristic of the poet’s broader oeuvre.

Emily Dickinson was born in Amherst, Massachusetts in December of 1830 to a moderately wealthy family. She was frequently ill as a child, a fact which something contributed to her later agoraphobic tendencies. Dickinson never married, but became solely responsible for the family household. Solitude, and the pleasures and pains associated with it, is one of Dickinson’s most common topics—as are death, love and mental health.

During her lifetime Dickinson wrote hundreds of poems and chose, for a variety of reasons, to only have around ten published. After her death, her sister Lavinia discovered a collection of almost 1800 poems amongst her possessions. The volume, Complete Poems was published in 1955. Dickinson is now one of the most popular poets of all time and is credited with writing some of the most skillful, and beautiful poems the English language has ever seen. 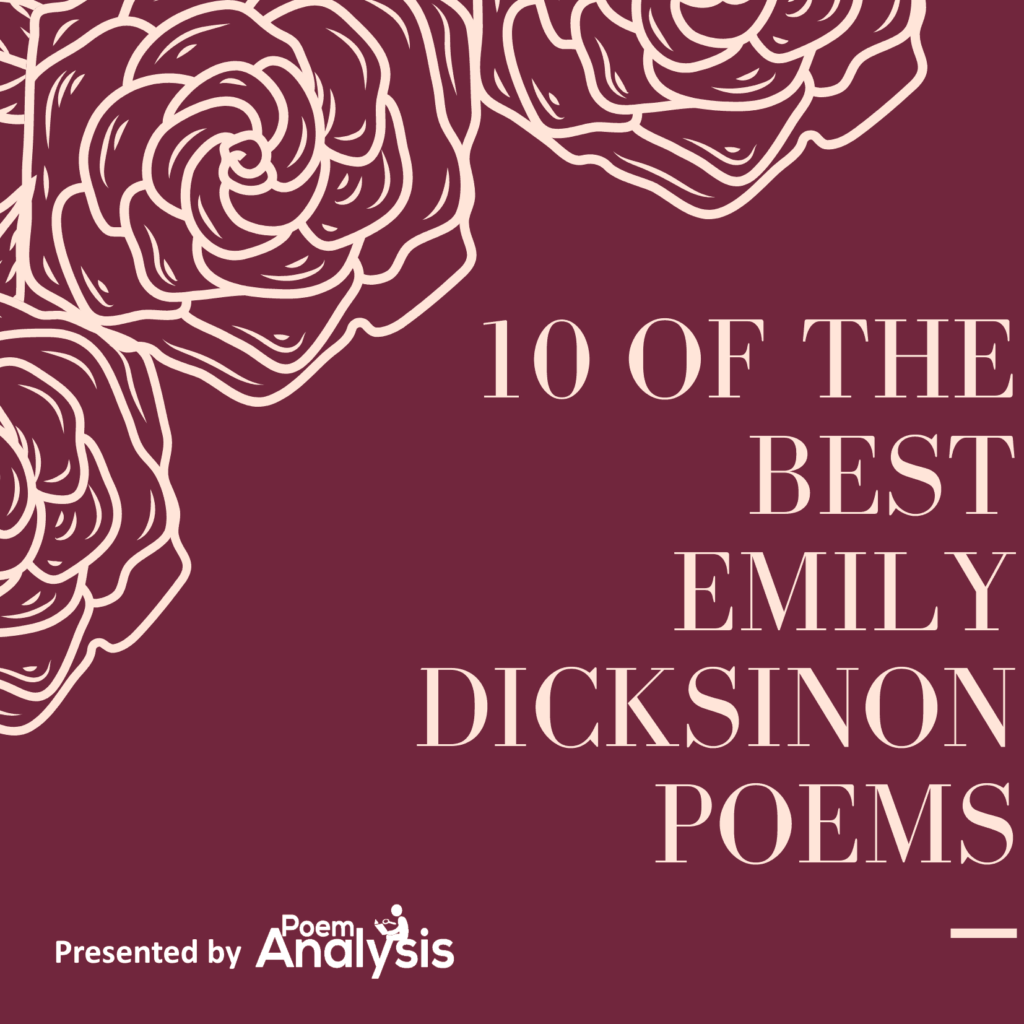 In this poem the reigning image is that of the sea. It is skillfully used as a metaphor to depict passion and desire. This poem is often displaced from the minds of those who consider Dickinson’s life. It speaks to powerful love and lust and is at odds with the common image of the poet as a virginal recluse who never knew true love. The details of her life suggest otherwise as does this text, to some readers anyway.

There is an alternative interpretation of ‘Wild nights – Wild nights!’ though. There are those who believe that Dickinson was speaking about her passion for God, another common theme in her works, rather than sexual love.

Tell all the truth but tell it slant

The title outlines the major themes of this playful poem. That one should tell the truth, but not straightforwardly. This is associated  with Dickinson’s own writing practice and her fondness for similes and metaphors. Slightly complicating a truth will make it more interesting to a reader or listener. If one has to look a little harder, then in the end the reward will be greater when the truth is made clear.

I’m Nobody! Who are you?

This poem speaks on the pleasures of being unknown, alone and unbothered by the world at large. It displays Dickinson’s characteristic writing style at its finest, with plenty of capital letters and dashes. The poem also connects to her own personal life. Emily Dickinson published very few of her more than 1500 poems during her lifetime and chose to live simply. This seems to be something she is advocating the pleasures of within ‘I’m Nobody! Who are you?’

Because I could not stop for Death –

As the title suggests, this is another Dickinson poem that deals with death. In this case, the narrator is on their deathbed, not yet embarking on their own ride with “Death.” Everyone is gathered around this dying person, trying to comfort them, but also waiting for the “King.” In amongst all the grandeur of the moment, there is a small fly. This is how Dickinson chose to personify death in ‘I heard a Fly buzz – when I died.’ It moves between the speaker and the light in the room and that is the end.

Hope is the thing with feathers –

This is perhaps Emily Dickinson’s best-known, and most loved poem. It is much lighter than the majority of her works and focuses on the personification of hope. It is a bird that perches inside her soul and sings. The bird asks for nothing. It is at peace, and is, therefore, able to impart the same hope and peace to the speaker. She can depend on it, and take pleasure from it. The text is also prime example of the way that Dickinson used nature as a metaphor for the most complicated of human emotions.

Emily Dickinson was born in Amherst, Massachusetts in December of 1830. Her parents were prominent in local society but were not wealthy.
Read Emily Dickinson's Biography

It seems that death was a theme that Dickinson could not get away from. Within this poem she again touches on it and depicts it as something that is in the end, desirable. The speaker moves through the things that a human being wants most in their life. The first is an active pleasure. But for some, this is impossible. Next on her list is an escape from pain. If life could progress without trauma, that would be enough. Lastly, there are sleep and death. It is better to die, the speaker implies than to live a life of suffering, devoid of pleasure or peace.

My Life had stood – a Loaded Gun –

The gun is a powerful and moving image in this poem. It, and later Mount Vesuvius, represents the anger that builds up inside one’s mind and heart until it can be contained no longer. The problem with letting it out is that it can never be captured again. It is loose, in the world, wreaking havoc. She implies in the text that the gun can kill, but cannot be killed. The metaphorical shooter of the gun is not in control of their anger if they give into it. Scholars have tried to connect the anger described n the poem to Dickinson’s personal life. But without specific details confirming this, it is easier to read the text as a general statement on human temperament.

A Bird, came down the Walk

This piece is slightly more straightforward than some of Emily Dickinson’s more complicated verses. She makes use of natural images, triggering the senses, as she speaks on a bird and its eyes and “Velvet Head.” The poem chronicle the simple life of a bird as it moves from grass to bugs and from fear to peace. Dickinson also makes use of original words such as “plashless.” A feature that alludes to her well-known love of words and the power of meter.

I felt a Funeral, in my Brain

Emily Dickinson wrote prolifically on her own struggles with mental health and no piece is better known than this one in that wider discussion of her work. Within the text she uses various metaphors, concerned with life and death, to discuss endings, beginnings and the deep, unshakable fear of losing one’s mind. The speaker depicts the slipping away of her sanity through the image of mourners wandering around in her head. They are in a cycle of sorts, unable to break out or change their pattern.