10 of the Most Famous English-Language Poems

From William Shakespeare to Emily Dickinson and Maya Angelou, the poems on this list have become some of the most popular English-language poems ever written. Many of these tap into familiar themes, such as love, loss, death, and the power of natural landscapes. Explore more of the best poems ever written with our Top Ten Series. 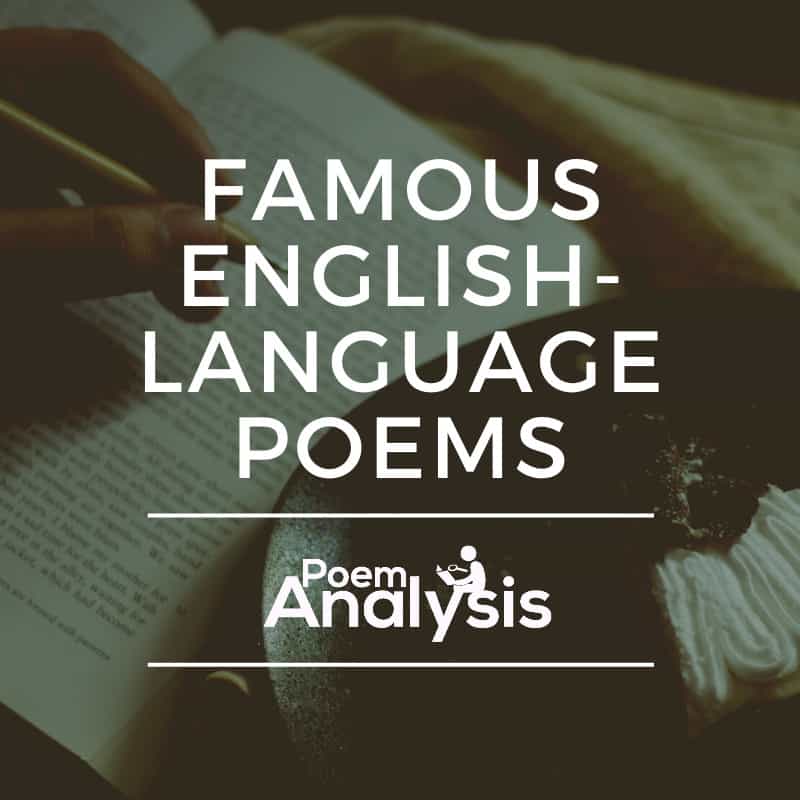 Ode to a Nightingale by John Keats

Nature, freedom, and transcendence are some of the most important themes of ‘Ode to a Nightingale,’ the first poem on our list. It is likely one of Keats’ most well-known poems and in it, the nightingale plays an important role. The speaker listens to it sing and feels jealous of its carefree life. Inspired by the song, he considers giving himself over to the woods and trying to seek out the same kind of freedom the nightingale has. He even thinks about allowing himself to die in the woods. This beautiful vision that the speaker is entranced by is broken when the bird flies off and leaves the speaker alone. The confusion he felt at the beginning of the poem returns and he is unable to determine what was real and what was a dream.

Because I could not stop for Death – by Emily Dickinson

‘Because I could not stop for Death’ is undoubtedly one of Dickinson’s most famous poems. It is common within her works to find death used as a metaphor or symbol, but this piece far outranks the rest. “Death” appears as a real being. He takes the speaker by the hand and guides her on a carriage ride into the afterlife. There is a simplicity to the lines which puts the reader at ease. Any fear associated with the afterlife is far from one’s mind. Instead, a reader is treated to images of the “Setting Sun” and children at play. It is generally considered to be one of the greatest poems in the English language and speaks on universal themes.

This sonnet is perhaps one of Shakespeare’s greatest sonnets, or at least his most quoted. It begins with the line “Shall I compare thee to a summer’s day?” The answer is clearly yes, as the following thirteen lines are devoted to doing just that. The listener is better than even the best parts of summer. They are “more lovely and more temperate.” The most important part of the poem comes at the end where a real distinction is drawn between the listener and a perfect, warm sunny day. The summer is temporary, it isn’t going to last. But, luckily for the listener, their beauty is. Their face (and maybe their mind too) are like “eternal summer.”

The Road Not Taken by Robert Frost

This poem is by far Frost’s most popular and ranks at the top of many poetry lover’s lists. The scene described in the text is a pastoral one. The trees are changing colors and there are leaves on the ground. There are two paths set out before the speaker and it is up to him to choose which one to travel down.

One of the two seems to be less worn than the other, but after closer inspection, the reader should realize they are both the same. The decision he makes at this moment is spoken of as if it was life-changing. At the time he thought he might go back and try the other path, but he realizes that this is never going to happen. He is stuck with the path he chose.

‘Oh Captain! My Captain!’ is an elegy devoted to a deceased “Captain.” This unnamed captain was a great leader, and someone the speaker knows the world will miss. At the beginning of the poem, the captain-less ship sails home to port and are greeted by a celebrating crowd. The speaker wishes the captain were there to see and feel the excited people onshore, and wills his body to rise from under the deck. It is a commonly known fact that this piece was written soon after Abraham Lincoln’s death and that he is intended to be the dead captain. This poem is one of the best-known poems of Whitman.

This poem is one of the famous poems of Shelley. It describes a ruined statue of a king in an empty desert. The statue has a powerful message emblazoned on it saying “Look on my Works, ye Mighty, and despair”. But, considering the other details that have already been provided to the reader, it is clear that none of these works have survived. Any great cities or monuments the king built have fallen.

The poem was released in 1818 and published the same year in The Examiner of London. Nowadays, it is frequently anthologized. Historically, the source of the name Ozymandias is also interesting. It refers to the Egyptian pharaoh Rameses II. The history of this pharaoh, and the acquisition by the British Museum of a segment of a statue of the king, are thought to have inspired Shelley to write the poem. The poem speaks on themes of both time and history.

’Lines Composed a few Miles above Tintern Abbey’ is told from the perspective of the writer and speaks on the power of “Nature” to guide one’s life and morality. The poem was published in 1798 and begins with the speaker, Wordsworth himself, having returned to a spot on the banks of the river Wye that he has not seen for five long years. This place is very dear to him and is just as beautiful and mystical as it was when he left. The poem is considered to be one of Wordsworth’s best and has inspired debate, study, and adoration for centuries.

The Rime of the Ancient Mariner by Samuel Taylor Coleridge

This poem is most certainly Coleridge’s best-known. It was written between 1797 and 1798 and first appeared in Lyrical Ballads. It is a frame narrative focusing on the story of a mariner who wants to tell his story. Broadly, it is based around one man’s choice to shoot down an albatross and the bad luck that strikes the ship afterward.

It is thought that Coleridge was inspired to write ‘Rime of the Ancient Mariner’ while spending time with William Wordsworth and his sister Dorothy. Wordsworth himself claimed to have given Samuel Taylor Coleridge the basis for the story by relaying the narrative of another story, A Voyage Round The World by Way of the Great South Sea by Captain George Shelvocke, published in 1726.

At its most basic level, ‘Still I Rise’ is a poem about confidence and empowerment. The speaker stands up to prejudice and preconceived notions of who she should be. She determines that she is valuable and deserving of respect. The refrain, “I rise” is used throughout, gaining intensity as the poem progresses. Towards the end, the speaker proudly states that she is leaving behind her own history. As well as the “nights of terror and fear”. She is headed into the light, bringing with her the “gifts that [her] ancestors gave”. This poem has appealed to readers of all genders, ages, and ethnicities for its empowering message and bright, optimistic tone.  It’s one of the best-loved poems by Angelou.

‘If’ is inspired by nature imagery and themes of youth, coming of age, and experience. It is not until the end of the poem that it’s revealed the speaker has been addressing his son, giving him advice on how to live his life. There are several examples in the text of adverse conditions one might come across. They are followed by how best to surmount them. Anything can upset one’s life, and it is necessary to be prepared for when that happens. The “If” portion of the poem is complemented by the “then” portion. Every scenario is followed by a solution. If the son does as his father suggests he will be set to conquer the world. He will become a “Man”. It’s one of the most famous poems of Kipling.