10 of the Best Poems About Fire

Passion, loss, beauty, these are only some of the many themes addressed in this collection of poems by writers such as Robert Frost and Elinor Wylie. Their works are as different as their own life experiences but each one included here taps into the power, physically or metaphorically, of fire. Explore more of the best poems ever written with our Top Ten Series. 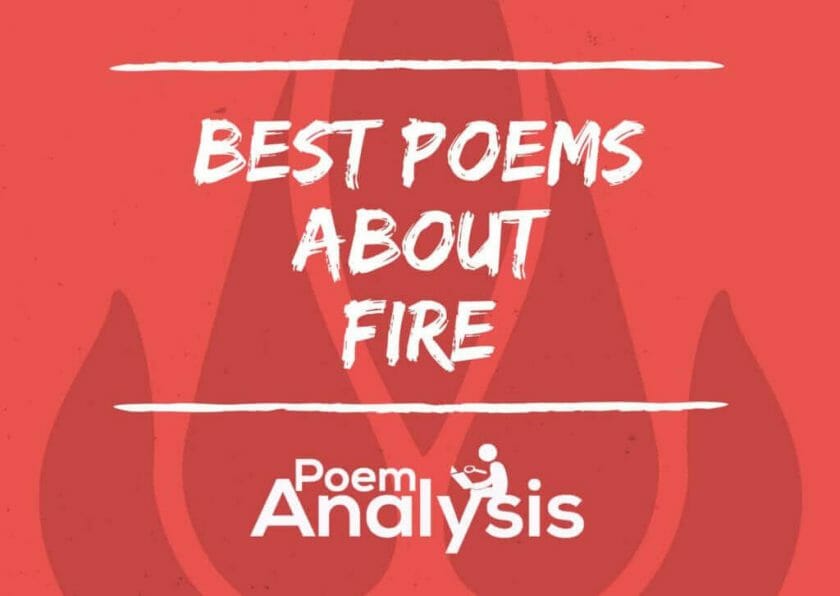 The first poem on this list is a sonnet that speaks on grace, the true nature of animate and inanimate beings. It begins with the speaker giving a few examples of how things, animate and inanimate, show their inner selves. The kingfisher catches “fire” as do the “dragonflies.” There is the sound of a rock falling in a well, and that of a hammer hitting the inside of a bell. These are the purposes of these objects and animals.

Through their expression of their inner selves, they grow close to God. This is the same for human beings. If one taps into their most essential self, then they too will be inhabited by Christ and seen in a good light by God.

This short nine-line poem is quite impactful. It speaks to the end of the world and whether it is going to end in “ice” or in “fire”. Some say one, the speaker explains, and some say the other. But, he is of the opinion that fire is going to bring about the end of life on earth. The poem concludes with the speaker explaining that death by “ice” would also be “great”. This piece is one of Frost’s most popular poems and was published in December of 1920.

A Refusal to Mourn the Death, by Fire, of a Child in London by Dylan Thomas

This tragic poem tells of a speaker’s inability to comprehend the number of lives lost in London during World War II. There is only one point, the speaker states at the beginning of the poem, at which he will allow himself to mourn the death of a “child.”

Real or imagined, this child died in a fire in London. It was obviously a sorrowful event, but the speaker will not truly feel for her until it is time for him to face his own death. He knows that he will return to the place from which he came, wherever that may be, as will all those who died during the war, and all the time after. Death is equal across all of time and space.

The Bombardment by Amy Lowell

‘The Bombardment’ is a narrative poem written in the style of the Imagist movement. It is devoid of extraneous details and gets right to the heart of the drama. In this case, the text, which is divided into long paragraph style stanzas, speaks on the bombing of “Cathedral square”. The narrative is told from the perspectives of three different characters, a woman, a scientist and a child. The three are all caught in the bombardment of the city and then forced to contend with the fire that rages afterward.

Perhaps Blake’s best-known poem, and certainly one of the most widely anthologized, ‘The Tyger’  delves into the nature of God and creation. The speaker considers the ferocity of the tiger and how they are supposed to reconcile its fearsome nature with the goodness and peacefulness of God seen through other elements of his creation. Blake’s speaker asks the tiger where its eyes were made and how any divine being could’ve made the decision to craft it in such a way. Although admitting his own fear of this creature, he also acknowledges its beauty and the skill it would’ve taken to create it.

‘Little Gidding’ is named after an Anglican community from the 17th-century. It was and still is, considered a very devout place. The poem is the fourth and final poem in Eliot’s Four Quartets. Throughout the text Eliot uses the image of the Pentecostal fire to speak on purification. He has come to the conclusion that humanity is flawed due to its separation from God. This is what has led the world down its war-laden path. By the end, it is unity, the past present and future that becomes the most important thing. It is what is needed for salvation.

Fire and Sleet and Candlelight by Elinor Wylie

In this short poem by Elinor Wylie, the reader hears from an impassioned narrator who speaks about a wasted life. The poem is directed at a specific listener, “you”. The listener of this piece has dedicated their life to a pursuit that has taken them away from the pleasures of life, particularly youth. The listener has metaphorically dragged his/herself along a “jagged road.”

It becomes clear at the end of the poem that the listener’s life has come to a close. It remains unknown what exactly the listener spent their life doing that the speaker considers unworthy of them. The title of this piece likely refers to the general nature of the listener. He/she is consumed in burning heat, freezing cold, and straining under candlelight

The Armadillo by Elizabeth Bishop

One of Elizabeth Bishop’s best poems, this piece describes the beauty and destructive power of fire balloons let off in honour of a saint’s day. The poem takes the reader through the previous night’s events. First, the speaker focuses on the beauty of the balloons and how they appear against the night sky. They mimic the stars and the planets. But, when they fall, they’re deadly.

Like a cracked egg one landed behind her house. She went out to look at it and noted the terror the fire struck into the surrounding creatures. The speaker saw owls, armadillos, and rabbits fleeing the woods. This piece delves into themes of tradition, death and destruction, as well as fear and the delicacy of the human condition. The tone is direct, unreserved, and clear, therefore enabling the poet to create a solemn mood.

My Love is like to ice, and I to fire by Edmund Spenser

In this poem, the poet describes the contradictory but also complementary personalities of the one speaker and his lover. The poem begins with the speaker stating that he is like fire and his lover is like ice. Although they are different from one another their love is strong. It becomes clear as the poem progresses that it is due to their differences that their love succeeds. The woman’s ice is not melted by his fire, nor is his fire “allayed” by her cold.

The poem concludes with a couplet that answers all of the speaker’s questions. It is love that has given their relationship the power it needs to succeed. Love has the ability to overcome all types and kinds.

Verses upon the Burning of our House, July 10th, 1666 by Anne Bradstreet

In the last poem on this list of works about fire, the poet speaks on losses she suffered during the great fire of 1666. The poem begins with the first moments Bradstreet realized her life was changing. The speaker woke to screaming on the street and realized everything was on fire. She fled the house and watched as it, and all her possessions were destroyed.

She is at first thankful that God saved her. But, as time goes on, she mourns for the physical items destroyed. The poem concludes with Bradstreet revoting herself to God and trying to move on from the past.

Emma graduated from East Carolina University with a BA in English, minor in Creative Writing, BFA in Fine Art, and BA in Art Histories. Literature is one of her greatest passions which she pursues through analyzing poetry on Poem Analysis.
Subscribe
8 Comments
Newest
Oldest Most Voted
Inline Feedbacks
View all comments