The poets on this list engage with themes of freedom, confinement, dreams and reality. Ranging in style and perspective, each, from Ezra Pound to Edna St. Vincent Millay, has a different way of depicting what it means to be free, or to have that freedom taken away. Dig deeper into some of the best poems ever written in our Top Ten Series. 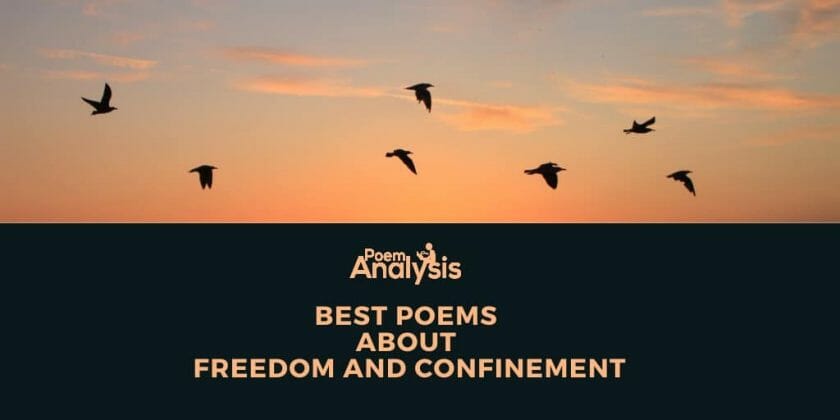 Best Poems about Freedom and Confinement

‘Lioness Asleep’ by Babette Deutsch is a Shakespearean sonnet that tells of the plight of a captive lioness whose only escape is through her dreams. The poem depicts the lioness entering an intensely realistic dream after eating a meal. The food sent her a few moments of bliss in which she imagined herself dozing in the desert of Africa. It is only there, in her dreams, that she is able to live the life that she wants and have true freedom.

The Lake Isle by Ezra Pound

‘The Lake Isle’ is a two stanza poem that speaks on the same themes as ‘The Lake Isle of Innisfree’ by W.B. Yeats. The poem begins with the speaker asking the gods, as he does multiple times in the text, to give him something. This time it is a tobacco shop. This simple building and business represent something larger in the poem—freedom and escape from the bustling modern world of endless commerce and industrial advancement.

As the poem progresses Pound’s speaker asks for other things, much of which would obviously be contained within his shop. In conclusion, the speaker who has begun to sound more and more like Pound himself, asks that the gods do something, anything, to remove him from his “damn’d profession of writing”.

Warning’ by Jenny Joseph describes what the future has in store as one grows older and throws off societal restraints and expectations and enters into a new period of freedom. The poem some of the many new experiences and attitudes the speaker is going to be able to engage in and experience when she is an “old woman.” All of these things are impossible now because of one’s ingrained sense of what is socially acceptable. The speaker plans to wear whatever she wants, eat as many samples from shops as she can, and say whatever comes to her mind.

The Ballad of Reading Gaol   by Oscar Wilde

“The Ballad of Reading Gaol” is Wilde’s most successful poem and was his last great work written before his death in 1900. It tells of Wilde’s experiences in prison and his observations of another prisoner condemned to die. The poem is 109 stanzas separated into six sections. The poem begins with a discussion of Charles Thomas Wooldridge who was condemned to die in 1896 for murdering his wife in a jealous rage. During an argument, they tumbled onto the street, and he slit her throat with a knife. After the murder, he begged the officers to arrest him and mourned his action until his death.

While in prison in Wilde’s poem, Wooldridge meets his death bravely while the other men cower from the idea alone. In the third section of ‘The Ballad of Reading Gaol,’ Wilde describes the daily activities of the prisoners and the way they spend their nights. They are haunted by phantoms that seem to be alive. The rest of the poem describes the funeral of Wooldridge and how his body was covered in lime. It also speaks on Wilde’s general ideas about the justice system and that one must come to God to find happiness.

At Home by Christina Rossetti

Within ‘At Home’ Rossetti depicts the plight of a ghost who is cut off from her home and friends by death. The poem begins by describing what it was like when the speaker was first dead. She returned to her home and observed her close friends. They were under a tree, eating fruit drinking wine and discussing their plans for tomorrow. All three of these things are impossible for the speaker to do but it is the planning that depresses her the most.

Now that she is dead she is stuck in the past and states specifically that no one wants to go there. Her friends take turns shouting out their desire to go on to “tomorrow.” The poem concludes with the speaker describing how she is trapped within her home, unable to stay in one room and spend time with other people. Her surroundings are all the same as they were when she was alive, now she has changed irreparably.

Ode to a Nightingale by John Keats

In this poem, which is very likely Keats’ most well-known, the nightingale plays an important role. The speaker listens to it sing, and feels jealous of its carefree life. Inspired by the song, he considers giving himself over to the woods and trying to seek out the same kind of freedom the nightingale has. He even thinks about allowing himself to die in the woods. This beautiful vision that the speaker has been entranced by is broken when the bird flies off and leaves the speaker alone. The confusion he felt at the beginning of the poem returns and he is unable to determine what was real and what was a dream.

This piece tells of a speaker’s desperation to get out of her current physical and emotional space. She would like to find new, bird-like freedom. The poem begins with the speaker feeling shocked at the sight of wild swans flying over her home. There is something about their shapes on this day that strikes her. She is suddenly determined to look into her heart and pick out the parts of herself that have confined her. The speaker sees her current life as “Tiresome”. She is metaphorically chained to her daily emotional pattern She’d like to fly over the town, just like the swans.

By the end of the poem, the speaker decides that she is going to leave her home. She is also desperate for the swans to come back and show her again how to fly over the town. When this happens her heart will be free, her old life will sit far below her. All the possibilities the swans have access to will be hers as well.

The Eagle by Alfred Lord Tennyson

‘The Eagle’ is one of Tennyson’s shortest poems, consisting of a total of six lines. It presents the eagle as a powerful creature, alone and above the rest of the world. The singular focus on the eagle forces a reader to really consider the creature and the life it lives. This is especially emphasized in the last lines when he “like a thunderbolt…falls” as he dives towards the sea.

The Gypsy by Edward Thomas

Within ‘The Gypsy’ Thomas describes an encounter with a band of gypsies. He speaks on how they transported him. They’ve allowed him to experience a free world he’d never encountered before, with their music. The poem details a few moments of conversation between the speaker and a gypsy woman. The next lines focus on the sights and sounds around the woman’s brother. He stamps his feet and sings and plays the “mouth-organ.” The speaker describes the festivities in the camp as “Bacchanal.”

The speaker expresses a desire to thank the family sufficiently for the way he was transported out of his life. He appreciates the experience with a new emotional, dark and intense mental landscape. This experience has given him something to write about, and he can’t pay them back for that.

‘Apostate’ by Léonie Adams describes the freedom a speaker sees in the sky. It is embodied in the joyful stars and how she aches to live as they do. The poem begins with the speaker stating that she is watching the stars and marvelling in their movements. They are not out of control as humanity is, but gracefully “throbbing” with “joy.”

She sees this as an ideal way to live. In the following lines, she explains how the stars have been able to pierce the darkness of the sky. But they are still able to shine out for all to see. They have a power that is not controlled or regulated by any other than themselves.

In the final section, the speaker wishes that she could live as the stars do. They are without masks to hide behind or rules to follow.