10 of the Best Poems About Friendship

From Alfred Lord Tennyson to Katherine Philips, these poets describe in moving detail what it means to be moved and changed by friendship.

The poems on this list are ones of love, loss, dedication, and remembrance. Friendship is something intrinsic to humanity, and the poems we’ve selected are ones that are sure to resonate personally. After all, it’s not always about where you go, it is sometimes more important who you go with. 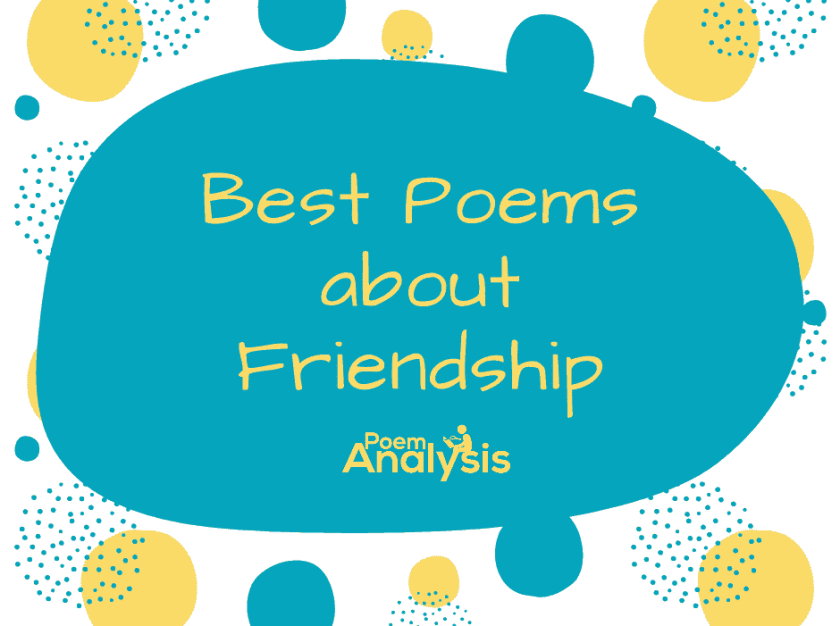 The first poem on this list was published in 1850 and was dedicated to a close friend of Tennyson’s, Arthur Henry Hallam. He died in 1833 at the age of 22. At the time he had been engaged to Tennyson’s sister, who was deeply impacted by his passing. Hallam was the subject of a number of poems Tennyson wrote in this period, and they were finally combined into this longer poem, ‘In Memoriam A.H.H.’. It is 131 sections long and contains both a prologue and epilogue. It is considered Tennyson’s masterpiece.

To My Excellent Lucasia, on Friendship by Katherine Philips

Alongside  ‘Orinda to Lucasia’ this is one of several wonderful pieces of poetry that Phillips wrote with the theme of friendship in mind. Philips lived in the mid-1600s and is one of the first female poets of note writing in the English language. Both poems are addressed to Philips’s close friend Anne Owens, known in the poems as Lucasia while Philips is called “Orinda”.

The entire text is dedicated to the way one woman changed another. Philips’s soul was revitalized by this relationship. She became an entirely different person once she knew she had Owens and would continue to know her for the rest of time.

A Time to Talk by Robert Frost

Within this piece, Frost speaks about the importance of friendship and how nothing should get in the way of greeting a friend who has come to visit. The poem begins with the speaker describing a situation in which his “friend calls” to him “from the road.” Neither the reader nor the speaker is aware of what the friend has to say. Of greater interest to Frost than the information that might be shared, is the speaker’s choice to set aside his “hoe” and go speak to his friend. This poem was meant to remind readers that it does not matter how tired one is or what work is left to do, a good friend “plod[s]” down and has a “friendly visit.”

This sixteen line poem speaks to what should be the invulnerable relationship between friends in good times and bad. The poem follows the life of a swallow, who comes to live in the speaker’s chimney during the summer months. He has become a part of the family, a friend who’s presence is welcome and expected. Things change when the winter months come: the sparrow’s need for “Man” is greater.

The speaker declares at the end of the poem that she desires a friend, the sparrow, someone who will sing with her “in frost” and will love with her “in sorrow.”This friend will never abandon her and always “greet her with his sight.”

Orinda to Lucasia by Katherine Philips

In this piece, Philips describes the importance and intensity of the relationship she held with her close friend, Anne Owens. The poem begins with the speaker describing what the world is like when it waits for the sun to rise. The night seems endless and the sun late to arrive in the sky.

The second part of the poem compares the speaker’s friendship with Anne Owens to the sun. Owens is as critical to Philip’s survival as heat and light are to birds and flowers. She knows she won’t survive much longer without her.

The Other Side by Seamus Heaney

This complex and moving poem is a depiction of the sectarianism between Protestants and Catholics in the 70s. The poet looks back on his own youth and the relationship he had with a neighbour who lived next door. At first, it is a poor one. The neighbour is a Protestant “stranger” and speaks poorly of Heaney’s family and their lands. As time passes, and the stanzas go on, the man becomes friendlier. By the end of ‘The Other Side,’ the neighbour has come to the Heaney home in order to get to know the family better and show a kindness he didn’t exhibit before.

On the Death of Anne Brontë by Charlotte Brontë

This terribly sad poem comes from the perspective of the poet herself. Charlotte describes her grief over her sister Anne’s death. They were very close, sisters as well as friends. The poem describes how Charlotte has lived to see a day she did not want to see when her most cherished companion has died. This person, her sister Anne, was so important to her that she would’ve died to save her if she could have.

In the final section of the poem, Charlotte turns her thoughts to God. She describes her desire to curse God for what he took, and thank him for reliving Anne’s pain. She concedes to her thanks and accepts the fact that she will have to live in a world without her remaining sister.

In this poem Frost speaks on life, death and the various ways one can approach the incontrovertible facts of mortality. It is an intricately layered work that delves into the difficulties of finding one’s own path through life and the correct companions to keep one company. Making use of an ironic and sometimes mocking tone, Frost confronts themes of life, friendship, death and one’s personal legacy.

A Song for New Year’s Eve by William Cullen Bryant

In ‘A Song for New Year’s Eve,’ Bryant discusses themes of change, memory, and hope. These are seen through Bryant’s depiction of the past and the fact that now, as the year is ending and friends are buried, all that’s left are memories. The “change” is undeniable. It’s going to come in the next hours as the old year ends and the new begins. There is nothing they can do to stop it.

There is a fear inherent in this fact of human life. The speaker doesn’t know if the next period of his life is going to be as fulfilling and generous as the previous. Hope is ever-present in ‘A Song for New Year’s Eve’. Bryant’s speaker is going into the next year with hope in his heart that things are going to work out just as well this year as they did in the past.

In Memory of Major Robert Gregory by William Butler Yeats

This poem is an elegy or a devotional piece of writing completed after someone’s death. In this case, it is for Major Robert Gregory. He was the son of one of Yeats’ closest friends, Lady Augusta Gregory. He was an airman who died in a battle in World War I. The loss of Robert inspired Yeats to consider other losses he suffered throughout his life.

The majority of the poem is dedicated to Yeats’ opinions about the young man. He was an all-around exceptional person. He tells the reader that Gregory was a terrific horseman who often competed jumps and races others deemed impossible. By the end of the poem, Yeats explains that he wanted to speak more completely about the lives of a number of his friends. But the thought of Gregory took the speech from his heart.