Written from a variety of perspectives, the poems on this list depict the experiences of those who were lost during the Holocaust and those who survived. The poems touch on themes of guilt, fear, hope, and memory. 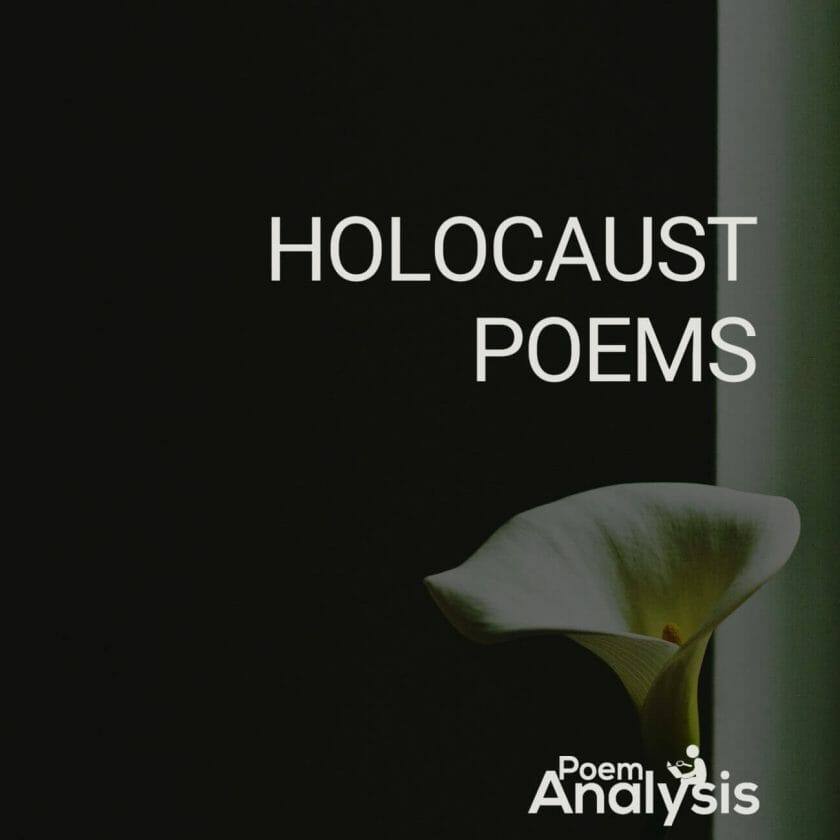 First They Came by Martin Neimöller

In the first poem on this list, ‘First They Came,’ the speaker alludes to themes of guilt, persecution, and responsibility.  This poem was part of a post-war confession made in German by the German Lutheran paster Martin Neimöller. The poem speaks on the cowardice of certain segments of the German population as the Nazis decimated their own country. Neimöller includes himself in this group. In 1937 Neimöller was arrested by the Nazis and sent to Dachau. He was freed in 1945 and became a leading voice for peace after the war. The poem was part of a speech he gave in 1946 at the Confessing Church in Frankfurt.

Titled as Todesfuge’ in German, ‘Death Fugue’ was written in 1945 and published three years later. It is thirty-six lines long and speaks on the camps and the Final Solution. Although Celan was never a prisoner himself, he used the experiences of others to compose this moving, image-rich recollection.

This poem’s background is somewhat confused as there have been multiple claims and assertions of authorships since it was published. Nowadays, it is generally thought that Frye wrote the poem in 1932 prior to the darkest period of the Holocaust but in the midst of growing antisemitism in Germany. The poem was inspired by the light and plight of a young Jewish woman from Germany, Margaret Schwarzkopft who was unable to return to Germany to see her mother before she died.

Never Shall I Forget by Elie Wiesel

in ‘Never Shall I Forget’ Elie Wiesel, the author of Night, uses repetition to describe his experiences of the first night in the camp that changed his life forever. He repeats the refrain “Never shall I forget” seven times in the poem. Each of these times he follows it up with a phrase that strikes at the heart of his experiences during the Holocaust and how it transformed him. One of the most moving lines reads: “Never shall I forget those moments that murdered my God and my soul and turned my dreams to ashes”.

A Poor Christian Looks at the Ghetto by Czeław Miłosz

In this memorable poem by Nobel Prize winner Miłosz, the poet speaks about the state of the Warsaw Ghetto. This ghetto, which was destroyed in an uprising, is depicted with natural images that allowed to a dark and complex history. The speaker describes collapsed walls and roofs that fell into “flame and heat” as well as what remains, “one leafless tree”. One of the best images of the piece comes in the third stanza when the poet describes the progress of the “guardian mole”. He moves through the landscape, touching and counting the bodies.

The Survivor by Primo Levi

Primo Levi is best known for his collection of short stories, The Periodic Table in which he delves into his experiences within the concentration camps and how he feels having survived while so many others did not. The speaker in the poem looks into the past and sees his “companions’ faces”. They are darkened by uneasy sleep and the fear of death. He expresses deep guilt over his own survival and desire for lost who were lost to find peace and no longer haunt him.

The Butterfly by Pavel Friedmann

This poem was written by the poet at the Theresienstadt concentration camp. The poet later died in Auschwitz. In the text, he describes the “last” butterfly and its movements through the air. It becomes a powerful symbol of life, freedom, and hope. The yellow of its wings is juxtaposed against the darkness of the tone and the surrounding context. In the last line, the poet concludes with the haunting phrase “There are no butterflies, here, in the ghetto”.

One of the lesser-known poems on this list, ‘Fear’ was Witten by Eva Picková, a twelve-year-old girl from Nymburk. She was deported to a Nazi concentration camp in 1942 and died in Auschwitz just over a year later. The poem’s four stanzas speak of death, fear, family, and contain a plea to God to save them. She asks that her friends, her family, her people be allowed to work for a better world and not “die”.

‘September Song’ is a haunting poem that alludes to the death of a young child, whose birth and death dates begin the poem. Hill, an Englishman, wrote the poem in the form of a sonnet. But, it does not contain a rhyme theme or metrical pattern. He fills it with images of marching, military might, memory, and in the end, natural images that drift off. The lines hint at the difficulty the speaker, or even the poet, may have had at talking about the Holocaust and all the events which transpired around it.