10 of the Best Poems about Houses and Home

While not always warm and comforting, images of home are universal. On this list, you will find ten of the best poems that delve into themes of youth, family, safety/security, and separation. Each poet, from Christina Rossetti to Robert Browning, has their own take on what home is and can be. 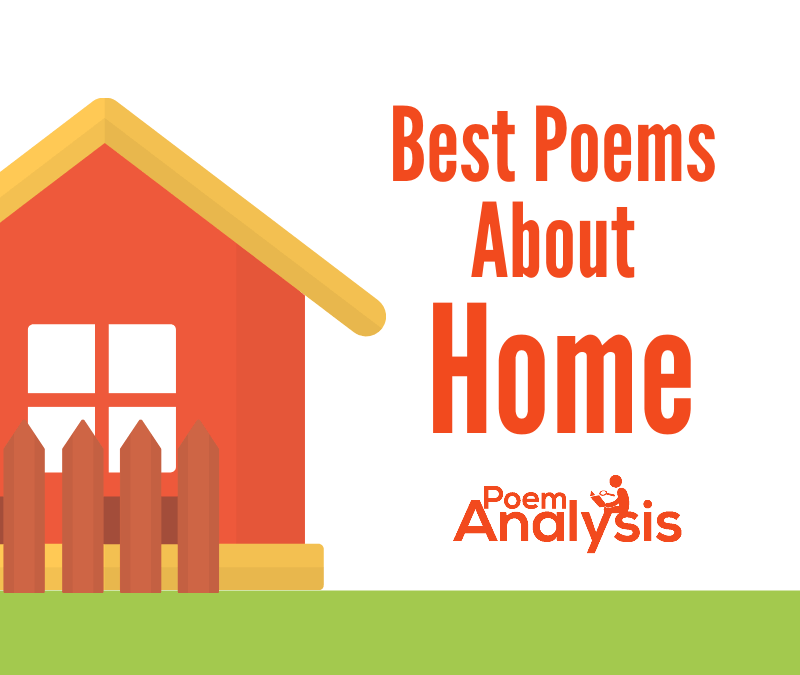 Home is So Sad by Philip Larkin

A short and moving poem, ‘Home is So Sad,’ was composed while Larkin was at his mother’s home. In the first lines he expresses clearly and poignantly the themes of solitude, homesickness, and loneliness. The home is personified as though it is itself able to miss those who have left. It “withers so”. A series of images follow that work as snapshots of a home that does not have all of its residents. There are “the pictures and the cutlery” and finally, “That vase”.

At Home by Christina Rossetti

In this poem, Rossetti’s speaker describes the plight of a ghost who is kept separate from her home and friends by death. The speaker, who is deceased, depicts her own death and what it was like when she first realized what had happened to her. She went home as soon as she could and watched as her friends carried on with their lives without her. She’s stuck where she is unable to return to those she loves. The speaker can’t leave her home or become more than “yesterday” to those who lost her.

A Child’s Garden by Rudyard Kipling

In contrast to ‘At Home,’ ‘A Child’s Garden’ is much more optimistic. It is written from the perspective of a young boy, who is dreaming of escaping his life. He’s critically ill, with tuberculosis, and has to stay within the confines of his home. He spends most of his time in the garden laying outside but far away from the noise of cars and other lives. The confining space is suffocating but that doesn’t stop him from dreaming. He knows that one day he will rise up over the walls of his garden prison.

In this poem Gilman taps into some of the themes for which she is best known. The text describes the day to day life of a housewife and the circular, unchanging elements of her morning, afternoon and evening. Gilman’s speaker goes through the different elements of her life, the things that bond her to her home and the things that make her want to leave. She is only allowed to occupy herself with what the family will eat, wear and how she is to lavish the most praise and love that she can.

Odysseus and Telemachus by Joseph Brodsky

‘Odysseus to Telemachus’ by Joseph Brodsky is told from the perspective of the epic hero, Odysseus while he is stranded on Circe’s island. He speaks directly to his son, Telemachus, in the lines of this piece. He tells him about his regrets, such as not being there to see his son grow up and missing the comforts of home. But, he realizes that it’s very unlikely that he’ll ever see his son or his homeland again.

In this piece Stevens creates a very poignant atmosphere. Wallace describes a reader who is leaning over a book on a calm summer night. This person is seeking something from the text, a kind of perfect truth they have not been able to find elsewhere. The quiet nature of the scene is very important to the poem, without it, the “truth” he is looking for is impossible to find.

In this poem Thomas’s speaker describes home, the relief of arriving there and the connections he feels. The natural world around his home brings him peace and comfort. The relish with which the speaker describes his location allows the reader to understand how important this place is to him. It’s such a special place that the world outside it feels and looks different when he’s there.

The speaker of ‘Home Thoughts From Abroad’ is a traveller. He has been away from home, England, for a long time and is longing to return there. There are several images of nature in the first lines which are used to describe the emotional connection the speaker has to the place he’s longing for. Despite this longing for his home there’s no way for him to get there.

Brontë creates a warm and sunny atmosphere at the beginning of ‘Home’ that symbolizes the warmth that one gains when they are wherever they consider home. This changes into the howling wind and cold weather that is just as welcome. When one is “home” everything is wrapped in that idea. Although she is relishing in the idea of home, she is not present there. She asks to be returned to “that little spot” she remembers.