10 of the Best Poems about Hope

The beautiful poems on this list approach hope, and its related themes, optimism, light, and peace, in different ways and from a variety of backgrounds.

In the case of Seth’s poem ‘Soon’ the poet speaks on illness, and the consequences of losing/not maintaining hope, while in Tennyson’s ‘If I were loved, as I desire to be,’ the speaker discusses ideal love and the power it has over evil. Dig deeper into some of the best poems ever written. 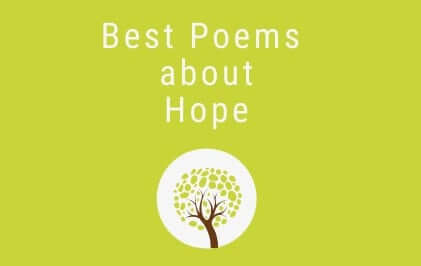 Hope is the thing with feathers  by Emily Dickinson

This is perhaps Dickinson’s best-known, and most loved poem. It is much lighter than the majority of her works and focuses on the personification of hope. It is a bird that perches inside her soul and sings. The bird asks for nothing. It is at peace, and is, therefore, able to impart the same hope and peace to the speaker. She can depend on it, and take pleasure from it. The text is also a prime example of the way that Dickinson used nature as a metaphor for the most complicated of human emotions.

‘Work without Hope’ describes the way that nature works and the importance of having a goal to direct one’s life. Samuel Taylor Coleridge’s main character begins the poem somewhere out in nature. There is all manner of life around him, including bees, birds, and plants. He takes note of how numerous the forms of life are, and how they are all working towards independent goals. The birds sing and the bees make honey. He is the sole “unbusy” element in this forest.

As the poem progresses he comes to terms with the fact that he is contributing nothing to his own life and his simple presence in the world is not enough. The speaker realizes that he is standing by, unhelpful. The flowers will not bloom simply because he is there. It is this lack of direction, and goalless outlook on life, that is dragging him down, mentally and emotionally. He has no hopes to work towards, nor any real object to set his mind on.

I, Too, Sing America by Langston Hughes

‘I, Too, Sing America’ is a short poem in which the speaker acknowledges his different skin colour but asserts that he too “sings America”. Through the text, the speaker thinks about the ways he is treated differently, such as being sent to the kitchen to eat when there’s company. The speaker also presents a vision of the future when he’s not going to be sent away and treated as though he is a slave in a white home. He has an American identity that is equal to that of his white counterparts. The speaker knows that one day everyone else will see that this is the case and be ashamed of their previous behaviour.

If I were loved, as I desire to be by Alfred Lord Tennyson

If I were loved, as I desire to be’ is a sonnet that describes the power love has to surmount evil. After an initial period of complaint in regard to how others treat him, the speaker states that he wants to be loved by one particular person. If he can accomplish that, then the evils of the world will be unable to reach him.

Love would provide him with an indestructible hope that would rise past any depression or darkness. The poem concludes with the speaker describing how even if the world was to come to an end, and alone with her he faced his death, he would not be afraid.

Flying Inside Your Own Body by Margaret Atwood

Throughout this piece, Margaret Atwood uses the images of the lungs and breath to speak on freedom and joy. Inside of one’s body, she depicts it as a beautiful and adventurous place. When you breathe in, you fill yourself with helium and are imbued, like a bird, with the ability to fly. The sun touches your skin and there are no restraints on how far or high you can go. But she adds, it is only in dreams this can happen. When a dreamer wakes up, their heart is “a shaken fist” and the dust in the air clogs their breath.

And There Was a Great Calm  by Thomas Hardy

This poem is one of Hardy’s best-known. It describes the horrors of World War II and the “Great Calm” which came on November 11th, 1918. In the first lines, he speaks on the years of emotion and how they impacted the peoples of the world. Those fighting, and those at home were all changed by it. The men on the battlefields truly suffered, so much so that when the war is declared over, no one can quite believe it. The “calm” at the end of the war brings with it some hope but at the same time a silence that everyone is going to need to fill as they try to go back to their lives.

The Song of Wandering Aengus  by William Butler Yeats

This piece stems from stories based on Celtic mythology and tells one part of the life of the main character, Aengus. It details Aengus’ quest to find a girl he once saw in his youth. He meditates on one moment in his past which has defined all the years he has lived since. It was a normal day, but then everything changed. He pulled a silver trout from the river and it turned into a “glittering girl.” Before he could act, she disappeared into the forest. From that moment, his life has been entirely devoted to finding this woman. While in parts sorrowful, the speaker in ‘The Song of Wandering Aengus’ has not given up hope. He knows a wonderful future awaits him if he could only find her.

In this piece the speaker address themes of equality and discrimination. Through the use of metaphors and the striking refrain, “equality and I will be free” Maya Angelou emphasizes a universal longing for equality. The speaker asks the listener to stop covering their ears and their eyes and see clearly that the speaker, and all those like her, have been crying, asking for change. Eventually, the repetition of the refrain takes on the rhythm of a heartbeat or drumbeat. It is pounding over and over again, driving the speaker forward as she seeks out equal freedoms.

‘September 1, 1939’ was written by W.H. Auden as WWII was beginning. It was published in 1939 in The New Republic, then later in Auden’s collection Another Time. It was intentionally structured to mimic the format used by Yeats in his famous poem ‘Easter, 1916’. Just like Yeats’ work, Auden discusses an important historical event. The first parts of the poem speak about the failures playing out on the world stage, and the second alludes to something more hopeful in the future.

This poem is a moving seven stanza piece that is told from the perceptive of a man dying of AIDS. The speaker discusses the impending nature of his death and how its cause, “This thing” in his blood, will not let him go. His illness controls his body and “breaks [his] days in pain”. The speaker tells of the one he loves, and how this person knows the speaker is going to die and won’t “speak of hope or cure” as it would do him no good.

By the end of the poem, the speaker’s emotions get the best of him and he asks his lover to stay with him, and to “Love [him] when [he] is dead”. In the final line, his facade of acceptance falls away and in desperation, the speaker asks someone, anyone, to keep him from dying.