10 of the Best Poems about Horses

On this list, there are examples of poets who sought to express their love for horses throughout poetry, or in speaking about horses, explored other themes such as death or family. Explore more of the best poems ever written with our Top Ten Series. 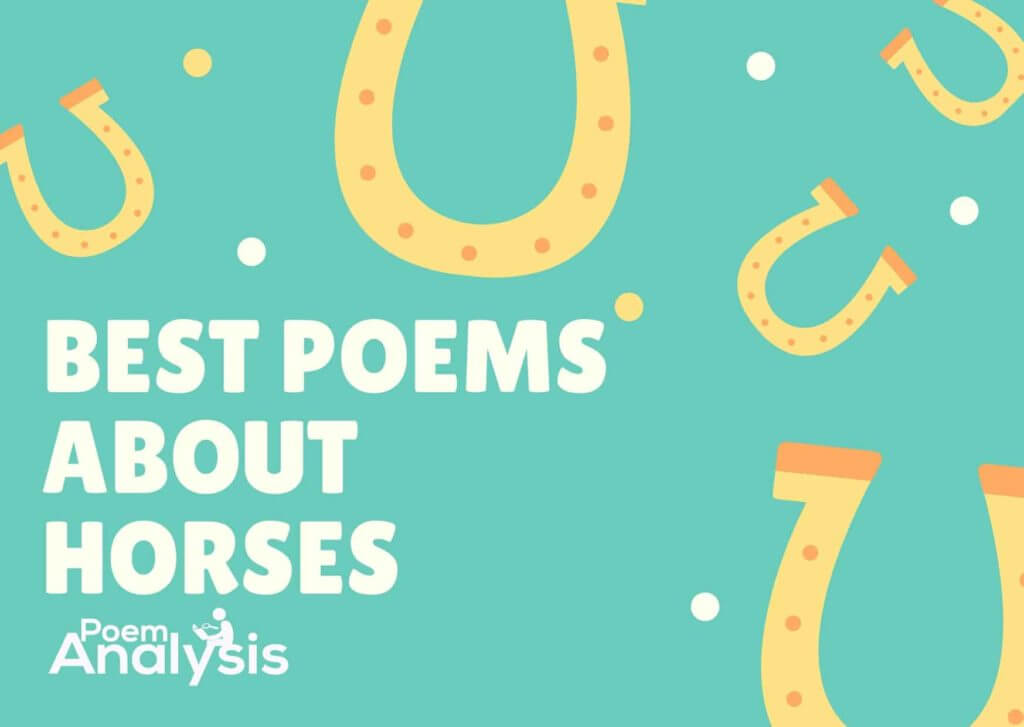 Horses and Men in Rain by Carl Sandburg

With the musical repetition of the phrase “Let us sit” Sandberg speaks on collects images of mundane life. They are made beautiful through his use of language and the way in which he’s able to collect each. He wants to draw the reader’s attention to the “golden days,” and “all the olden golden men who rode horses in the rain”. The horses are part of an image of the past that, in this moment at least, Sandburg wants to celebrate.

Boot and Saddle by Robert Browning

In ‘Boot and Saddle’ Browning uses repetition, and even a marked chorus, to describe the progress of character riding on horseback. He repeats the phrase “Boot, saddle, to the horse, and away!” several times in the poem, emphasizing this call to action. Each line is full of power and purpose as the speaker describes charing off to “Rescue my Castle” before the sun is fully risen. He travels through the suburbs, speaks of friends cheering him on, and then discusses the impossibility of surrendering.

The White Horse by D.H. Lawrence

‘The White Horse’ by D.H. Lawrence s a very short four-line poem that depicts a youth and a white horse. In the four lines, the young man walk-up to the horse and puts “its / halter on”. The horse does nothing but stares at the boy “in silence”. The entire poem has a quiet contemplation about it that encourages a reader to dig deeper into each line and the complexities of animal/human relationships. The two, Lawrence concludes, are so silent they are “in another world”

The Undertaker’s Horse by Rudyard Kipling

Written in1885, ‘The Undertaker’s Horse’ speaks on themes of death through the image of a horse. This particular horse belongs to the undertaker and is in charge of ferrying dead bodies. The horse walks “hideously suggestive…professional and placid”. The speaker addresses the horse, considering its power, its job, and the way that time will eventually come for it as well despite its placid and professional movements. While speaking about death in general, Kipling can’t avoid discussing his own death and that of the reader’s as well.

The Highwayman by Alfred Noyes

‘The Highwayman’ is a very popular narrative poem that was first published in August of 1906.  The poem tells the story of a highwayman, romantic in profession and belief, who falls in love with a landlord’s daughter named Bess. Their story is not a happy one in life, but in death, they are reunited. Throughout the poem, Noyes uses rhyme, rhythm and figurative language to create a compelling story.

The Old Horse in the City by Vachel Lindsay

In this short poem about horses, Lindsay writes from the perspective of a horse longing for freedom. He discusses the setting, the hay that’s been “Heaped up for me to eat” and contrasts moments of peace with those of pain. The men beat the horse until he is “sore” and he determines that one day he’s going to “break the halter-rope / And smash the stable-door” and escape. He will run free and see the hills of corn and the rises sun as he never could before.

At Grass by Philip Larkin

In ‘At Grass,’ Larkin speaks on the fate of two famous racehorses who have long since left the track and found a new home in a pasture. The poem begins with the speaker looking out over a field and noting how “they” are almost impossible to see at first. At one point the horses were the centre of everyone’s attention, now they are are only seen by the speaker. And even then, he sometimes finds it hard to spot them.

He thinks on their past lives at the track and wonders if the memories of fame and acclaim haunt the horses. The horses no longer work for the crowd, nor are they overwhelmed with these sights and sounds of the track. He comes to the conclusion that the two once-famous horses are much happier to have escaped their names. Whatever achievements may have been their’s have been “almanacked” and packed away for others to worry about.

The Horse Poisoner by Thomas Lux

A darker poem, ‘The Horse Poisoner’ tells the story a reader might expect from the title. It begins with the mystery of the dying horses “two from two farms over” and a variety of others from the area. There should be, some people thought, a connection between all the horse deaths. The poem ends mysteriously and compellingly.

Why Some Girls Love Horses by Paisley Rekdal

A lesser-known poem than some on this list, ‘Why Some Girls Love Horses’ speaks on themes of childhood and coming of age. The poem also delves into relationships between children and animals. It expresses a speaker’s admiration for a horse that was “smarter than most of the children” the child when to school with. The speaker ages as the poem progress and they learn to love the horse for its own freedom and how it is a slave to no one.

On the Horse and His Rider by John Bunyan

In this poem Bunyan depicts both horse and rider, contrasting one with the other. The speaker goes into the differences between riders and the horses they ride. There are some who “go as if they did not greatly care” or go “their way without a check”. It is all about riders learning horses and their different personalities as well as seeing how men ride horses and learning theirs.