10 of the Best John Betjeman Poems

John Betjeman was born in London England in August of 1906. He is best known for his writings on contemporary English life, often told with a humorous or satirical bent. His first book of verse Mount Zion was published in 1933, along with his first book on architecture. Between ’33 and ’58 he published four more volumes before gathering his works in Collected Poems. John Betjeman was knighted in 1969 and became Britain’s poet laureate, succeeding C.Day-Lewis in 1972. 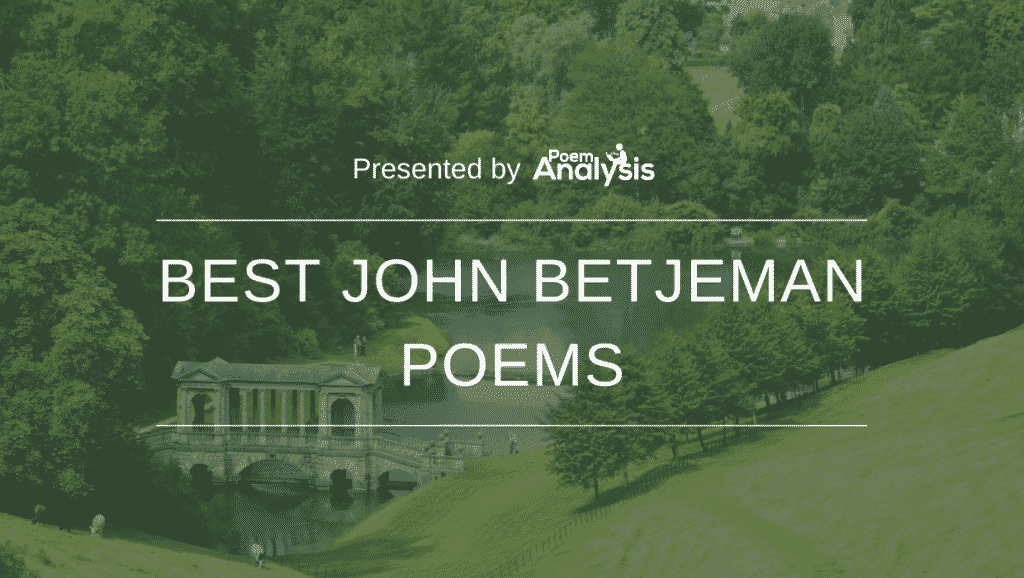 The Arrest of Oscar Wilde at the Cadogan Hotel

This piece is one of John Betjeman’s best-known. It describes the moments before the arrest of the poet Oscar Wilde, and of the surrounding details of his hotel room. There is a fantastic amount of information in this piece and for a lover of Wilde’s work, it is a joy to read. Betjeman includes Wilde’s close friend Robbie Ross in the poem, and even alludes the infamous “Yellow Book” mentioned in The Picture of Dorian Gray. The poem is relatively simple if one does not investigate these details. It depicts Wilde’s knowledge that something is about to happen, and it soon does. Two policemen comes into the room and declare their intention of arresting Wilde. He is taken, without fuss, down to the hansom. There is no gentle conclusion to the poem, the reader is left to wonder, or mourn, over Wilde’s fate.

This is a humorous poem that pokes fun at rich children who do poorly in an equestrian competition. The main speaker of the poem is a young girl who spends most of the poem trying to make herself look knowledgeable, while also critiquing the other rider’s technique. A Hunter Trial is a competition to test the horse and rider’s ability to navigate a course at a “hunting pace”. When it is finally her turn to go, she too does poorly. As one might expect, she blames her horse. The ridiculous way she addresses her broken collarbone is one of the highlights of the eight stanza poem.

Change, in combination with nostalgia, form the basis of ‘The Village Inn’.  The speaker of this piece describing his beliefs about the numerous changes made to an English landmark, the inn. The poem begins with the speaker replying the words of a Public Relations Officer who is trying to sell the public on the new changes made to a specific inn. Although John Betjeman’s speaker has been split on his opinion on inns, by the end of the poem he has definitely decided he doesn’t like the changes which were made. The history has been lost and replaced by hygienic decorations and meaningless signs and designs.

This is perhaps John Betjeman’s most famous poem. It is humorous, upbeat and tells of the real life love the poet had for Miss Joan Hunter Dunn. The narrative in this piece is relatively straight forward. The poem begins with the speaker exclaiming over how much he cares for Dunn. At this point, they’re playing tennis. Their wealth is quickly revealed and lightly mocked as the two prepare for a dance. The speaker clearly adores this woman, who is very much above him in the social hierarchy. Rather than go into the dance, the two remain in their car and he confesses his love to her. This leads, the poem says, to their engagement. These events are a retelling of history. In reality, the two were never engaged and did not end up together.

This poem is a lyrical portrait of the small village of Lambourne in West Berkshire, England. John Betjeman’s speaker is walking through the village at the beginning of the poem. There are different types of trees and the shadows move frequently. One particular shadow is cast on an unknown grave. It belonged to someone who was from the area, and likely trained horses. The rest of the details are unclear. There is great deal of nostalgia in these lines. The speaker is tapping into the area’s history and taking note of how things used to be and how much they’ve changed.

‘Executive’ is told from the perspective of a young business leader who can’t stop bragging about his financial success. While the tone of the poem is boisterous and braggadocios, John Betjeman’s mood when he wrote it was mocking. He was looking down on this person and trying to draw attention, through the clearly stereotypical lines, to the absurdity of living this sort of business and money focused life. By the end of the poem the business man’s sources of income are revealed to be very backdoor and possibly illegal.

The word “senex” refers to an archetypal man. In this particular, slightly unnerving poem the main character is obsessed with “flesh” and unaware of the social cues around him or how he is perceived. The man is driven to the point of insanity over groups of young women he sees but can’t have. While he loves them, he also hates them. At the same time that he pursues them, he asks God to rid him of his desire. The poem concludes with the speaker wishing that the “flaxen” hair of those he lusts after would become dust in his mind. He sees this as the only way he’s going to be able to forget about the girls playing tennis, biking and walking.

The first lines of ‘Slough’ are some of John Betjeman’s best-known. They read. “Come friendly bombs and fall on Slough! / It isn’t fit for humans now, / There isn’t grass to graze a cow. / Swarm over, Death!” The poem focuses on the poet’s intense dislike for the city of Slough. It was famously used as a dumpsite for war surplus and then as a site for hundred of factories before WWII. The speaker explicitly asked in the first lines, and a few other times, for bombs to fall and destroy the city. He wants it blown to “smithereens”.

This piece is another satirical poem, written in the style of a dramatic monologue, which pokes fun at a certain class of person. In this case, the poem is told from the perspective of a woman going to Westminster Abbey to pray during WWII. There is an interesting contrast in the text as the somber occasion and the larger setting allude to a darker tone, but that soon changes. It becomes clear that the woman has no one’s needs in mind aside from her own. Her selfishness in the face of the horrors of World War II becomes the main focus of the poem.

‘Christmas’ describes the traditions of Christmas time and how they compare to the story of the birth of Christ. The poem begins with the speaker describing the lead up to Christmas. The setting feels warm, cozy and familiar. This is emphasized by the calm and peaceful tone the speaker takes. Time progresses, and the speaker moves on to examine the village the church is in. There are a number of buildings which are also decorated with “paper” and buntings that read “Merry Christmas to you all”. These decorations are quaint, at least compared to the ones in London he sees in the net lines.

The most important parts of the poem are the last few stanzas. Betjeman’s speaker compares the things that people do on Christmas, such as giving bad gifts and spending time with family to what he thinks really matters.