10 of the Best John Donne Poems

John Donne was born in London in January of 1572. His work is remembered for its emotional intensity and the ways he played with sex and faith through the metaphysical conceit. It was not until the early 20th century that his work was fully popularized. In fact, his poems were not printed until two years after his death, in 1633.

Donne is remembered today as the most important metaphysical poet of his day and one of the greatest writers of English prose. 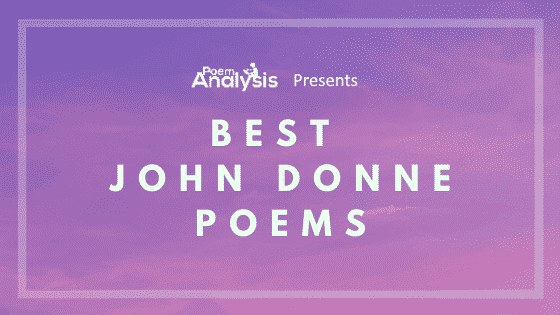 A Nocturnal Upon St. Lucy’s Day

This poem describes a speaker’s depressed state following the death of the woman he loved. John Donne is generally considered to be the speaker in ‘A Nocturnal upon St. Lucy’s Day.’ But the context is not entirely clear. Donne suffered a number of losses in his life, including the death of his wife, Anne. It is not certain, but the woman to whom he refers in the text could be her. This influences the overall tone of the poem as the speaker mourns for his lover, but also speaks clearly and beautifully.

Most certainly one of John Donne’s best-loved poems, it describes a transcendent love that eventually evolves into the idealized baseline for all other aspiring lovers. The poem begins with the speaker telling a listener that they need to be quiet and let him “love.” He goes on to say that they can do anything but bother him about his love.Through a rant like procession of lines, he describes how his love has not hurt anyone. It has not sunk ships, flooded fields, frozen out the spring or given anyone the plague. It is harmless to all except the speaker and his lover for whom it is deeply beneficial.

The speaker sees himself and his lover as the perfect couple, ready to ascend into heaven as saints of “Love.” But, everything will not go smoothly, as is revealed at the end of the poem. There is still some possible unhappiness on the horizon.

Through aggressive language, the speaker in ‘Batter my heart, three person’d God’ asks the Holy Trinity to enter into his body. They can attack him if they need to. Through this forced entry he compares himself to a captured town, but everything is not quite so simple. It turns out the speaker’s controlling inner-self is unwilling to let his guard down sufficiently for God to enter fully. There are other problems as well, he has a connection to God’s “enemy”.

This is certainly Donne’s most well-known and studied poem. It was written by John Donne for his wife Anne, in either 1611 or 1612, before he left on a trip to Europe. It was not published until after his death, appearing in the collection Songs and Sonnets.

As the poem goes on, the most important image, and basis for a brilliant conceit, is that of a compass. It appears towards the end of the text, in line 26. It symbolizes the strength of their relationship, but also the balance that exists between the speaker and his wife.

Donne describes the compass as being “stiff” with a “fixed foot,” this is his wife’s part of the metaphor. She remains stationary while her husband, the speaker, “roam[s]” around. It is due to her steadfastness that he always finds his way back home. The speaker clearly sees this conceit, or comparison between two very unlike things, as a romantic. One should take note of the fact that the speaker’s loyalty to his wife seems to hinge on her placidity. If she were to “roam” the entire balance would be thrown off.

This piece is one of the longest on the list at nineteen stanzas. The speaker tells the listener that he and his lover are sitting on a riverbank. It is spring, and they appear to be very much in love. They sit very still, hardly touching one another, but thinking about it. Their pure souls are speaking though, trying to work out what comes next. Although having one’s soul speak to another is a beautiful thing, John Donne’s speaker eventually decides that they need to communicate physically.

Alongside ‘A Valediction Forbidding Mourning’ this poem is one of John Donne’s best-remembered. Through a complex metaphysical conceit the speaker describes being bitten by a flea, that also bit his lover. Their bodies are mixing inside the body of the flea, therefore inspiring the speaker to ask this woman to sleep with him. She kills the flea, and the speaker uses this as proof that there’s no reason they shouldn’t sleep together. Their essences mingled successfully inside the creature, so they will in real life as well.

A Valediction of Weeping

‘Valediction of Weeping’ has a number of characteristics of a metaphysical poem. It is clever, makes use of extended complicated metaphors and investigates important worldly questions.The most prominent of these describes tears in powerful terms. They are spoken of in relation to the “round ball” of the earth and the seas. They are also imbued with a number of powers and features.

Something else familiar in this work is the title. It is not the only poem on this list that utilizes the word “Valediction.” The word “valediction” is used to describe a text bidding farewell to a specific listener. In this case, the poem is addressed to a current lover from whom the speaker is soon to part.

It is thought by some that this piece was written after John Donne’s secret marriage, during a period of separation. His marriage was a topic that came up frequently within his poetry, especially due to the repercussions it had on his career and subsequent short imprisonment in Fleet Prison.

Death, be not proud

This poem is also known as Holy Sonnet number 10 was written in 1633. It is devoted to a personified form of death. Throughout, the speaker uses a metaphor to describe how death is impermanent and, it is not something to fear. It is actually a powerless being that frees human souls rather than destroys them.

Within ‘The Funeral’ a speaker’s wishes for his own funeral are made clear. The poem begins with this speaker asking that whomever eventually comes to buy him after his death leaves his hair bracelet alone. He knows that everyone is going to be curious about it, but no one should touch or even question it. The speaker has important plans regarding the item which are made clear later on. It is this image of the manacle of hair that’s the most important image of the text. It goes through an important transformation in the stanzas.

First, it appears as some sort of bracelet-like reliquary, a remembrance of a pure, much loved woman. As the poem progresses though the speaker’s tone shifts and the reader’s perception of the hair changes until the “wreath” becomes a manacle chaining the speaker to this woman he loved, and therefore, bringing her into the grave with him.

At the round earth’s imagin’d corners, blow

This poem contains speaker’s description of Judgment Day and an appeal to God to forgive him his sins. It begins with the speaker directing angels at the corners of the earth to blow their trumpets and wake the dead. With this action all those who have passed away, in all their “numberless infinites” will return to earth and seek out their bodies.

From the first lines it is clear this is a slightly altered description of the Christian apocalypse. Although John Donne’s speaker seemed prepared for the end of the world in the first section, he changes his mind. He realizes he hasn’t adequately repented for his own sins and begs God to teach him how to do it. If he could, his life would be forgiven and he could join the ranks of the dead.