11 of the Best Langston Hughes Poems

Langston Hughes was born in Joplin, Missouri in February of 1901. His first short stories, plays and poems were published while he was in high school. He spent a brief period at Columbia University before leaving in 1922 due to the racial prejudice amongst the students and teachers. His first collection, The Weary Blues, appeared soon after in 1926. This work won first prize in a literary magazine competition and supplied him with the scholarship he needed to continue his studies. It was followed by Fine Clothes to the Jew in 1927. His first novel, Not Without Laughter, was published in 1929.

In 1940, Langston Hughes published an autobiography about the first part of his life. It was titled The Big Sea. He was also working for the Chicago Defender writing about a comical character he named Jesse B. The decade also saw Hughes contribute lyrics to a Broadway musical and begin teaching creative writing at Atlanta University. At the beginning of 1951, he published ‘Harlem (What happens to a dream deferred?’)”.Langston Hughes died in May of 1967 from complications due to prostate cancer. 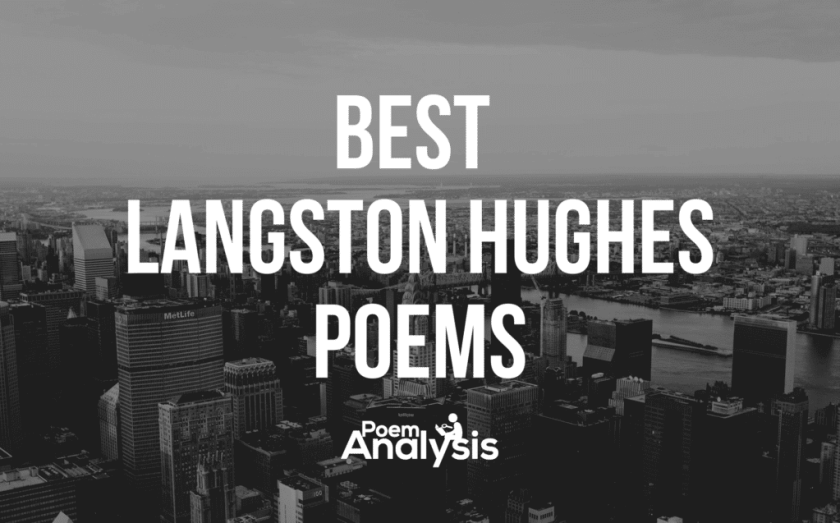 The Negro Speaks of Rivers

‘The Negro Speaks of Rivers’ is commonly cited as Langston Hughes’ most famous poem. He wrote it when he was only seventeen years old. The poem is told from the perspective of a man who has seen the great ages of the world alongside the banks of the most important rivers. The speaker says he knows rivers very well. There are a few, in particular, he wants to share.

The rivers have all played host to some of the most important historical events and civilizations on the planet. The speaker has seen humankind’s first moments alongside the Euphrates, participated in the building of the pyramids and listened to the Mississippi while Abraham Lincoln was sibling down it.

Undoubtedly one of Langston Hughes’ best-known works, ‘Montage of a Dream Deferred’, also commonly known as ‘Harlem’ is a book-length poem. It is made up of a long line of poems that are linked together by an innate musicality. The text speaks about the lives of Harlem residents who are not experiencing the “American Dream”.  Instead, they’re having their dreams deferred. Through a series of questions, one Harlem resident asks what happened to his dreams, and more widely, the dreams of all those like him.

‘Suicide Note’  is one of a number of poems on this list that addresses death and the power it holds over one’s life. It is only three lines and twelve words long but is incredibly moving. The speaker alludes to the beauty of death and how it has enchanted him. With its “Cool face,” it asks the speaker “for a kiss”. It encourages him to lean forward, allow himself to be swallowed by the water and end his life.

This piece was written in 1983 but has over the last ten years experienced a resurgence in popularity as deaths, especially those of the black youths, have surged in coverage by the media. Within the text, the speaker laments the deaths of both white and black children who “die in swamps of Mississippi” and “in the streets of Chicago”. The speaker describes how “All kinds of kids will die”. In a section of particular relevance in today’s political and media environment, Langston Hughes describes how everyone, from the “bribe-reaching police” and “money-loving preachers” will raise their hands “against the kids who die”. “

The poem ends on a more optimistic note as the speaker says that one day, “black hands and white hands” will clasp “as one” and a triumphant song will reach the sky.

I, Too, Sing America

‘I, Too, Sing America’ is a short poem in which the speaker acknowledges his different skin colour but asserts that he too “sings America”. Through the text, the speaker thinks about the ways he is treated differently. This is embodied through his being sent to the kitchen to eat when there’s company. The speaker goes on to presents a vision of the future where he’s not going to be sent away and treated as though he is a slave in a white home. He has an American identity that is equal to those of his white counterparts. The speaker knows that one day everyone else will know this to be true and experience shame over their previous behaviour.

This poem was first published in December of 1922 in the magazine, Crisis. It was also included in Langston Hughes’ collection, The Weary Blues, published four years later. Within the text, Hughes uses the metaphor of a staircase to depict the difficulties and dangers one will face in life. The major themes are determination and wisdom.

The poem contains a mother’s warning to her son about the stairs one is forced to climb throughout life. He must watch out for broken boards, splinters, and tacks, all of which are there to throw him off. Additionally, she explains that although he might get exhausted or desperate, he should never turn around or sit down. She is still trudging up the stairs and he can too.

Theme for English B

The speaker in this text is the only black student in his college English course. Through the structure of an English assignment, he considers the genuine parts of his everyday life and who he is supposed to be in amongst the myriad of influences around him. All at once the speaker wants to fit in with his peers but retain his own cultural heritage.

By the end of the poem, he comes to the conclusion that he should embrace the diversity of American society and hopefully teach his classmates something about himself and the value of different perspectives.

‘Life is Fine’ chronicles a man’s suicidal thoughts and semi-attempts to take his own life.  He jumps into a river, but because its so cold, he’s unable to stay in the water. Then, he travels to the sixteenth floor of a building and immediately changes his mind about jumping off. The man decides that because he’s made it this far, he might as well continue his life. He won’t let the one he loves see him die.

Similarly to a few other poems on this list, Langston Hughes’ ‘Let America Be America Again’ focuses on the American dream. In this case, though, the speaker is considering whether or not it actually exists. He believes that the idea, which was a grand one, is no longer present in society (or perhaps it never was). The speaker still thinks it’s possible for the dream to come back. At this particular moment though, the exploitative qualities of American society have to be addressed.

It is thought that this piece was inspired by a train journey through Depression-era America in the mid-1930s. The poem was later published in Esquire magazine.

‘Still Here’ is one of the shorter poems on this list. The poem speaks on themes common to Hughes’ work. They include resistance and determination in the face of suffering and seemingly insurmountable odds. The speaker discusses the darkest moments of his life and how at times he felt “battered” and “scarred”. By the end of the poem, the speaker says that despite these struggles he has come out the other side a stronger person. The perseverance was worth the effort.

One of the most striking aspects of this piece a reader will notice is the myriad grammatical errors. This was done in order to make the reader question what language is. Then, what it can be and who gets to decide.

‘Dreams’ is a moving two stanza poem that is in total only eight lines long. It is relatively straightforward, speaking directly to human dreams and their fragility. Hughes states that one must “Hold fast” to their dreams, because if one doesn’t, then the dream might be lost. He adds that without dreams life is “a broken-winged bird / That cannot fly”. Additionally, one’s life will be “a barren field / Frozen with snow”.