10 of the Best Poems about Life

Whether delving deep into the darker parts of their lives or relishing the happiest of times, the poets on this list explore the universal human experiences that unite us all. The ten poems on this list are only the tip of the various ways writers express emotional states, positive or negative, and relay life experiences. Dig deeper into some of the best poems ever written in our Top Ten Series. 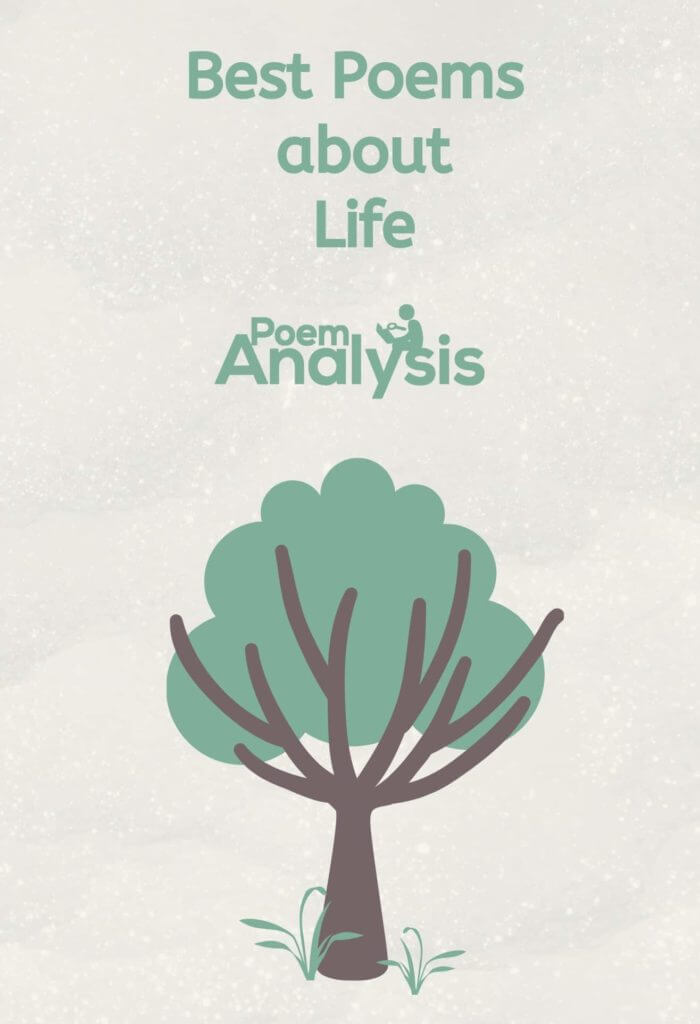 ‘If’ is perhaps Kipling’s most famous poem. It is inspired by nature and gives a reader advice on how to live their life. There are a number of examples in the text of adverse conditions one might come across, and how it is best to surmount them. Anything can upset one’s life, and it is necessary to be prepared for when that happens. The “If” portion of the poem is complemented by the “then” portion. Every scenario is followed by a solution. If a reader does as the speaker has suggested, he declares that they will be set to conquer the world and become a “Man”.

The first poem on this list includes some of the major themes within Plath’s works, solitude and death, as seen through the use of natural images. The poem takes place in a cemetery in the month of November. It discusses how there is really nothing present in the land beyond the physical. It is winter, therefore all the plants are dying, but not willingly.

They cling desperately and uselessly to their foliage. Just as the plants attempt to maintain life into the winter, so too does humanity seek something after death. The speaker goes on to say that there is nothing magical about the cemetery, in fact, it is just a physical location, without any attachment to those bodies within its grounds.

Do not go gentle into that good night by Dylan Thomas

Undoubtedly Thomas’ best-known work, ‘Do not Go Gentle Into That Good Night’  was first published in 1951. Thomas wrote the poem after his father’s death and used it as an opportunity to address the universality of death and encourage the reader to remain strong until the end. The poem opens with its famous lines, “Do not go gentle into that good night, / Old age should burn and rave at close of day.” Through powerful and skillfully composed language, Thomas encourages his father, and the larger population, to realize the importance of their own lives, by fighting back against the dark.

This poem was published in 1993 and is about addressing one’s fears head-on, understanding them, and then keeping them at a distance so that they do not control one’s life. The poem is written from the perspective of a child, contains a lot of figurative language and a simple rhyme scheme.

This poem tells of the two toads, or pressures, that exist within a speaker as he struggles to free himself from everyday life. Larkin’s speaker states that there is one thing that plagues him more than anything else, a toad. This toad, represents work, exterior obligations and financial pressures. It is always there, forcing poison into his life. Perhaps, he wonders, he’d be happier if he were poor. He speaker looks at the poor people around him and thinks they look happy enough, and none of them ever seem to starve. Eventually, and thankfully, he comes to the conclusion that he doesn’t have the guts to give up his comfortable life.

It seems that death was a theme that Dickinson could not get away from. Within this poem she again touches on it and depicts it as something that is in the end, desirable. The speaker moves through the things that a human being wants most in their life. The first, is an active pleasure. But for some, this is impossible. Next on her list is an escape from pain. If life could progress without trauma, that would be enough. Lastly, there are sleep and death. It is better to die, the speaker implies than to live a life of suffering, devoid of pleasure or peace.

This is perhaps John Betjeman’s most famous poem. It is humorous, upbeat and tells of the real-life love the poet had for Miss Joan Hunter Dunn. The narrative in this piece is relatively straight forward. The poem begins with the speaker exclaiming over how much he cares for Dunn. At this point, they’re playing tennis. Their wealth is quickly revealed and lightly mocked as the two prepare for a dance. The speaker clearly adores this woman, who is very much above him in the social hierarchy. Rather than go into the dance, the two remain in their car and he confesses his love to her. This leads, the poem says, to their engagement. These events are a retelling of history. In reality, the two were never engaged and did not end up together.

To Earthward  by Robert Frost

This is a poem that describes a speaker’s connection to his own emotions and eventual desire to draw closer to the strength of the earth. The speaker’s youth was a powerful influence on him. It was so sweet that it was almost too much for him to handle. Since he has grown older his desires have changed. Now, he is looking for pain in his life, rather than pleasure. This strange decision make sense by the end of the poem. He is seeking to feel something real, to turn “earthward” and know the full range of his emotions.

When I am dead, my dearest by Christina Rossetti

Within this piece the speaker, who is addressing her lover, tells them to “Sing no sad songs for” her. She doesn’t want him to fret over her because she is going to be dead, and won’t know the difference. Rather, he should go about his life, remembering or forgetting her. She’s fine with whatever he ends up doing in the world of the living, as she may or may not remember him once she’s dead.

The Convergence of the Twain  by Thomas Hardy

‘The Convergence of the Twain’ describes the power of “Immanent Will” in regard to the destiny of the Titanic and the iceberg.  It has the ability to decide on future convergences, or more simply, it controls all coming events. The force decided to “twin” the iceberg and the ship, therefore, when they met, it had already been predetermined.

Within this piece, the sea symbolizes another world, one that is impossible for humankind to fully understand. There is an inherent mystery to its impenetrable depths. Additionally, the speaker emphasizes the solitude which one is forced into while in or on the sea. There is no one else to speak or fight with, instead, one is forced to contend with their own consciousness.