10 of the Best Poems about Light

On this list, you will find poems that look at light as something powerful, peaceful, and heavenly. The various featured poets, from Emily Dickinson to John Milton all feature light and darkness differently and memorably in their work, taping into secondary themes of sleep, God, suffering, and happiness. 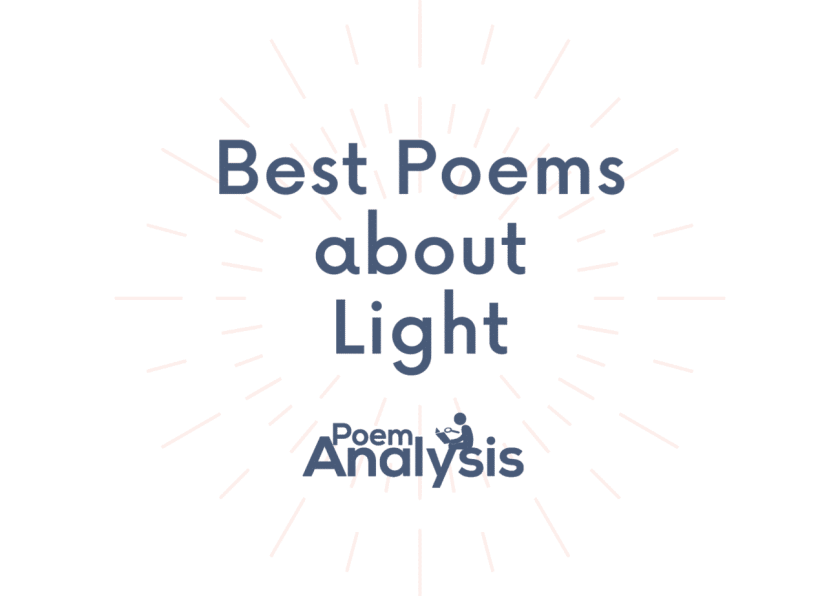 On His Blindness by John Milton

Also known as ‘Sonnet 19,’ and ‘When I consider how my light is spent’ is John Milton’s best-known sonnet. The poem explores the poet’s newfound blindness that struck late in life. He is faced with the future and how he’s going to overcome his disability and still maintain his writing and serve God. In the second half of the poem, the sonnet turns and the poet receives an answer to his desperate queries.

In this poem, Neruda focuses on the theme of change and the consequences that come with it. The poet asks the reader to consider their circumstances and find the light in their lives. The first lines of the poem open with light shining from the “top of the sky”. It carries down to the leaves and drifts through the air like “clean white sand”. Although this poem is short, it is quite beautiful and packed full of peaceful moments of contemplation. It ends with the phrase “the world is a glass overflowing with water”.

The Light of the House by Louise Imogen Guiney

‘The Light of the House’ describes the overwhelmingly positive impact the memory of a dead man has on the day to day functions of a home. In the first lines the speaker talks to a man that has passed on from this life and returned to it in a new form. The man was most likely her husband, and now that he has returned, he is able to walk all of his old paths and make her feel as she did while he was still alive. The idea of his continued existence around the speaker is cheering the room, he is the “light of the house” despite his death.

In ‘They are all Gone into the World of Light’ by Henry Vaughan describes a speaker’s longing to understand what death is and where his loved ones have gone. In the first lines the speaker lamenting the fact that he is alone in his life. The only comfort he is able to take is that which exists in the memories of those he lost, they are light in amongst the darkness of the rest of his life. He longs for death to come for him and take him into the next world where he thinks he’s going to find happiness. Death is not something dark to be feared, but a “world of light” he is desiring to take part in.

A World of Light by Elizabeth Jennings

In this poem, Jennings explores lightness and darkness as a means of representing good and evil. The dark is generally seen as the harbinger of negativity, death, and disaster while whiteness and light are seen as representing something good and optimistic. In this poem, Jennings flips these stereotypical associations. In the end, this poem is about learning how to make oneself comfortable with lightness or darkness and making the best of every situation.

Light Breaks Where No Sun Shines by Dylan Thomas

‘Light breaks where no sun shines’ by Dylan Thomas was published in The Listener in 1934. The poem is made up of strings of related, and often seemingly unrelated, imagery that is connected together to depict a certain experience. In this case, the poet has taken images of love, aging, sex, and shed light on them. The pervading image of the “light breaking” through this piece reveals the intimacy of private moments and the less discussed beauties of life.

There’s a certain slant of light by Emily Dickinson

‘There’s a certain Slant of light’ was first published in 1890. It uses many of the traditional elements that readers of Dickinson’s poems will be familiar with. These include seemingly random capitalization and dashes used for emphasis and the separation of specific thoughts. The main themes of this piece are nature and the importance of religion and God in amongst it. Death and loneliness are also present, as is common in Dickinson’s works.

The Light of the Stars by Henry Wadsworth Longfellow

In ‘The Light of the Stars’ Longfellow uses symbolism to explore the light of the stars, the night, and the planets one can see glowing in the sky. These depictions are clear and memorable. The lines are also all quite short, allowing the reader to focus on each image as it arises. The speaker asks a series of questions as the poem continues, engaging the reader with themes of dreams, love, fate, and the future.

This poem was written in the early 1950s but it not published until Rossetti’s volume, Poems: An Offering to Lancashire was released. It describes a speaker’s moments of recollection while he is faced with an emotional scene with someone he loves. He has “been here” (somewhere near the ocean) “before,” he begins the poem. The sights, sounds, and smells of the scene reminded of something he can’t quite place. He comes to the conclusion that he has lived this moment before alongside the intended listener of this piece. After a few more natural images he turns to the listener, his apparent love, and asks them if it’s possible that their love could overcome death.

Lights Out by Edward Thomas

This poem was first published in 1917. It addresses sleep and the otherworldly realms that can be explored in that state. Throughout the poem, Thomas juxtaposes images of light with those of darkness. Such as “dawn’s first crack” with the darkness of sleep. The poem concludes with the speaker considering the path through sleep and losing himself and his way.