10 of the Best Margaret Atwood Poems

Margaret Atwood was born in Ottawa, Ontario, Canada, in 1939. Over her lifetime she has written eighteen books of poetry, eighteen novels, as well as works for children and graphic novels. She has also received more than fifty-five awards. These include the Man Booker Prize for her work, The Blind Assassin and The Testaments, the Arthur C. Clark Award, and PEN Center USA Lifetime Achievement award.

Margaret Atwood‘s most well-known book is The Handmaid’s Tale which has recently enjoyed a resurgence in popularity. It is considered one of the world’s best examples of dystopian fiction ever written. Her first collection of poetry Double Persephone was published in 1961. Others include The Circle Game, Power Politics, In Procedures for Underground, and Morning in the Burned House. Some of her most popular poems include ‘Procedures for Underground’ and ‘Siren Song’. She is considered to be one of Canada’s best living writers. 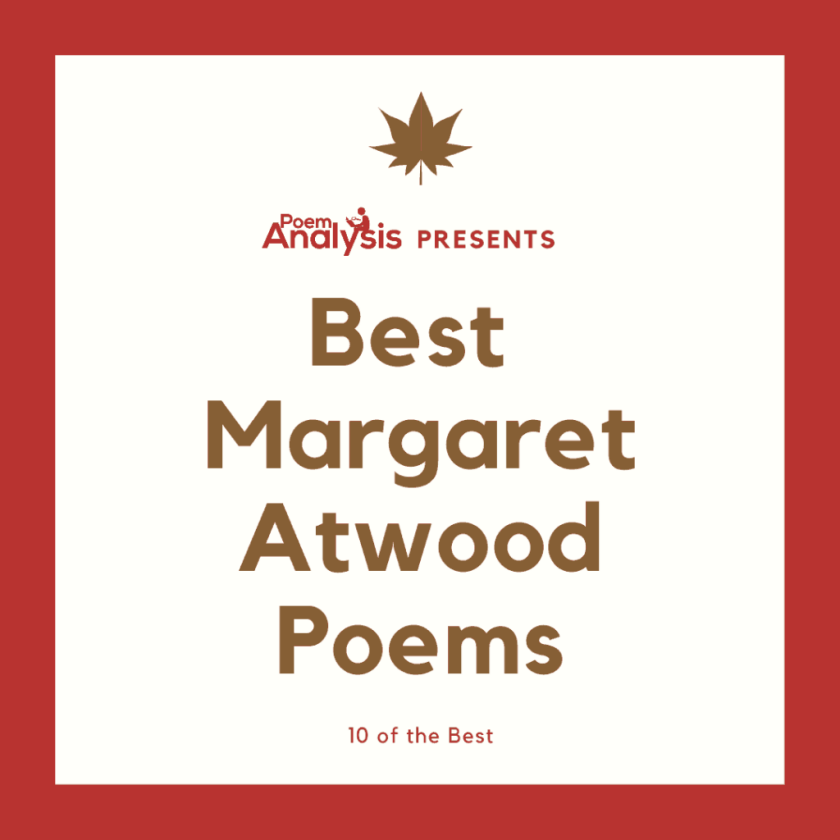 The animals in that country

In ‘The animals in that country’ the speaker describes a world in which animals are judged to have the same worth as human beings. The text speaks about a new place, a “country” in which animals have human faces. It is noted for its lack of distinction between human and non-human animals. Here, the foxes are not hunted, the cats are “ceremonial” and the bulls are allowed to die valiant deaths. All creatures can flourish and reach their highest potential.

In ‘The Moment’ Margaret Atwood speaks on ownership and the way that human beings move through the world. The poem describes the interactions one character, who worked hard to get where they are in life, has with the natural world. They have things they feel they can claim ownership over.

But, things change and the speaker experiences a withdrawal of nature. When they first seemed confident in their world, now nothing is quite right. This is due to the fact that they decided that they own this part of the world. The construction of “ownership” separated them from nature. The third stanza confirms this to be the case and reminds the reader that humans are part of nature, and no one is able to own another being or life form.

This poem is a tender monologue directed at the speaker’s child. She addresses her son or daughter, telling them about hands, eyes, fish, and paper. Atwood uses beautifully simple images such as the mouth as an “O / or a moon,” that step by step, show the world to a child. As the poem progresses the speaker expands the universe. To the child, she states, that “there are more / words than you can ever learn.” By the end of the poem, the speaker brings the poem back around to her child’s hand. It all comes back she says, “to, this your hand.”

In this piece, the speaker describes the short life of a bull who is forced to fight in a ring against human “gods.” The poem begins with the speaker stating that he is looking down at the “wet dust,” listening to the cheering of the “flies,” or spectators, and analyzing the pain in his shoulder. It is clear from the second stanza that the speaker is in fact a bull who has been forced to fight matadors and picadors in a ring. As the poem progresses the bull becomes more confused about why the “gods” act as they do and what he is supposed to do. Sadly, by the end of the poem, he is cut up and given to the victors.

This piece is an untraditional love poem that compares what love is to what it is not. It is not something that one can study and come to a full understanding of. Nor, the speaker adds, is her love for her “doctor” or her “cure”. There is no one, she adds, that has “that power.” There are a number of moments in the text in which Margaret Atwood uses medical language to negate the study of love. Through the poem she wants to make clear that one can’t come to an understanding of what love is through science, it is not definable or wieldable.

‘Crow Song’ is similar to ‘Bull Song’ in that it was written with a specific animal in mind, but in this case, the speaker is talking to the crows. She addresses them, and notes how they “flock and squabble”. Through the next lines, the speaker goes into a deep connection she has with the birds. She feels they are her “people,” but they ignore her. She raises a banner to them, but they have faced “too many stray bullets” and have “gravel, skeptical” eyes. The crows care about their immediate needs of “seed”. In the last lines of the text, the similarities between humans and crows grow more and more pronounced. They have endless wars and too many leaders, as do human beings.

Hesitations Outside the Door

This piece is one of the shortest on the list and is told from a first-person perspective. The speaker discusses the nature of lies, especially when they are told within one’s own mind. She thinks that she has been telling the “wrong” ones as they haven’t been helping her. If she’d lied well, then they would’ve been able to manifest keys and open doors. But, unfortunately, that isn’t the case and she is stuck with the “door…closed”. The speaker emphasizes her solitude in a kitchen space that is on the other side of a door she’d like to open.

This poem is contained within a single stanza and speaks on the nature of life, and how the speaker has been living it. There has been someone in her life who has been controlling her, passively, and directly. From where she is now, the speaker is able to look back on her life and see it for what it is. The experiences which seemed happy, now seem dull and pointless. Her previous boring moments are seen in a new light and she wonders if in the end, these were the times when she was truly happy when no one was in control of her.

Flying Inside Your Own Body

Throughout this piece, Margaret Atwood uses the images of the lungs and breath to speak on freedom and joy. Inside of one’s body, she depicts as a beautiful and adventurous place. When you breathe in, you fill yourself with helium and are imbued, like a bird, with the ability to fly. The sun touches your skin and there are no restraints on how far or high you can go. But she adds, it is only in dreams this can happen. When a dreamer wakes up, their heart is “a shaken fist” and the dust in the air clogs their breath.

Sekhmet, the Lion-headed Goddess of War

In this poem Margaret Atwood is in familiar territory, using myth and legend to construct new narratives. In this case, the speaker is Sekhmet, the Egyptian goddess, daughter of the sun god Ra. Rather than follow the traditional story-line, she depicts the goddess as a warrior queen who is not content to sit in a museum with another god, Osiris. She’d much prefer to escape the crowds of children and go back to the world she used to know.