10 of the Best Nature Poems

Nature is a key theme in a lot of poetry, from the past and present. Such poems discuss and celebrate the beauty and joy nature brings.

Whether it’s from the likes of William Wordsworth, Alfred Lord Tennyson, William Butler Yeats, or Sylvia Plath, the concept of including the theme of nature into poetry brings with it different tones and moods that provide a different perspective to a lot of poetry. Some poets look at the purity and honesty of nature, whilst others look at the destruction mother nature (personified) can cause too.

With this, here are the top ten poems that include the theme of nature surrounding them. 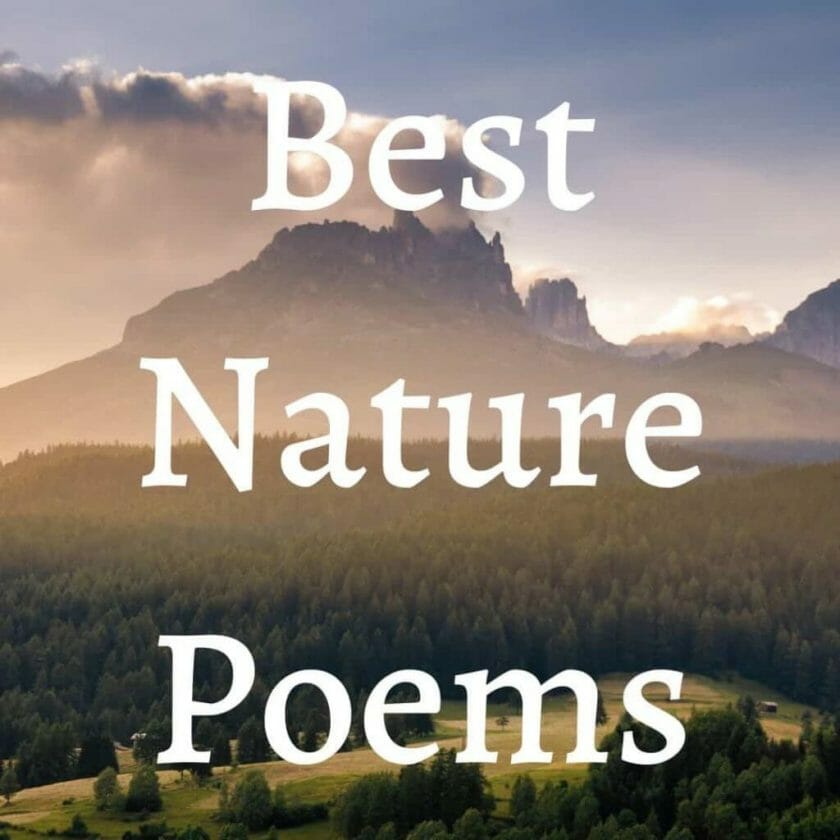 ‘Daffodils’ also known as ‘I Wandered Lonely as a Cloud’ was published by William Wordsworth in 1807. It is commonly considered to be one of, if not the, most famous poem of the Romantic Movement in English literature. Its history is well-known, as Wordsworth described being inspired to write the poem have taking a walk with his sister and seeing a line of daffodils growing freely.

The Eagle by Alfred Lord Tennyson

‘The Eagle’ was published in 1851 is one of Tennyson’s shortest poems. It consists of only six lines. It presents the eagle as a powerful creature, alone and above the rest of the world. The singular focus on the eagle forces a reader to really consider the creature and how it lives its life. While reading this text, one should their own place in the natural world and the relationship they have with all other living creatures.

This piece is likely William Butler Yeats most widely read. It was published in 1890 and takes place in Ireland, in County Sligo and is about an uninhabited island. Yeats spent parts of his childhood not far from this location.  The poem is a perfect example of the “Celtic Revival” style that sought to create a kind of poetry that was entirely Irish in origin, rather than based on the standards of English writers. The poem is in three sections.

The first speaks on the need for the speaker’s physical body. He intends to build a cabin and have a “hive for the honey bee.”  The next section is about his soul and the speaker’s quest for peace. Finally, the last section is about memory. In these lines, he connects the memories of the Isle of Innisfree to his current life. The sensory recollections he has of this place come to him when he’s “on the roadway, or on the pavements grey.” They come up from his “deep heart’s core.” Today, ‘Lake Isle of Innisfree’ is one of the most popular and commonly studied, poems in the English language.

’Lines Composed a few Miles above Tintern Abbey’  is told from the perspective of the writer and tells of the power of Nature to guide one’s life and morality. Wordsworth published the poem in 1798. It begins with the speaker, Wordsworth himself, having returned to a spot on the banks of the river Wye that he has not seen for five long years. This place is very dear to him and is just as beautiful and mystical as it was when he left. The poem has inspired debate, study and adoration for centuries.

Stopping by the Woods on a Snowy Evening by Robert Frost

This is one of Frost’s best-known, and most well-loved, poems. Frost published the poem in 1923. He was in the woods and despairing over his financial state. He did not have the money to provide for his family but chose to continue on rather than give up and walk into the forest. This was a difficult and courageous choice as woods provided an easy escape from the hardships of his life.

‘Winter landscape, with rooks’ describes one speaker’s state of mind through the metaphor of a dark, almost lifeless landscape. The poem was written in 1956, the same year the poet married Ted Hughes. The speaker takes note of how fluidly a river runs through the different parts of a watermill. It goes past all obstacles and enters a dark pond. It is a dreary place, but there is some life there. A swan enters the scene and its purity in that moment strikes the speaker. It is out of place within the narrative, but at the same time makes sense.

Plath moves through the landscape and speaks to her listener, addressing the frozen nature of her heart. The poem speaks to a feeling of confinement and isolation which were on Plath’s mind in a number of other poems on this list.

To Autumn by John Keats

‘To Autumn’ was published in 1820 is a beautiful poem that discusses the fall season and the renewal of life. In the text, he makes use of a variety of images that speak to the fruitfulness of the season and of the “maturing sun.” There are blessings and budding fruits and flowers. By the end of the poem, he speaks on how important autumn is, and what a prime topic it is for poets to explore. There are new images of flying insects and birds. The take to the skies, bringing the reader up along with them. Keats died soon after the poem was completed.

‘Frost at Midnight’ was written in 1798 and discusses the importance of childhood and the developmental years of one’s life. It also speaks about the power of nature and how it influences the ageing process. Particularly, the poem discusses Coleridge’s own childhood. He discusses what it means to grow up in different environments. He was interested in presenting the idea that if one resides within nature, they are also within God.

Huge Vapours Brood above the Clifted Shore by Charlotte Smith

‘Huge Vapours Brood above the Clifted Shore’ describes a brooding storm, the darkness it casts, and the lighted paths of life one might choose to follow. The storm is dense, dark, and “mute.” It has a muffling impact on the surrounding lands and people so that only a few sounds that are able to get through and the loudest comes from the storm itself.

In the second half of the sonnet, the speaker states that there are two lighted paths in the darkness that are visible. The first and second are both dangerous. If one was to follow these lights, they would surely drown. By contrasting these two situations the speaker is able to depict how in darkness one still has the ability to succeed. But, there is also a chance of failure or death.

At the time of her death, Charlotte Smith served as the inspiration for many poets that followed, such as William Wordsworth, Samuel Taylor Coleridge, and Jane Austen.

The Bight by Elizabeth Bishop

This poem describes low tide in a “bight”, or an area of the shoreline that is curved inward. Bishop was inspired to write this text by a bight in Key West, Florida where she was living at the time.

In describing the environment, Bishop takes note of fishermen and many other creatures that create a chaotic but pleasing scene. The speaker describes how low the water in the bight is, and how it is impacting everything else around it. The water feels “sheer”. Animals and humans are both having difficulty navigating the low tide. Pelicans dive at the water like pickaxes, other birds circle above, and fishermen crowd together.