Percy Bysshe Shelley was born in 1792 in Broadbridge Heath, England. While in school Shelley was well known for his liberal views and was once chastised for writing a pamphlet titled, The Necessity of Atheism. Soon after this he eloped with a 16-year-old woman, Harriet Westbrook, of whom he soon tired. It was at this time that Shelley began writing his long form poetry for which he is best known.

Shelley had two children with Harriet but before their second was born he left her for the future author of Frankenstein or The Modern Prometheus, Mary Godwin. Mary became pregnant with her and Shelley’s first child soon after and Harriet sued Shelley for divorce. Soon after this Mary and Percy met Lord Byron, or George Gordon, it was through one of their meetings that Mary was inspired to write Frankenstein.

In 1816 Percy Bysshe Shelley’s first wife Harriet committed suicide and Mary and Percy were official wed. In early 1818 Shelley and his wife left England and Shelley produced the majority of his most well-known works including, Prometheus Unbound. It was in 1822, not long before he was meant to turn 30, Shelley was drowned in a storm while sailing in his schooner on the way to La Spezia, Italy. 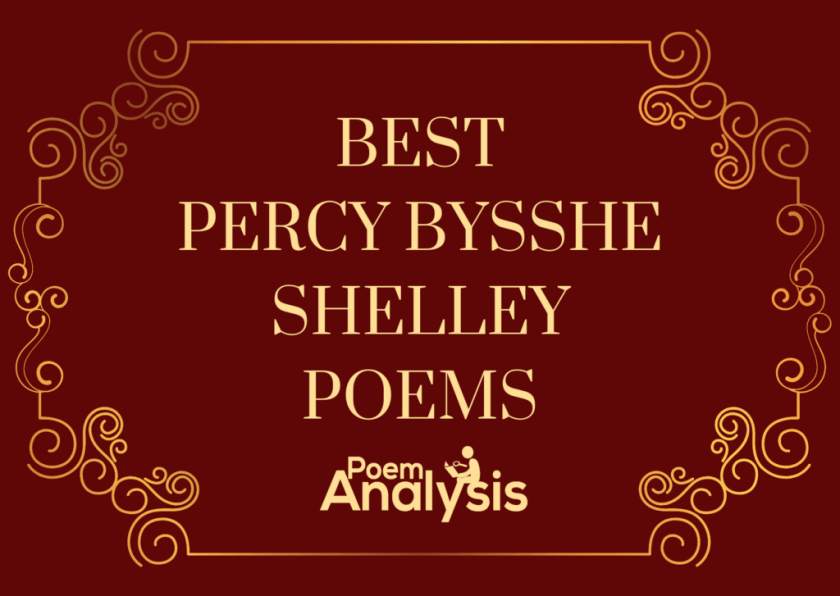 This poem was first published in 1816 in the collection, Alastor, or The Spirit of Solitude: And Other Poems. It is about the fleeting nature of human life,  human emotions and actions. He begins this piece by taking everyday elements of human life and comparing them to human nature itself. He speaks on the beauty of midnight clouds blocking the sun, how quickly they move through the sky and then are gone. Just as human life, and the joys we experience are fleeting.

The second half of this poem speaks directly on human emotion and action, how these emotions may appear to be different, such as sorrow and joy, but in reality they are all the same. Each way of living one’s life, whether through embracing or casting out woes, will end in the same way. The poem concludes by making the statement that nothing in the world lasts forever except mutability.

This famous piece of poetry describes a ruined statue of a king in an empty desert. The statue has a powerful messaged emblazoned on it saying “Look on my Works, ye Mighty, and despair”. But, considering the other details that have already been provided to the reader, it is clear that none of these works have survived. Any great cities or monument the king built have fallen.

The poem was published in 1818 and published the same year in The Examiner of London. Nowadays, it is frequently anthologized. Historically, the source of the name Ozymandias is also interesting. It refers to the Egyptian pharaoh Rameses II. The history of this pharaoh, and the acquisition by the British Museum of a segment of a statue of the king, are thought to have inspired Shelley to write the poem.

Stanzas Written in Dejection, near Naples

‘Stanzas Written in Dejection, near Naples’ describes the feelings of alienation a speaker suffers from and how he attempts to sooth his pain with nature. Shelley chose to utilize the verse structure made popular by Edmund Spenser in The Faerie Queen. Through a varsity of vibrant images, Shelley’s speaker describes and relays what he sees. His emotions begin to play a larger part in the narrative as he is not enlivened by the sights he sees. Instead he meditates on his own depression. He lists all the things he does not have but wishes he did.

This leads him into a dark place he can’t get out of.  He feels as if the world does not care for him— he is a man alone. Eventually he tries to look more objectively at his situation and remind himself that time passes and this moment, if not enjoyed will go to waste just like all the others he took for granted.

In this poem Shelley utilizes his knowledge of Greek mythology, and love for its stories, to mourn the death of the mystical figure Adonais. The poem was written with Shelley’s friend, and fellow poet, John Keats in mind. Keats had recently died of tuberculosis at the age of twenty-six. As a representative of Keats’ youth and beauty, Adonais also died young. His untimely death was caused by a boar, but Shelley takes the principle and tragedy of youthful death and applies it to his friend. He attributes the cause of Keats’ death to the literary elite who did not react well to what is considered by some to be Keats’ masterpiece, ‘Endymion’.

‘The Question’ tells of a dream in which a speaker encountered a vast forest of pristine, blooming flowers. It is interesting to consider when reading this poem where Shelley was in his life at the time he composed the words. Shelley’s later years were especially tragic. He and his wife, Mary Shelley, lost all three of their children and he might’ve chosen to craft the dream world in ‘The Question’ (filled with innumerable flowers) as kind of retreat. That being said, the first person narrator in ‘The Question’ is not necessarily the poet himself. There is no clear context to allow one to say for certain one way or another.

‘The Indian Serenade’  is a dreamlike lyrical love poem told from the perspective of a desperate lover. The events of the text are rather straightforward. Shelley’s poem begins with the speaker waking from a dream and feeling the peace of the moment in which he is in. He was entrenched in a very life-like dream of his “Sweet”. He jumps to his feet and her spirit leads him the chamber window. The speaker eventually collapses on the grass and begs his “belovèd” to let him in and rain down “kisses” upon his “pale…cold” cheeks. He needs an infusion of life.

Ode to the West Wind

‘Ode to the West Wind’ is one of Shelley’s best known poems. He wrote it in 1819 just outside of Florence, Italy. It was published a year later as part of Shelley’s collection Prometheus Unbound, A Lyrical Drama in Four Acts, With Other Poems. Within this text the wind represents the role of a change bringing, poet figure. The poet is depicted as the voice of reason, bringing revolution. Scholars have considered ‘Ode to the West Wind’ a response to the loss of his son William in 1819. It is also one of a few, including ‘The Masque of Anarchy’ that speaks on the roll of the poet in society.

The poem is made up of five sections, known as cantos. The first three speak on the wind’s effects on the earth, air and ocean. The final two are directed at the wind itself, he asks it to elevate him and take him on as a wandering companion.

The cold earth slept below

The cold earth slept below was published in Hunt’s Literary Pocket-Book in 1823, a year after Shelley’s death. It was later included in the collection, Posthumous Poems compiled by his wife,  Mary Shelley. It describes the state of the world on a freezing winter night and the discovery of a lover’s body.

After a walk, the speaker moves towards a light in a bog or swamp. It turns out to be the glare from his dead lover’s eyes. She was also drawn to this place. But, she was unable to make it back and died there.

‘To a Skylark’ is an ode to the “blithe” essence of a singing skylark and how human beings are unable to ever reach that same bliss. The poem begins with the speaker spotting a skylark flying above him. He can hear the song clearly and feels that it is “unpremeditated,” unplanned and beautiful. The speaker is stunned by the music it produces. He is entranced by its movement as it flies into the clouds and out of sight. Although he can no longer see it, he is still able to hear it and feel it’s presence.

The bird represents a pure, unbridled happiness that Shelley is desperately seeking and was inspired by a walk the poet took with Mary Shelley in Livorno, Italy in 1820. He compares it to moonbeams and raindrops, but still the song is more beautiful. Then, to a “high-born maiden” and a glow worm. Finally, the speaker finishes his metaphors and similes and declares that there is nothing that will ever match the beauty of its song.

On the Medusa of Leonardo Da Vinci in the Florentine Gallery

In this poem Percy Bysshe Shelley describes the terrifying gaze of Medusa. Then, goes into details about a speaker’s perception of her life. The poem begins with the speaker outlining how it might feel to look straight into Medusa’s eyes. He thinks that one would be able to interpret her thoughts through her shadowed gaze. She does not, he imagines, exist in a happy place. The speaker assumes she mostly focuses on anguish and death.

As the poem continues the speaker describes how the snakes move on her head. They shed their skins endlessly throughout time. Medusa is on a rock in the water, looking down at the smaller creatures below her. It is their mistake, coming within range of her gaze, that allows the snakes to gleam their “brazen glare.”