10 Poems that Use Personification

When seeking out poems that make use of personification there are an endless number that a lover of poetry can turn to. On this list, you will find some of the best, taken from writers of different centuries and vastly different life experiences. These range from the work of Carol Ann Duffy to that of Samuel Taylor Coleridge. 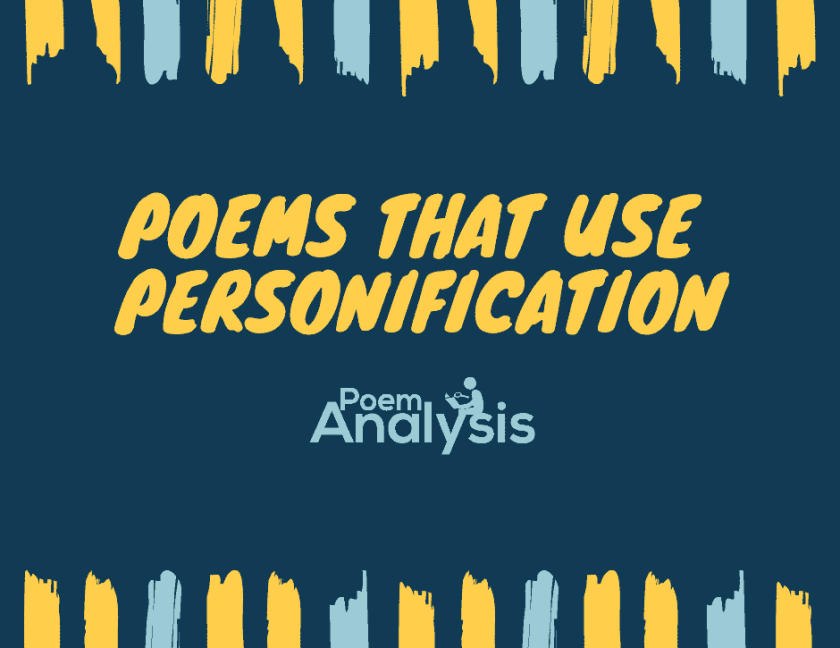 Poems that use Personification

‘Human Life’ describes a speaker’s frustration with the idea that there is in fact no purpose to life, nor is there existence after death. The speaker meditates on what happens after one dies. There is nothing to penetrate the “gloom” and “doom” that is death. Life is brief, a “flash,” and is then over. But, the speaker considers life and death very differently. Coleridge utilizes a metaphor that uses personification to paint an image of “Nature” crafting a “vase” that is never finished. It is done meditatively but pointlessly. Due to the fact that the creation has been made without a higher purpose in mind, it is said to be a “Blank accident” and an “anomaly” of nothing.

‘Love’ was published in Boland’s 1994 collection In a Time of Violence. It speaks on themes of love, regret, and memory. The highs and lows of love are emphasized in this text. The poem begins with several images of a small, simple town. These are contrasted with those of a hero, entering into death. The speaker directs her words to her partner, telling this person about their lives together and how there are moments she wants to return to the past. Despite the basic surroundings, they discovered important things there. These include that “love had the feather and muscle of wings  / and had come to live with us”. Love is personified as something physical and recognizable.

‘Magdalen Walks’ describes the coming of spring and the vibrant, continually moving elements that herald its arrival. This poem, on the surface, is simple. It is about the beginning of spring and its various elements. There are the trees and the birds, as well as the flowers, and they all need one another.  The “pine-tree” is spoken of as listening to “whispered” stories about love. The tales make it “rustle with laughter” until it “tosses” its green leaves around. They all improve upon the land and seem to communicate via their various activities. With a little bit of background knowledge, the poem can be placed physically in England, specifically at Magdalen College, Oxford where Wilde went to school.

The Parting of the Year by Anna de Brémont

In this poem, Brémont describes a speaker’s fear of facing an unknown future in the coming year. The speaker describes how it is the last hour of the last day of the year. She is deeply saddened by this fact. Brémont uses personification to allow the “old year” agency. It is just as sad about this parting as the speaker is, perhaps more so as it signals “his” death. In the second half of the poem, the afterlife opens up and calls to the “Old Year.” It is his time to move on to death. The final midnight hour is over and with a trembling sigh the “Old Year” vanishes into the “starlight.”

In ‘Coming,’ Larkin describes a culmination of blissful emotions within a speaker that is a result of the arriving spring season. The poem begins with the speaker stating that he is living within a world that is filled with a certain kind of emotional physicality. The world around the speaker is filled with the sound of a bird singing from within the garden. In the second half of the poem, the speaker is looking forward in time. He sees the coming spring, and wishes, through the use of repetition, for its swift arrival. Larkin makes interesting use of personification when he describes how the emotional landscape touches the physical space. The sound of the thrush is so arresting that the “brickwork” of the neighborhood houses is said to be “astonished.”

How happy is the little stone by Emily Dickinson

Within ‘How happy is the little Stone’ Dickinson speaks on themes of happiness, peace, and the purpose of life. A representative stone stands in as a symbol for ideal happiness and a perfectly aligned life devoid of stressors. This is a short yet charming poem that depicts happiness through the images of the stone. It rambles along the road by itself, it doesn’t care for human problems. The stone exists in the universe without complication.

This poem speaks about the nature of grief and how poets play a role in the preservation of memory. ‘Aspens’ begins with the speaker describing the sound of the aspen trees. Thomas uses personification to describe the way they talk amongst themselves. This is implicitly compared to the way that poets or thinkers do. Then, just as poets, they are at the crossroads of life’s great choices. Here, they are able to call forth the ghosts of the past and fill the area with a gloomy representative of loss and grief, likely associated with World War I.

This is one of the longer poems on this list. It uses personification, as well as other techniques like repetition and enjambment. ‘Bluebird’ describes a speaker’s relationship with his own emotions and inability to confess that he cannot always be strong and clever. The poem begins with a refrain that describes the existence of a “bluebird” in the speaker’s “heart.” It represents his kinder and gentler emotions. It is hidden inside his chest and there are only a few moments that he lets it out freely.

In this poem, Duffy describes the way that love letters transition from being full of devotion to containing nothing by recriminations. The speaker begins by describing how lovers from all different places keep and store their letters from the past. Some, she states, are kept in boxes where they cannot be seen unless the keeper seeks them out. The letters are filled with various moments of emotional experience, some good some bad. She states that when one is finally ready to have the letters surface again, perhaps long after the relationship is over, they come out as “sore memories blinking” in the light of the room. The writer of these letters will then be confronted by a version of themselves they are no longer familiar with.

I Looked Up from My Writing by Thomas Hardy

‘I Looked Up from My Writing’ is a contemplative piece in which a writer is confronted with his own ignorance and irresponsibility. At the beginning of the poem, a writer, who is perhaps meant to be Hardy himself, is startled by the presence of the moon directly outside his window. He initially believes the moon is there to see what he is writing but is soon proven wrong. The moon is personified, and “she” states that she out looking for the body of a man who killed himself by drowning.  She is said to be both meditative and misty. She is shrouded in the cloudy sky, slightly obscured from view. This lends a feeling of mystery to the poem while further expanding on the speaker’s use of personification.

Home » Explore the Greatest Poetry » Poems that Use Personification