10 of the Best Philip Larkin Poems

On this list, readers will find ten of the best Philip Larkin poems. They are defined by his characteristic style and relatable subject matter.

The poet was born in Coventry, England in August of 1922. His father introduced him to literature at a young age and it was passion he pursued through school. In 1945, 10 of Larkin’s poems were published in Poetry from Oxford in Wartime. This publication was followed by two novels, Jill and A Girl in Winter. The following years saw the publication of his collection, XX Poems, as well as the  printing of a few individual poems including, “Toads” and “Poetry of Departures”. He became the librarian at the University of Hull in 1955 and that same year his collection, The Less Deceived, was released. It was this collection that solidified his reputation as one of the most important writers of the 20th century.

Over the following years Philip Larkin was offered an OBE, which he declined, and worked to compile an anthology titled The Oxford Book of Twentieth Century English Verse. Due to the the success of this volume he was awarded a fellowship at All Souls College, Oxford. He was also granted a number of honorary degrees. In the middle of 1985, Larkin entered the hospital for a problem with his throat, which turned out to be oesophageal cancer. He went through an unsuccessful operation to remove his oesophagus and he died in hospital in December of 1985. After his death it was discovered that Larkin held some controversially racist and misogynistic positions. But he is still considered to be one of Britain’s best loved, 20th century poets. 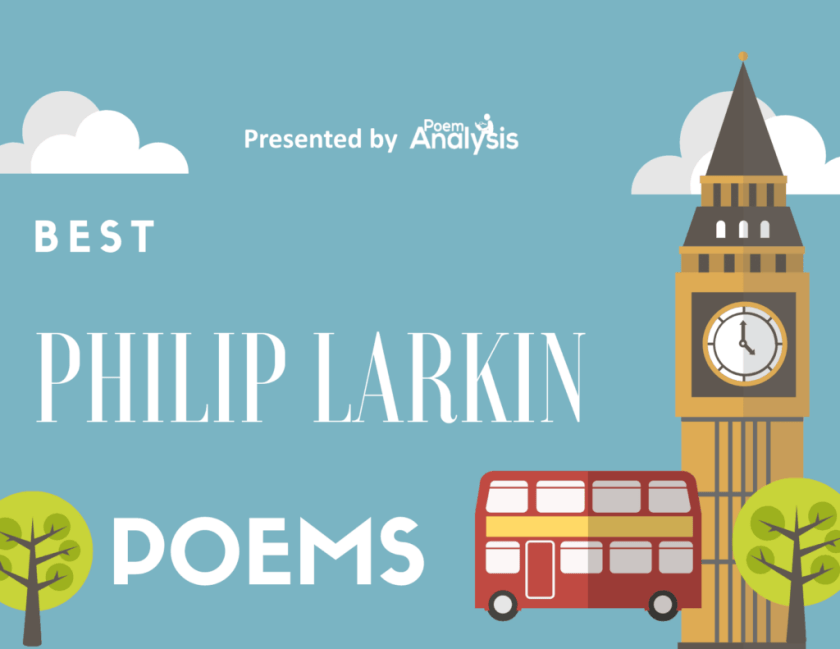 Within ‘Church Going’ Philip Larkin describes the emotions experienced by a speaker who is inexplicably drawn to churches. This speaker can’t help himself when he sees a church. He is driven to explore them and try to understand what they were really for. The speaker enters into a church at the beginning of the poem, a fact the reader has to interpret as the speaker does not know why he’s there. The bulk of the poem is focused around the importance of churches and the need for them to be maintained. He sees them as places for coming together and acceptance of one’s common humanity with the rest of the world.

This poem is perhaps Philip Larkin’s most popular. It shares the a title with his 1964 collection of poems and is one of his longest. It tells of a train joinery from Kingston upon Hull through the countryside. The speaker takes in the sights and sounds of the trip and most importantly the people getting on and off the train. There is a group who appears to be part of a wedding. At first he speaks cynically about weddings and those who attend them, but his words become more meaningful when he addresses the newly weds and the difficult future they face.

This poem tells of the two toads, or pressures, that exist within a speaker as he struggles to free himself from everyday life. Larkin’s speaker states that there is one thing that plagues him more than anything else, a toad. This toad, represents work, exterior obligations and financial pressures. It is always there, forcing poison into his life. Perhaps, he wonders, he’d be happier if he were poor. He speaker looks at the poor people around him and thinks the they look happy enough, and none of them ever seem to starve. Eventually, and thankfully, he comes to the conclusion that he doesn’t have the guts to give up his comfortable life.

In ‘Sunny Prestatyn’ Larkin exhibits an interest (as he he did within a few other works in The Whitsun Weddings), in consumerism and and advertising. Rather than speaking simply on the greed of companies, or the susceptibility of human beings, Larkin chose to address a larger vision of life. There is something extra poignant about this metaphor.

The poem begins with the speaker describing a poster advertising “Prestatyn,” a resort town in Wales.The poster is of a smiling, perfect woman.  It is quickly defaced by the residents. The woman’s body was drawn on, and the sexual innuendoes present in the ad were enhanced. The reaction of the community to the ad can be read as a protest of sorts against the idea that a perfect, pure “sunny” life is possible.

This piece describes difficulties associated with aging and how the speaker is always going to wonder about his own legacy. Aging is to the speaker, an experience comparable to swaddling falling away from one’s body. These white pieces of cloth float in the distance and contain all the sounds of a tenement. They are his histories, places he can no longer reach. Throughout the poem the years of his past are referred to as something as light as swaddling or clouds, but then later appear to be hard to navigate through like knee high weeds, and scary to encounter, like icebergs. The poem ends without a conclusion to the question of the speaker’s legacy.

In ‘Arrivals, Departures,’ Larkin’s speaker describes the comings and goings of ships. The poet makes use of a narrator who is unable to resist the sound of their call, no matter when it comes. Throughout the text the speaker deals with a dilemma, to leave or not to leave. The boats could provide him, and his companion, with the chance to move on, a least for a time. At the end of the poem he makes the decision to go. When he hears the sound of the horns, the speaker and his companion rise and make their way to the dock, repeating the same cycle.

It is generally thought that this piece was very personal to the writer. It perhaps tells of Philip Larkin’s own emotional struggle to maintain a relationship with his fiancé while in love with another woman.There were two women the poet met twenty years ago and who are still important in his life today. One was beautiful and hard to talk to, and the other had the opposite traits. He dated the latter for seven years. The relationship finally came to an end when they both decided he was too shallow and easily bored to truly love someone. The other woman still haunts him though, the one who was beautiful and hard to speak to.

While death is not mentioned by name in ‘Going’ it is very much the main focus. In line three alludes to it. In this instance Larkin refers to it as that which “lights no lamps”. By the end of the poem one has entered into the unstoppable “evening” and come to the understanding that there is no way to fend off its arrival.

The poem was originally published in 1955 in Philip Larkin’s book, The Less Deceived. Larkin originally planned to title the work ‘Dying Day.’ This piece of information makes it even clearer that the work is about death. Larkin also wrote a companion piece titled, ‘Coming’ that discusses the emotions centred around the arrival of spring.

This poem is a depiction of the speaker’s own emotional state and the inner workings of his mind.  Philip Larkin presents an interesting picture of life from the outside and the inside in ‘If, my darling.’ The speaker wonders what his “darling” would think of the inside of his mind. It doesn’t take him long to come to the conclusion that she would not have a thrilling experience adventuring there. He sees his mind as a dark, sparse interior that is unstable and foul. The speaker’s own judgements become clear as he considers the impact his true self would have on his lover.

‘Maiden Name’ was published in 1955 in Larkin’s collection The Less Deceived. The main themes in the poem are identity and the loss of identity. Philip Larkin was interested in dealing with the institution of marriage. This is something that was common within his work. Throughout the poem the speaker addresses the listener as “you”. The use of second person makes the reader accountable for the intended listener’s actions.

It is thought that the poem is based around a relationship Larkin had with a woman named Winifred Arnott. The two met at Queen’s University in Belfast and became close friends. The intimacy they shared ended when she left the city to move to London and became engaged to another man.