10 of the Best Poems about Rain

Whether it is depicted as a cheery, life-giving force, or a dark, mundane gloom, rain is a popular subject about which many poets have written. The poems on this list are all focused around the power of rain and how it can transform landscapes, those outside as well as those inside. 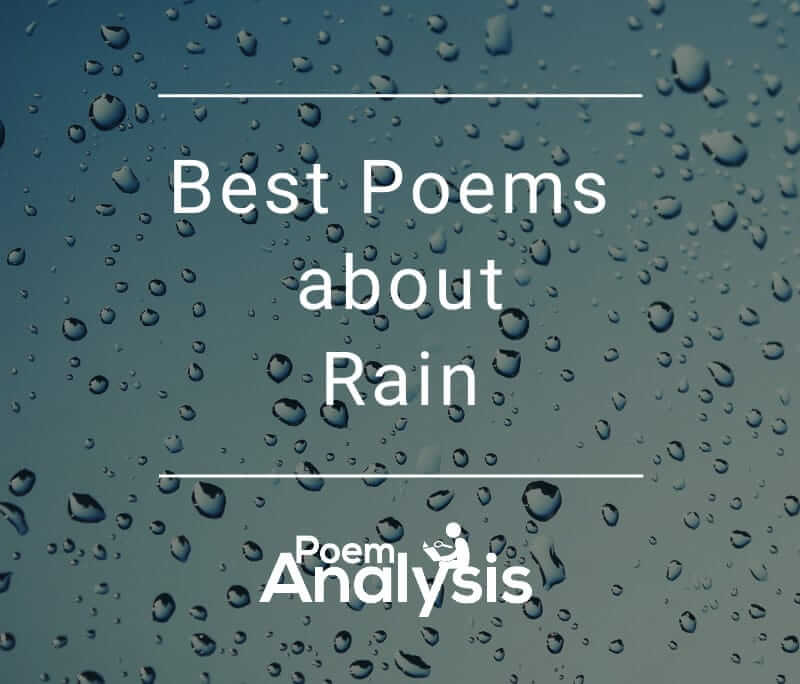 The first poem on this list is one of the best. While it isn’t one of Longfellow’s best-known or most loved poems, it is certainly powerful. Following a consistent rhyme scheme, the three stanzas of ‘The Rainy Day’ depict rain and the dark, drab misery it can bring with it. The first stanza describes the outward state of the world, the second the internal state of the poet, and the third transitions to the speaker’s attempts to improve his own mood.

After Rain by Segun Adekoya

In this poem, Adekoya describes the impact of extreme heat on a town after the end of a rainstorm as well as the different ways that people and animals react. The poem is focused on the region of the Sahel in Africa. The rain has ceased and now a depressive heat has descended on the town. Bugs have come out in droves and are endlessly flying around and stinging everything in sight. All who live in this area dream of an escape to a cooler a paradise where it will not feel as if their head is on fire. Some of those in this area are pleased that it has finally stopped, others know that the dry times are worse and that the heat will go on for too long.

This image-rich and the evocative poem is also known by a secondary title, ‘A drop fell on the apple tree’. Within its short lines, the speaker describes the arrival of the rain to a summer landscape. Everything is dry and then all of a sudden those living in this land see one drop of rain and then the next. The realization that it’s about to rain comes slowly, especially in combination with the blue sky.

‘Rain’ was written with a younger audience in mind, as much of Stevenson’s poetry was. The poem is only four lines long and describes the all-encompassing nature of rain. It falls everywhere, on everyone. It is “falling all around,” the first line begins. The rain touches the field and tree, as well as “umbrellas here” and “ships at sea”.

Horses and Men in the Rain by Carl Sandburg

This is a powerful, image-rich poem that encourages storytelling and the discovery of meaning in the past. Rain is one of the most prominent images in ‘Horses and Men in the Rain’. It is depicted through a series of images that show the normal lives of those who appear to be less fortunate than the speaker and the listener. These are hardworking men and boys who cannot sit by the fire and wear dry clothes. The poet also takes there reader to the past where men walk in the rain on the ancient Silk Road. The speaker wants to go deeper and write on the lives of those long since passed away. There is certain gloomy nostalgia to this poem that is heightened by the rain imagery.

‘Rain’ by Edward Thomas was written in 1916 while Thomas was in the trenches, serving in World War I. It describes a speaker’s relationship with death as he contemplates the future if he has one. The poem begins with the speaker stating that there is a constant stream of rain pounding down on the roof of his “bleak hut.” His conditions are not good. The speaker is alone, within a trench, somewhere in the fields of the First World War.

While there he contemplates his own mortality and the nature of death itself. He describes how the rain is not all bad as its been able to wash him “cleaner” than he has been in a long time. It has revealed itself to be the one love he can depend on. The final lines see the speaker reminding himself that death is a constant throughout all the suffering he is enduring.

In this lesser-known poem, the speaker describes a rainstorm and the impact the scene had on one person and his perception of the world. The speaker begins by describing the sky as ink-filled. The dark clouds gathered and people began running for cover. Despite this fact and the rational-seeming choice to hide out until the storm passes, he feels a connection to the rain. This is a deep connection, one that speaks to the heart of why poems about something as universal as a rainstorm is an appealing topic on which to write poetry. The connection exists in a way that includes his whole body and becomes spiritual at the end of the text. He speaks on his notebook, the impact of the rain on the storefronts, and its ability to cleanse one’s mind and body.

‘Still Falls the Rain’ is one of Sitwell’s best-known poems. It was written during the London Blitz and depicts the city, human suffering, and the deeper connections that she and the other resident of London have to one another and their city. There is also a strong focus on religious imagery. The rain is dark “black as our loss” and is beating on the world with a sound that is “like the pulse of the heart”. The rain falls on the “Tomb” on the feet of the “Starved Man upon the Cross”.

In ‘Rain’ Paterson describes the way that rain acts as an equalizing force capable of washing away one’s concern for the past. The speaker expresses a love for rain-focused films in the first lines of the poem. He loves it as long as it a ‘deluge”. The opening shot of a film, if it focuses on rain, is entrancing to him. He continues on to say that it doesn’t matter how bad the film gets from there on out, as long as there was rain at the beginning. In the final lines of the poem, it becomes clear that the references to film and rain also relate to life in general. The speaker is using rain as a way to remove the damage of previous experiences and return to a purer state of being. The “ink, the milk, — the blood,” it is all forgotten.

Song for the Rainy Season by Elizabeth Bishop

In this poem, the speaker begins with a complex and stereotypically “Elizabeth Bishop” depiction of a house. She addresses the listener through short lines. These make the poem a quick read but also allow each word to have as much impact as possible. Throughout the stanzas, she celebrates the natural imagery around her and the utter liveliness of living forces. The rain is described powerfully. It is a force capable of giving and taking away life.