10 of the Best Poems about Rainbows

On this list, readers will find a few of the best poems written about rainbows. Some are lighthearted and whimsical while others are far more thoughtful and deep.

From Emily Dickinson to Thomas Campbell, each poet on this list found a reason to write about the impact of a rainbow in their own life. Some of these poets saw them as harbingers of peace, spring, or joy, while others addressed them on their own terms as wondrous creations, lending their colours to the rest of the natural world. 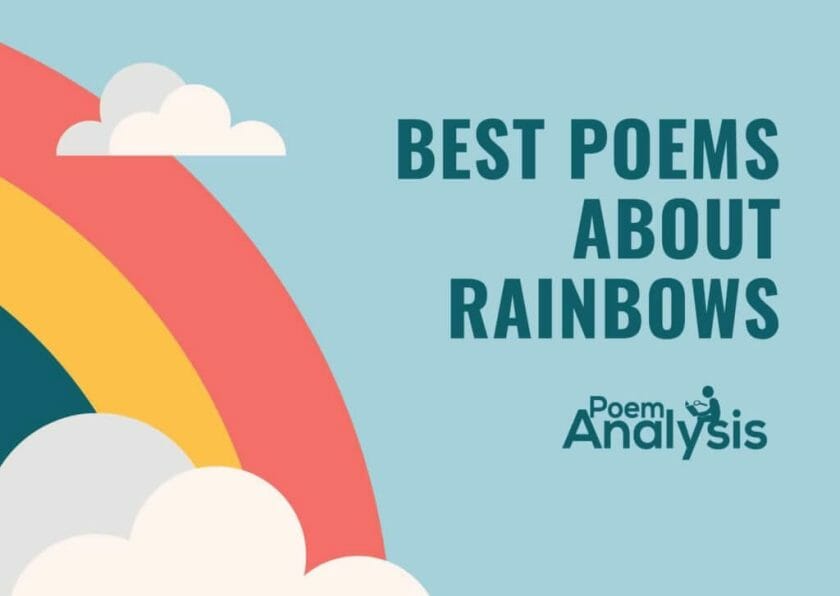 My Heart Leaps Up by William Wordsworth

One of Wordsworth’s best-known short poems, ‘My Heart Leaps Up,’ is also known as ‘The Rainbow’. It speaks on some of the poet’s most familiar themes, youth, age, and nature. He speaks at the beginning of the poem of how the sight of a rainbow can make his heart leap up and send him back to his life when he was young. He remembers being a youthful boy and experiencing these same pleasures in a pure, innocent way. They return to him “now” as a “man”. He knows that when he grows old it’ll be the same, and if it’s not he’d rather die.

The Rainbow by Charles Lamb

Speaking on similar themes to other poems on this list, ‘The Rainbow’ by Charles Lamb depicts the world post-storm. The speaker addresses “How sweet yon rainbow” it to his eye after the rains have past. In this particular poem that speaker addresses someone close to him, a woman named Matilda. Together they investigate the world, its colours and beautiful blooming flowers. They count the colours in the sky “Each in each so finely blended” and contemplate their origin.

The speaker knows that knowledge is not required to admire nature and that concludes by declaring that every color, face, “every living thing,” “every check and every eye” comes from the “rainbow’s colours”.

To the Rainbow by Thomas Campbell

A longer poem than most on this list, ‘To the Rainbow’ directly addresses a rainbow in the sky as a “Triumphal arch”. The speaker admires it, but knows that nothing in philosophy can teach him what it is. There is a deeper pleasure and meaning in nature than any teacher can convey.

The Rainbow Never Tells Me by Emily Dickinson

Making use of the style and language familiar to lovers of Dickinson’s poetry, ‘The rainbow never tells me’ is a short two stanza poem. In the text, the speaker addresses the rainbow as a woman who is “more convincing / Than Philosophy”. She can understand the world better by looking at the rainbow than any of the complex words of writers.

The second half of the poem speaks on rebirth through the image of flowers returning to grace our eyes every spring. Neither rainbows nor flowers can speak, but their presence says a lot.

The Rainbow by Christina Rossetti

Within ‘The Rainbow’ Rossetti speaks on the superior beauty of clouds and rainbows in comparison to ships and bridges. The poem begins with the speaker describing how both ships and boats sail. One can find ships on the sea and boats on the river, but both operate in the same way. She adds, that clouds are in the sky and they also sail. They are able to do the same things that man-made water vessels can, and they are far prettier.

In the next lines, she compares bridges, which are quite lovely as well, to rainbows. The winner of this competition is clear. The rainbows, which can reach from the earth to the sky are far more beautiful than the simple bridges that go over rivers.

‘The Rainbow’ by Walter De La Mare is a short two stanza poem that depicts a “lovely arch / Of rainbow” the speaker saw in the sky. It was a temporary beauty, there one minute and gone the next. The poem’s mood is peaceful and wistful as the speaker reflects on the calmness of that moment and the quiet of the passing rain.

Some Rainbow—coming from the Fair by Emily Dickinson

Another lovely Emily Dickinson poem that addresses a rainbow and its impact on the wider natural world. Dickinson uses the rainbow as a harbinger of spring and all the beauty that’s going to come with it. She connects the purpling the rainbow to that of peacock feathers, using alliteration to create a pleasing rhythm. There are also images of stirring butterflies and other small creatures that jump along the banks of a pool. Everything is moving, it’s all coming alive with the arrival of the sun.

The Rainbow by James Thomson

A simple yet beautiful poem, The Rainbow’ describes the pleasure that one can take if they listen to the music of nature. The speaker emphasizes the way that all the life on earth comes together to create a concert while focusing in on the “bow”. This ethereal and sublime sight crosses the sky and entrances all. Thomson’s speaker dismisses Newton’s scientific understanding of the phenomenon and instead turns to a boy’s wonder-filled reaction to it.

This short, lyrical poem speaks about the winter season. The poet begins by outlining the “cutting” and “keen” nature of the season. It can be painful and unpleasant. Clare unseeing personification to depict the winter winds as “grinning” and the season as an “enchantress’ that reigns over every living creature.

In the second half of the poem, there’s a turn. He addresses the fact that everything can change when the sun comes out and “thy bright rainbow gilds the purplestorm”. He recalls the enchantment of the season turns to entrancement and the misery to love.

The Kingfisher by W.H. Davies

In this piece, Davies addresses a “kingfisher” bird and how it was given “birth” by a rainbow. The rainbow left all its hues to the bird. The creature goes through the world with its “glorious hues” that allow it to stand against the peacocks in the “green parks”. It is just as vibrant. It could also hold its own against the windows of kings, but it chooses not to. It is not “vain” as a human would be. Instead, it prefers the quiet.