10 of the Best Rudyard Kipling Poems

Rudyard Kipling was born in Bombay, India in December of 1865. As a boy, he took pleasure in the work of Ralph Waldo Emerson and Wilkie Collins. At the age of eleven, he was moved to Devon, England for his health. It was there he first started writing.

Rudyard Kipling’s best-known work, The Jungle Book was published in the late 1890s. This novel, along with its sequel, was produced alongside several volumes of poetry and another collection of short stories, in a four-year period. Kipling’s works, The Jungle Book as well as The Second Jungle Book, were extremely popular with children. Kipling’s life took a tragic turn in the 1930s with the death of his second child. After developing an ulcer, Kipling took his own life. His ashes were interred in Westminster Abbey in Poet’s Corner. 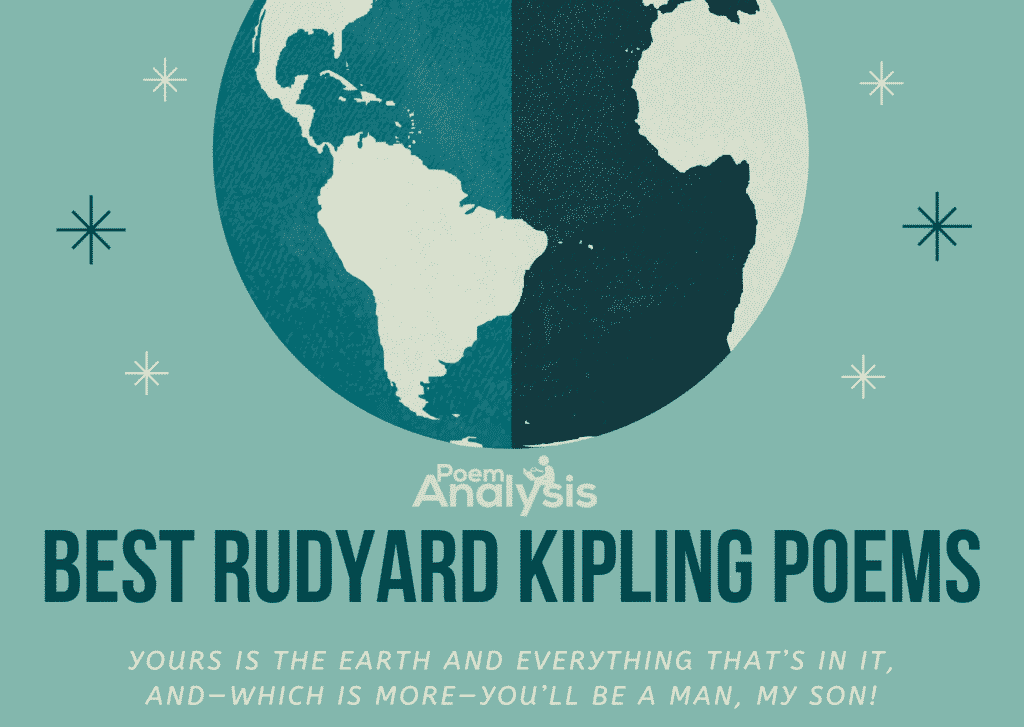 ‘If’ is perhaps Kipling’s most famous poem. It is inspired by nature and gives a reader advice on how to live their life. There are several examples in the text of adverse conditions one might come across, and how it is best to surmount them. Anything can upset one’s life, and it is necessary to be prepared for when that happens. The “If” portion of the poem is complemented by the “then” portion. Every scenario is followed by a solution. If a reader does as the speaker has suggested, he declares that they will be set to conquer the world and become a “Man”.

The Gods of Copybook Headings

In this poem, the speaker discusses the malevolent nature of progress and humanity’s eventual return to the basic principles of a good life. The word “copybook” refers to an exercise book that is generally used to practice a language. In these books, there is a heading at the top of the page. This is usually a quote or phrase which speaks on goodness or kindness. Humankind, the speaker thinks, was directed by a few tenants of common sense and goodness in the past. These past “gods” were replaced with new gods, those of “the Market Place,” or progress, growth, and wealth.

People forgot how to live their lives and the parts that make humanity human was lost. Even though people have drifted away from the copybook headings, they linger close to the human mind, ready for when they are needed. There is a cycle in this poem that Kipling is interested in exploring.  The “Marketplace” gods fail, as the speaker predicted. Humanity is again lost without direction. This is when the “copybook headings” step in and refresh the combined consciousness of the world. The cycle repeats itself.

‘Recessional’ is one of Rudyard Kipling’s best-known poems. It was written in 1897 for Queen Victoria’s Diamond Jubilee and speaks on the state of the British Empire.  Within the text, the speaker is very interested in reminding the reader of the many battles fought in Britain. He believes all British people should remember and hold these facts in their hearts. No one should forget that God saw them through dark times and brought them triumphantly into the light.

As the poem continues, the speaker flushes out his concerns about the state of the Empire. He is worried that the nation is becoming complacent and forgetful of everything they owe to God. The speaker outlines what might happen to the empire if the British people continue on this path and concludes by asking God to have mercy on his people.

This piece comes from the perspective of an English soldier in India. The most important character is an Indian water carrier, named Gunga Din though. The water carrier saves the soldier’s life after he is wounded in battle. But then, the soldier shoots and kills him. The poem concludes with the soldier feeling regret for how he treated the water carrier, and coming to the conclusion that Din was the better man.

This poem describes the aftermath of the siege of Kut-al-Amara and the lack of consequences that the politicians responsible faced for their “arrogance”. Rudyard Kipling’s speaker describes the loss of the men in Mesopotamia in the first two lines of each stanza. He speaks the fact that there is no place or time on Earth in which these “whole-hearted” and “eager” men shall be returned to “us”. These men were sacrificed by the British government.

Within the second half of the poem the speaker directly addresses the reader. He wants to know if the outrage “we” feel for what happened will be sustained, or if it will pass and those responsible will get away with what they’ve done.

The City of Sleep

Although one of Kipling’s lesser-known poems, this piece connects back to one of his most popular short stories, “The Brushwood Boy”. In the story, Kipling describes George Cottar’s life. He depicts his youth, his dreams, and his tour of duty in India. The fantastical elements of the story come together as the main character realizes, after hearing the words of this poem, that he has been sharing his dreams with a young woman. They have both dreamed of the events and locations mentioned in the text of ‘The City of Sleep’.

‘Blue Roses’ is one of the shorter poems on this list. It uses the symbol of a blue rose to represent an impossible love. To please his lover in this poem the speaker goes on a quest to find her a blue rose. She refuses to accept any other color. The speaker travels everywhere looking for this color rose but finds nothing. The world laughs in his face and eventually, he has to come home. When he does, he finds that his lover is dead. She has gone to the arms of death and he hopes that there she will find what she is looking for.

Rudyard Kipling was born in Bombay, India in December of 1865. His parents were Alice Kipling and John Lockwood Kipling and his father worked as an artist and Principal and Professor of Architectural Sculpture at Sir Jamsetjee Jeejebhoy School of Art in Bombay.
Rudyard Kipling Biography

The Glory of the Garden

This piece is about English gardens and the hard work that is needed to create a perfectly organized natural space. The poem extolls hard work over laziness and expands the “garden” to include all of England. Its beauty is in more “than meets the eye”. There is a great deal to see beyond the exterior of the country/garden. Within, there are “tool-and-potting sheds which are the heart of all,” as well as carts and pipes, “barrows and the planks”. These are the backbone of the garden and it is through their image a reader can understand how much work went into the garden’s creation.

The Way Through the Woods

Rudyard Kipling’s speaker in ‘The Way Through the Woods’ describes the changes that have come over one particular plot of forest. The speaker states that there used to be a road in the woods, but it has been a long time since “they” got rid of it, seventy years in fact. Since that time there have been new trees planted and the other plants have grown exponentially.

In this piece, there is also the “keeper” of the woods. The keeper can see the secret interactions of animals and exist among them freely. Kipling’s speaker concludes the poem by describing all the things that one might see if they were to enter the woods at night. It is up to a reader to determine how symbolic these images are and what they mean.

A charming, short poem, ‘The Appeal’ rejects any future attempts at communicating with the writer, Kipling, after he dies. Kipling was notoriously private. Before his death, he destroyed many of his unfinished works and journals, a process that was completed by his wife. He desired that he be left to rest in peace, without the prying eyes of clairvoyants or even biographers. The poem is only eight lines long but presents the reader with an interesting insight into Kipling’s opinions of life, death, and privacy.