William Shakespeare is generally considered to be one of, if not the, greatest writers in the English language. His works spanned thirty-seven plays, the best known of which have been performed for centuries, 154 sonnets and five longer, narrative poems. He is known for his fluid and structured, style of writing. His word choices, as well as the way the rhythm and images worked together to form complex, multilayered lines that often had more than one meaning.

Shakespeare’s sonnets, of which there are many, are some of the most popular poems in the English language. A few of these, such as “Shall I compare thee to a summer’s day” (Sonnet 18) and “Let me not to the marriage of true minds” (sonnet 116), feature on this list. But there are others which are less known, but equally brilliant such as “From you have I been absent in the spring” (Sonnet 98) and “The expense of spirit in a waste of shame” (Sonnet 129). Shakespeare’s works influenced a generation of writers while the Bard was still alive, but to this day there are writers in every language who take direction from his pioneering style. 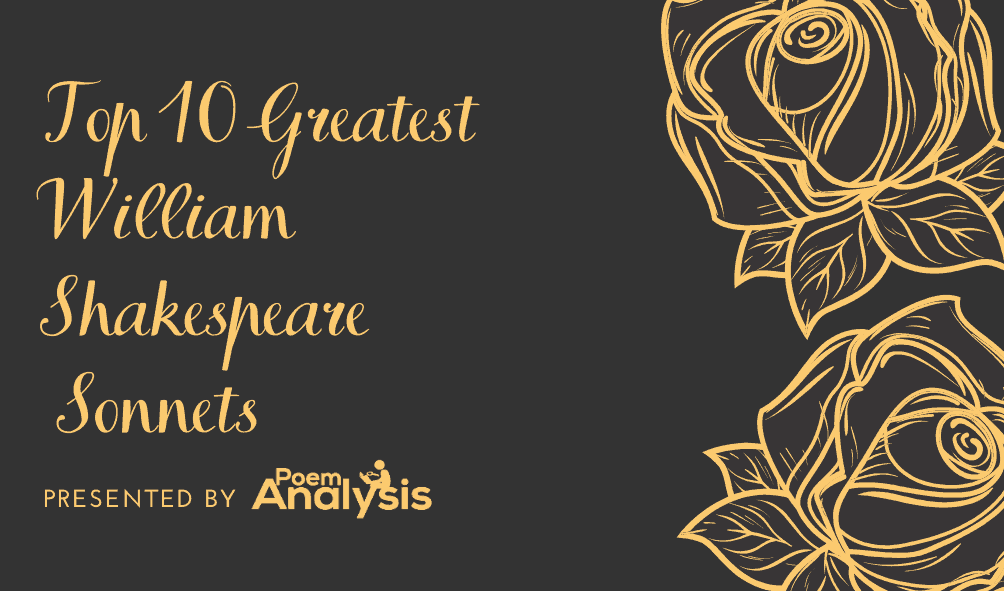 This sonnet is a haunting description of mental and emotional unrest. The speaker spends the fourteen lines struggling with his thoughts of a lost love, who is for some unknown reason, far away from him. Shakespeare uses memorable phrases such as “zealous pilgrimage” to relate the love to religious adoration. The last lines are very striking as well. The poem ends immediately after the speaker declares that he can’t find quiet for himself, or “For thee.” The emptiness beyond the final line speaks to weariness and exhausted reverence.

Love, what is it? What is it not? These are the questions the poet tries to answer in this sonnet. First, there is marriage, an institution that binds those who buy into it. It is solid and no one is allowed to ditch their partner when they change. Love is also a star in the sky. It’s there to direct ships lost at sea. What is love not? It’s not at the mercy of time. Unlike the rest of creation, love is unshakeable.

This sonnet is another of Shakespeare’s most popular. Here, the speaker compares his lover’s eyes to other beautiful things. But, it doesn’t turn out well. She doesn’t have any similarities to the natural items he points out. Her lips are dull, her breasts aren’t white enough and she walks on the ground. If she was a real goddess, she would never need to. Shakespeare loves a twist ending, and the couplet provides that. His love might be not outrageously beautiful, but that doesn’t make her less important or loveable to him. People do not need to have perfume breath to deserve love.

This is a tricky one, that’s for sure. Lust is the main subject of these fourteen lines. Lust as a representative of future longing and past longing. It is the good and the bad, the regrets and the triumphs. It is brutal, “murder’s” and “bloody.” It’s also sometimes despised after consummation. The speaker knows that the world knows that its lovers know that lust can be everything at once in the present, past and future.

Sonnet 106 — “When in the chronicle of wasted time”

Another poem about time! This time it’s in regard to the past and how poetry has chronicled it. The beauty of ladies, their passions and actions, all can be found within the verse. But, surprise halfway through, the beauty the poets were describing actually belongs to someone alive today. They were seeing into the future, predicting “you.” Luckily, poets of the past got “your” descriptions right because no one today would even have a chance.

This sonnet is perhaps Shakespeare’s most famous, or at least his most quoted. It begins with the line “Shall I compare thee to a summer’s day?” The answer is clearly yes, as the following thirteen lines are devoted to doing just that. The listener is better than even the best parts of summer. They are “more lovely and more temperate.” The most important part of the poem comes at the end where a real distinction is drawn between the listener and a perfect, warm sunny day. The summer is temporary, it isn’t going to last. But, luckily for the listener, their beauty is. Their face (and maybe mind too) are like “eternal summer.” And why is this the case? Why does this person get to live forever? Because Shakespeare wrote this poem about them of course.

This sonnet is one of a series, it continues a running commentary about a “dark lady” and her influence over the speaker. It is not just his body she is in control of, but his muse. This stops him from being able to create. She’s strangling his creativity but he can’t stop himself from being aroused by her. The “he” in the text is the speaker’s sexual needs. He can’t separate himself from his needs, and therefore his muse-self is trapped too. He’s in a vicious circle that is perpetuated by his own weakness. Even as he begs to be let go, he knows he’ll just come right back again.

Frequent readers of Shakespeare will already be familiar with his fondness for comparisons between the seasons and different states of love. But this list includes some of the most poignant examples. In the case of Sonnet 104, the speaker compares the progression of the seasons to that of age. He clearly sees the seasons changing, but looking at his “fair friend,” this person does not seem to age. But, he knows this probably isn’t true. The poem ends with the speaker declaring that everyone who thinks they’re even a little bit beautiful should know that the most beautiful person to ever live, has already been born and probably died. There’s no point in trying.

Sonnet 29 — “When in disgrace with fortune and men’s eyes”

This is another sonnet focusing, unsurprisingly, about the redeeming power of love, the speaker begins by mourning his own situation. He is lost, outcast, and separate from those he would like to know. Even if he spoke, no one would hear or listen to him. He is not a lucky man, clearly. But, perhaps he is. He has a love that comes to him, in his mind, and improves his outlook. He is like a rising bird, escaping from his earthly troubles and singing to God.

Sonnet 98 — “From you have I been absent in the spring”

Unlike sonnet 18, this sonnet has a less favourable take on summer. The speaker in these lines is in the middle of summer but isn’t happy about it. He can see the beautiful blooming flowers and animals around him, and they appear as sad imitations of the young man the poem is devoted to. In his frustration, he complains that it might as well be winter. He is despondent, detached and unsatisfied with the beauty before him.