10 Poems that Use Similes

Every poems on this list makes use of one more similes that are used for various reasons and have different effects. This technique, which includes a comparison between two unlike things using the words “like” or “as” is one of the most common in poetry. It helps a writer better explain and a reader better visualize what something, someone, or some event is like or feels like. 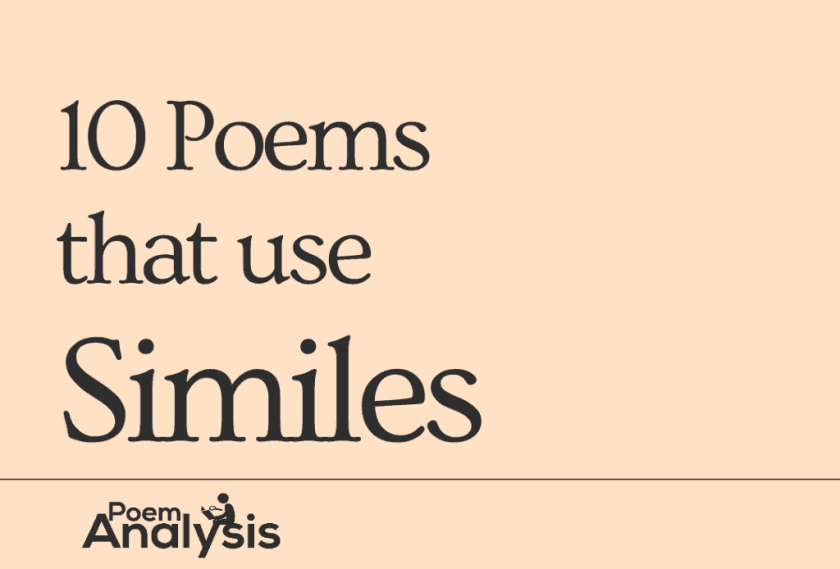 10 Poems that use Similes

The Crickets Sang by Emily Dickinson

describes the simple, yet beautiful, routine the world goes through as day becomes night. As was the case in the majority of Dickinson’s works, she uses the natural world to comment on other things, such as emotional states and experiences. There is a great example of a simile in the second stanza. As the evening progresses dew builds up and “Twilight” comes to stand still and polite like a stranger. It is an in-between time that is not quite day or night. The stranger does not know whether to come or go, it is stuck trying to find its way between two places.

The Fish by Elizabeth Bishop

‘The Fish’ is a seventy-six line narrative poem that describes a speaker’s reaction after catching a venerable, homely and large fish. The spewer in this piece, who is perhaps Bishop herself, describes going fishing and reeling in a fish that didn’t fit at all. She spends the bulk of the poem using similes and metaphors to describe what it looks She compares its scales to old wallpaper that is peeling off the walls of an ancient house and predicts that its insides will appear as though they are packed in like feathers.

One of Larkin’s lesser-known poems, ‘Deceptions’ tells of the aftermath of a young woman’s rape and the way both rapist and victim were changed. The imagery in this poem is poignant, as are the allusions and connections and contemporary life. The poem begins with Larkin utilizing a passage from Henry Mayhew’s work, London Labour and the London Poor and then goes to to describe how the woman’s grief was forced upon her when she was raped. It is something the speaker is able to “taste” now and is doing his best to convey.

As the poem progresses he the rapist. He thought that by attacking this woman that his desire would be sated. He was deceived, as the title suggests. There is a great example of a simile in the last lines which read: Forbids the scar to heal, and drives/ Shame out of hiding.  All the unhurried day, / Your mind lay open like a drawer of knives”.

Rain on a Grave by Thomas Hardy

In this moving poem Hardy details his grief over the death of his wife and his attempts to reconcile himself to it. The poem begins with the speaker describing how nature is acting cruelly towards his dead wife. There is a rain storm pounding on the grave, sending down huge amounts of water. He thinks that it feels disdainful towards her.

The poem eventually transitions from a dark beginning to a lighter end. He speaks of his wife’s grave and uses the follow simile: “Soon will be growing  / Green blades from her mound, / And daisies be showing / Like stars on the ground”.

In ‘Love Song’ Ted Hughes describes a relationship that exists between an unnamed man and woman who are deep in the joys and pains of love. The poem states that the two are doing everything they can to “keep” one another until the very end of this “moment”. They know that eventually things are going to change and that they’re going to have to go back to their real lives. In the third stanza Hughes uses several similes to compare their two different similes.

The man’s “smiles” are said to be the “garrets” or jewels of a magical palace. He belongs in a place that is nothing like the real world. On the other hand, the woman’s smiles are like “spider bites.” Both similes are powerful and otherworldly. This description also adds to the previous verses describing how the woman would like to “gnaw” on the man.

The New Year by Edward Thomas

In this poem Edward Thomas tells of a strange encounter between two men in a forest on a morning at the beginning of the year. The speaker comes upon a man in the woods in the first lines. He describes, in a mysterious tone, how he saw the “tripod man”. He was leaning over a rake and working on the leaves newly fallen from the trees.

When the speaker approached they greeted one another and the man went back to raking. There are several similes in this poem, for example “far less like a man than  / His wheel-barrow in profile was like a pig”. This line is used to describe the silhouette the speaker first encountered and how he interpreted it. Another line describes the man as a tortoise: “His head rolled under his cape like a tortoise’s”.

Sex Without Love by Sharon Olds

In this poem the speaker confronts the reader with the differencing between relationships based on love and those based on sex. She depicts aspects of both and makes the judgment that loving relationships are more important. The lovers she describes are “like read steak” and ice skaters that glide across the ice.

In this complex poem Plath speaks on her time in the hospital. In addition to her desire to enter death peacefully without the visual or emotional interruption of the bright red tulips. The similes and metaphors at work in ‘Tulips’ are one of the most important parts of the poem. The former is seen through several comparisons such as in Plath’s descriptions of her body. As well as her experiences with drugs in the hospital, and the longing she has for peace.

The Water Carrier by John Montague

In this poem Montague explores them of nature and nostalgia. The next contains memories of childhood and the chore of water carrying that the speaker frequently engaged in. Montague uses several similes in this poem. These include one example where he compares, “you,” the intended listener of the poem, to a portrait of an “Egyptian water-carrier”.

In this thoughtful and powerful poem the speaker describes her experience waking up in New York. In addition to how the rest of the world was existing around her. Angelou uses a simile to compare her speaker, memorably, to a “rumour of war”. This is a complex and interesting comparison that will most certainly mean different things to different readers.

Home » Explore the Greatest Poetry » Poems that Use Similes

A mixed metaphor is a literary device that occurs when two or more dissimilar metaphors are fused to forge a comparison, typically creating a ludicrous effect.
Full Description | Glossary