10 of the Best Poems about Stars and the Universe

The poems on this list use various images of the sky, heavenly bodies, relationships, and light. They depict everything from love, to faith, and fear. 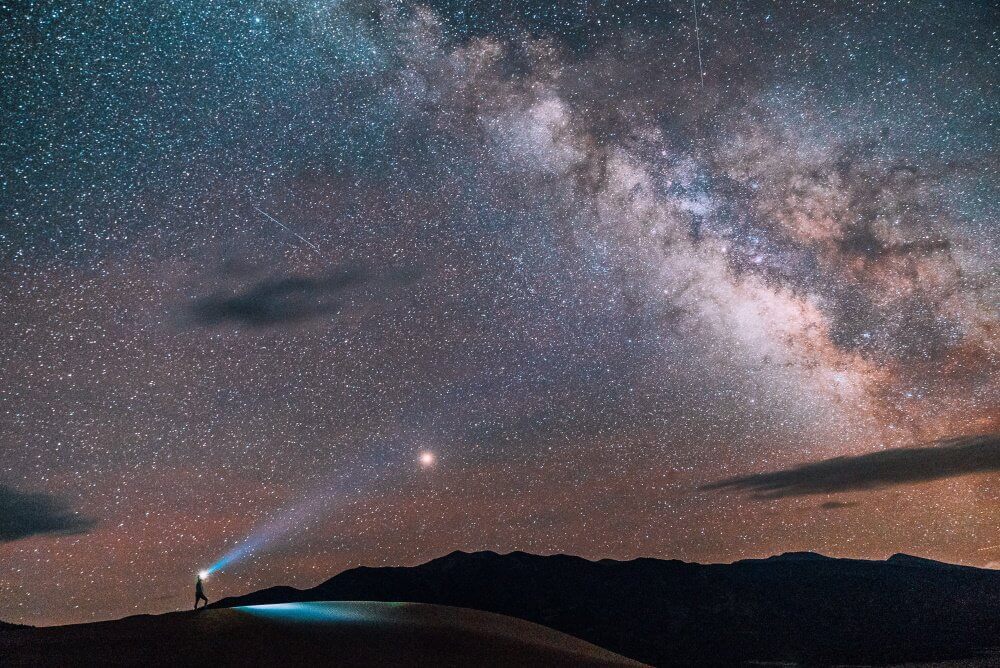 Poets such as Plath and Longfellow express feelings of fellowship and comfort when they look upon the stars. Others, such as Keats, feel split as they address a star’s numerous, unreachable qualities. None question the beauty, majesty or significance of these lights, the possibilities they represent, and or their importance

Top 10 Poems about Stars and the Universe The Light of Stars by Henry Wadsworth Longfellow

Longfellow wrote this piece in 1838. It was published in Knickerbocker’s and then later appeared in his volume Voices of the Night. Throughout the poem, Longfellow makes use of the night sky, as well as everything it contains, to speak on loneliness, and generalized human pain. He describes how he can “stand  / And smile upon” his own pain when he looks up at the “star of strength!”

I saw no Way – The Heavens were stitched by Emily Dickinson

‘I saw no Way-The Heavens were stitched’ begins with the speaker saying that the heavens were closed to her. This is a larger metaphor Dickinson uses to refer to religion and knowledge of God and the afterlife. While she was searching for some way of learning more about herself and the universe she comes from, the earth switches hemispheres. This would throw off her understanding of life even more. North became south and east became west. The universe opens to her and allows her insight into her own existence. Through these images, Dickinson engages with a need to explore, learn more, and finally find peace with life and religion.

In ‘Bright Star’ John Keats’ speaker addresses the star, likely Polaris, or the North Star. He tells it that he wishes he could be as “steadfast”, or immovable and constant, as it is. While this is a definite plus to live like a star, Keats follows it up by describing all the reasons he’d rather not be like a star. For example, he doesn’t like the idea of spending eternity alone in the dark. By the end of the poem, the speaker’s reasoning for the entire conversation with the star is revealed. It turns out he really just wanted to spend the rest of time with his love’s head on his chest.

A Night-Piece by William Wordsworth

‘A Night-Piece’ details a brief moment in which the speaker, as well as a traveller on the ground below, marvel over the majesty of the sky, stars, moon, and clouds above them. These images are used as a metaphor for the power and consistent presence of God. Even when God, or the light of the moon, in this case, cannot be seen, it does not mean it is not there.

The poem concludes with the breaking of this religiously inspired moment with nature, and the speaker and traveller are calmer, and better, for it. Their minds muse on the experience as all continues as it did before.

To a Star by Lucretia Maria Davidson

In this poem, Davidson addresses a star, just as Keats does in ‘Bright Star,’ and refers to it as the “brightly-glittering star of even”. It is, she says, a “gem” on the “brow of heaven”. The speaker also declares that if she could, she’d fly up to heaven and join the star in the sky. She praises the star until the end of the poem when she expresses her desire, after death to “soar to thee, / when this imprisoned soul is free!”

Not one of Shakespeare’s best-known sonnets, sonnet 14 or, ’Not from the stars do I my judgement pluck’ is in the series of Fair Youth procreations poems. It describes the knowledge of what’s going to occur in the future as residing in the Fair Youth’s eyes, rather than the stars. Within his eyes is where the speaker can find his own future. It is from “thine eyes my knowledge I derive.” As he reiterated in other sonnets, such as Sonnet 13, the Fair Youth must procreate, or have children, in order to continue his bloodline, and therefore beauty, on.

Within this poem, the speaker looks up to the sky and describes how distant the stars and moon are from her. But, it’s not exactly the stars she’s interested in. Instead, she uses them to craft a comparison between their distance and that of her lover. He is so far away, he might as well be a star in the sky. In what was not an uncommon turn in Dickinson’s poetry, the ending can be interpreted two different ways. First, that she is speaking on a lover, someone who she’d physically like to be closer to. Or, second, that she’s talking about God and this piece was actually religious in nature the whole time.

Stars Over the Dordogne by Sylvia Plath

This poem is not one of Plath’s most popular works but the images are quite vibrant and memorable. Within the text, she describes the natural landscape and the “Stars…dropping thick as stones”. She speaks on her familiarity, or lack thereof, with the stars and relates these relationships to her own personal life. The speaker also meditates on the state of wider human life and existence and elements of eternity.

Within this poem, Hopkins promotes the importance of looking at the stars and appreciating God’s creation in one’s everyday life. The poem begins with the speaker imploring his listener to look up at the sky and observe the stars closely. He doesn’t have scientific knowledge of space. Instead, he uses metaphors to express his appreciation for the beauty of the stars.

They come in a variety of forms in the text, but always represent something beautiful and otherworldly. The stars are physically out of reach to all those on earth, but that doesn’t mean that one should ignore their presence. It becomes clear as the poem progresses that the speaker sees the stars as intimately connected to God and his creation.

‘Winter Stars’ describes a speaker’s experience when she “went out at night alone”. While re-experiencing the world as she did as a child, she recalls “Dreaming [her] dreams on a winter night”. She “watched Orion as a girl” in another city. Teasdale expresses the passage of time, memories and the loss of youth. But in the end, as with other poems on this list, the speaker takes comfort in the presence of the stars.

Baldwin, Emma. "10 of the Best Poems about Stars and the Universe". Poem Analysis, https://poemanalysis.com/best-poems/stars-universe/. Accessed 26 January 2022.