10 of the Best Poems about Time

This is a collection of ten poems that speak on the wonders, degradation, pain and joy time can bring as one moves through life. The poets included on this list present time as the enemy of love, such as in the dark works of Edgar Allan Poe, and the more whimsical and hopeful of Carol Ann Duffy. Other poets, such as Maya Angelou speak of time as a unifying force that has the ability to bring people together. 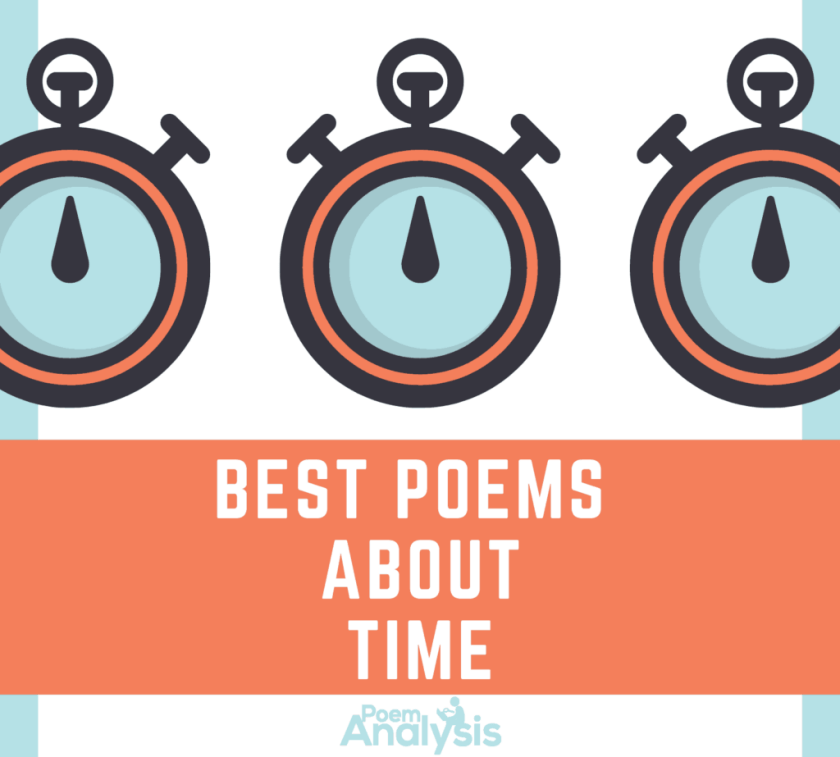 This famous piece of poetry describes a ruined statue of a king in an empty desert and how time as impacted it. The statue has a powerful message emblazoned on it saying “Look on my Works, ye Mighty, and despair”. But, considering the other details that have already been provided to the reader, it is clear that none of these works have survived. Any great cities or monuments the king built have fallen.

The poem was published in 1818 and published the same year in The Examiner of London. Nowadays, it is frequently anthologized. Historically, the source of the name Ozymandias is also interesting. It refers to the Egyptian pharaoh Rameses II. The history of this pharaoh, and the acquisition by the British Museum of a segment of a statue of the king, are thought to have inspired Shelley to write the poem.

Hope is the thing with feathers by Emily Dickinson

This is perhaps Dickinson’s best-known, and most loved poem. It is much lighter than the majority of her works and focuses on the personification of hope. But, it also presents a reader with an important commentary about time. It is a bird that perches inside her soul and sings. The bird asks for nothing. It is at peace, and is, therefore, able to impart the same hope and peace to the speaker. She can depend on it, and take pleasure from it. The text is also a prime example of the way that Dickinson used nature as a metaphor for the most complicated of human emotions.

‘Time, Real and Imaginary’ is a short, moving poem that tells the story of two children, “A sister and a brother!” Who live in a “faery place”. The two are depicted in the poem in a race, with the sister in the lead. They travel across the land, endlessly, with no regard for time (as in this world time is not a factor). Coleridge notes how the girl always runs with “reverted face” to keep an eye on her brother who is blind.

This piece was published in Rapture (2005). Time is the most important theme in this poem as two lovers take every opportunity they can find to spend “an hour together”. The speaker counts time in “thousands of seconds” as they kiss. It slows when they are together, and seems as though “nothing dark will end our shining hour”. IN the last lines the speaker presents “Time” as being against “love”. It “hates love, wants love / poor”.

This is one of Poe’s most popular poems. It follows the death of a beautiful woman, a theme that comes up throughout Poe’s works, and is intimately connected to his life. The speaker is haunted by her life and death, the time they had together, and the time that was taken from them. He thinks that he is somewhat to blame because their love was so strong, it was only inevitable that they were going to have a short time together. He eventually comes to the conclusion, through beautiful rhyming lines, that the angels were jealous and took her from him. Scholars consider this piece a memorial to Poe’s young wife (and cousin), Virginia Clemm.

Love, what is it? What is it not? These are the questions the poet tries to answer in this sonnet. First, there is marriage, an institution that binds those who buy into it. It is solid and no one is allowed to ditch their partner when they change. Love is also a star in the sky. It’s there to direct ships lost at sea. What is love not? It’s not at the mercy of time. Unlike the rest of creation, love is unshakeable.

This piece was first published in Angelou’s 1975 anthology Oh Pray my Wings are Gonna Fit Me Well. As is common within the poet’s other works, she discusses race and the various similarities and differences humankind needs to address and reconcile. She compares “Your skin” to “dusk” and her own to “musk”. One creates the “beginning / Of a certain end” and the other “the end of a / Sure beginning”. Through these simple lines she is attempting to convey t the reader that in the grand scheme of things and the great expanse of time humanity is one single force, living, breathing, and then dying.

Jerusalem [“And did those feet in ancient time”] by William Blake

This piece is the preface to Blake’s epic Milton: A Poem in Two Books, which is itself part of the Prophetic Books. The poem was first printed in 1808 and is commonly known today as simply, ‘Jerusalem’. It discusses ancient times, and times to come as progress, to Blake’s mind, degrades society. William Blake was inspired to write this text by the story of Jesus, who traveled to England, specifically Glastonbury. The poem tells of the how Christ would create a heaven in England to push back against the industrial era factories and the general mindset of the British people.

Sonnet: To Time by Sylvia Plath

This short poem discusses the comings and goings of death “in a casual steel car”. The speaker describes how human beings address death and its inevitability. Specifically, how we “scorn the dark”. In the last six lines of the poem, the speaker toasts to the great ages of the past that have long since faded into death. These include thousands of kings, the “sunblue sea” and “the legendary dragon”. These wonders— personal memories and ancient ones—are all legend. In conclusion, she states that time is “a great machine” that works, as a prison does, to “drain…the milk of stars”.

Time does not bring relief; you all have lied by Edna St. Vincent Millay

‘Time does not bring relief; you all have lied’ by Edna St. Vincent Millay speaks on the life, pain and struggle of an emotionally damaged woman who has yet to find relief from heartbreak.

The poem begins with this speaker chastising her listeners for lying to her. They told her that any pain she feels, on account of a lost lover, would fade away in time. One can assume that a great deal of time has passed, and the speaker’s emotions are just as strong as they were when the hurt was fresh. This work addresses its major theme, time, quite differently than one might expect. It has not solved all the speaker’s problems or taken away the heartbreaks of the past. She describes how her longing for her lover is omnipresent. It comes to her in the rain and with tidal changes.

No matter where she goes, even if it’s somewhere her lover never went, she is “stricken” with thoughts of him. He haunts her heart and mind, in every setting and situation.