10 of the Best War Poems

Whether fighting on the battlefield or observing the devastation, mourning and renewal of their contemporary worlds, the poets on this list depict war in its multitudes. 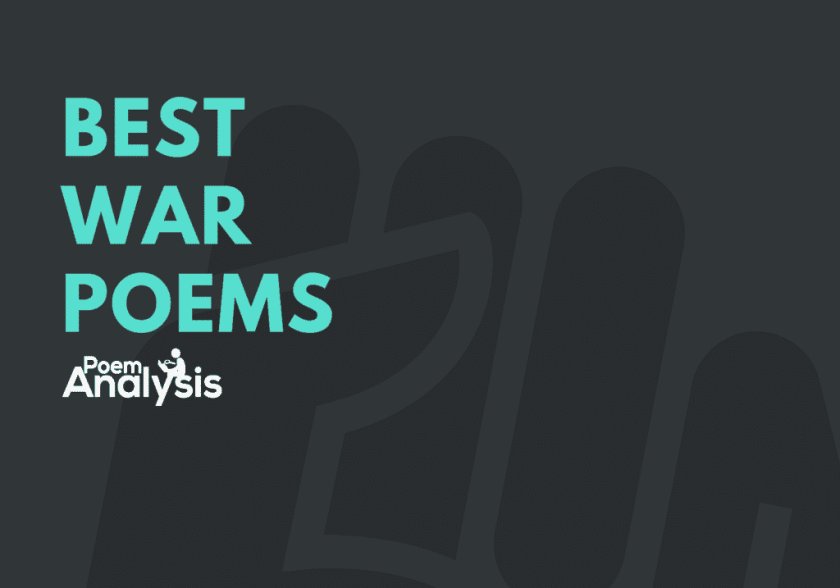 In Flanders Field by John McCrae

‘In Flanders Field’ was first published in December of 1915 in England’s Punch magazine. It would also, after McCrae’s death, be included in In Flanders Fields and Other Poems, published in 1919 by G.P. Putnam’s Sons. The poem has been translated into a number of other languages and used in advertising campaigns in Canada.

It is due to the image of “poppies…Between the crosses” that the flower has become the flower of remembrance for the men and women who died during World War I. The poem is still used today in Remembrance Day and Memorial Day celebrations in the United States, Canada and around Europe.

Joining the Colours by Katharine Tynan

‘Joining the Colours’ was published in the midst of the First World War and details the lives of Irish soldiers joining Britain in the fight. The text depicts the soldiers moving through the streets of the city, marching in a parade. The speaker, who is separate from the group, describes, utilizing metaphor and simile, the way the men appear. They were “singing like the lark” as they went “Into the dark”. The final stanza implies that the soldiers are not going to come back. They step into the “mist / Singing they pass”.

This piece is one of  William Butler Yeats’ most popular historical and political commentaries. It is based on an armed uprising in Ireland against British rule on Easter Monday in April of 1916. Yeats wrote the poem as an epitaph. It acknowledges the murdered leaders as martyrs. Within the text, the speaker appears torn. He rejects the violence of the uprising and admits to feeling that the revolutionaries were wasting their time at the beginning of the poem. But by the end, he acknowledges its importance and that of unity amongst the Irish people. The poem ends with one of Yeats’ most beautiful lines, “All changed, changed utterly: A terrible beauty is born.”

‘August, 1914’ is a short three-stanza anti-war poem that begins with the words of God. He looks out over the world and decides that humankind has “forgotten” him. But, he determines, this can change. In order to make humanity return to his side, he “smote the earth with chastening rod” because “redemption comes through pain”. In the last three lines, the “desolation” God wrought upon the earth brought the people “agony” and they cried out “‘There is no God’”.

The Shield of Achilles by W.H. Auden

This poem was published by W.H. Auden in 1952. It was then republished in a collection of the same name in 1955. Today, it is considered to be one of his best works. Throughout the text, Auden reacts to a detailed description of Achilles’ shield, as featured in Homer’s Iliad. The first details the making of the shield and what scenes were depicted upon it. By the end of the poem the harrowing scenes upon the shield are described and Achilles’ mother reacts poorly to what they portend for her doomed son.

The Bombardment by Amy Lowell

‘The Bombardment’ is a narrative poem written in the style of the Imagist movement. It is devoid of extraneous details and gets right to the heart of the drama. In this case, the text, which is divided into long paragraph style stanzas, is about the bombing of “Cathedral square”. The narrative is told by a woman, a scientist and a child. The three are all caught in the bombardment of the city and then forced to contend with the fire that rages afterward.

The Charge of the Light Brigade by Lord Alfred Tennyson

Published in 1854, ‘The Charge of the Light Brigade’ describes the failed “charge” of the British light cavalry led by Lord Cardigan against Russia in October of that same year. Due to a miscommunication, the Light Brigade was sent on an assault against a battalion of forces much better equipped than expected. Unfortunately, a number of British soldiers died during this advance, without notable gains. Tennyson published the poem only six weeks after the failed maneuver. Tennyson presents the bravery of the British forces who chose to carry out their orders with full knowledge that many of them would not survive.

‘Dreamers’ speaks on the inner lives of soldiers fighting in the trenches of World War I. The poem begins with the speaker describing how soldiers reside in the land of death and how their profession makes them subject to a more certain destiny. Throughout the first stanza, there are images representing horrors of war. These include a lack of hope for the future and dreams that occupy the minds of soldiers. While the bombs go off around them, and their lives narrow to a single point, the soldiers long for the things they once took for granted at home. This includes going to work and playing with “balls and bats.”

Break of Day in the Trenches by Isaac Rosenberg

‘Break of Day in the Trenches’ is a stream of consciousness narrative that takes the reader into the deepest, most desolate parts of World War I.  Despite all that the soldiers, including the single main character, have to deal with, the poem’s themes include the perseverance of life. In the text the solider picks a poppy, killing it. He also considers a rat that comes up and touches his hand. The animal comes to represent the plight of the soldiers. In addition to the way life can survive anywhere and anything.

Published in 1964, ‘MCMXIV’ was included in Larkin’s most famous collection, The Whitsun Weddings. Larkin’s poem describes a line up of soldiers, as seen in a photo. It goes on to speak on the larger changes that come over England as men die and society transforms. As the poem expands, Larkin presents shop fronts, coins, and children. Then, moving wider, Larkin presents images of the countryside. Later, that of Britain itself as it comes to understand its new identity mid and post-war.