Billy Collins was born in Manhattan, New York in March of 1941. His parents, William and Katherine, raised their son in Queens 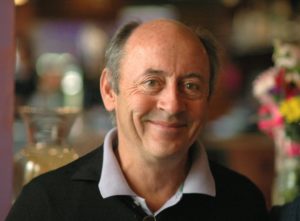 and White Plains, New York. Collins would later describe his family life as being filled with positive influences from his parents. His mother quit her job to take care of him, and was the first to trigger in him a love for literature and appreciation of the Beat Generation poets. He wrote his first poem at twelve years old.

As a young man Collins attended school at Archbishop Stepinac High School in White Plains and participated in his school’s literary magazine. In 1963 he received his BA from the College of the Holy Cross in Worcester, Massachusetts. He went on to get his M.A. and PhD. in romantic poetry from the University of California, Riverside in 1971. While at Riverside his work came under the influence of writers such as Robert Peters, Karl Shapiro and Reed Whittemore.

Later that same year he began working as a professor of English at Lehman College in the Bronx. Around this same time he founded T’he Mid-Atlantic Review.’ Over the following decade he wrote a number of poems for ‘Rolling Stone’ magazine as well as finishing and publishing his first volume of poetry, ‘Pokerface,’ which was released in 1977.

The 1980s saw Collins finish two more books of poetry, ‘Video Poems,’ in 1980, and ‘The Apple That Astonished Paris,’ in 1988. While he was producing steadily, his work was not receiving any noteworthy attention. This changed in the 1990s when a manuscript he wrote, titled, ‘Questions About Angels’ was chosen for the National Poetry Series. He would go on to win a number of prizes for his work during the 90s, including five from ‘Poetry’ magazine.

Throughout his career Collins has taught at a variety of institutions across the United States and Ireland and served as U.S. Poet Laureate from 2001-2003. He was later named poet laureate for the State of New York, a position he held for another two years. His writing has led him to make a number of notable friendships including with Paul Simon and Garrison Keillor, and allowed him to become poetry consultant for Smithsonian Magazine in 2012.

Throughout the early 2000s he did three readings of his poetry at The White House, hosted a radio program for NPR, toured alongside singer Aimee Mann, and presented two TED talks in 2012 and 2014. He is currently on the board at ‘The Alaska Quarterly Review,’ and was recently elected into The American Academy of Arts and Letters in 2016.